Today’s Chinese phrase reflects the white surprise we found when we rolled outside for the van to work – snow. It translates as “Really slippery?” Overnight we were graced with an inch or so of the glorious white stuff, which transformed the city and our morning commute.

They appear to be used to it around these part, but that doesn’t mean the impact is minimized. This light dusting had started while the streets were warm enough to melt it but not late enough for it to avoid freezing so what we had was a black ice nightmare, everyone’s ideal drive into work.

Our driver pretty much seemed to have it under control, between The Platters booming on the stereo and his willingness to use the shoulder to enhance his traffic position, we were clearly not going to suffer too great a loss of time. Following a stop at Xing Ba Kuh (remember class, Starbucks) for tea and coffee we ventured forth into the gridlock.

After from the dusting on top of the New Year’s lanterns, the first thing that caught my eye were the salt trucks – three or four guys in the back of a flatbed shoveling de-icer out onto the roadway. I was unable to grab a photo of them in action, so I’ve included one of them on break. The second thing were the women cleaning the shoulders of the highway with shovels made of plywood strapped to a pole and brooms made of tree branches all the while the morning surge slipped and skittered past them. The one resource China has in abundance is manpower, and they were putting that resource to good use this morning.

The sky was a sallow color and the sun was trying to break through the haze but it was offering nothing in the way of help with the skating rink we were driving on. The driver kept up the pace consistently bettering our position weaving and beeping while the term “ejected from the vehicle upon impact” kept playing in my mind as though on a tape loop. When he put his seatbelt, I knew we were getting serious.

But we made it intact, the only interesting thing we saw was a bus that had attempted to merge into the back of a large lorry, it’s insect antenna rearview mirrors now disconsolately bent down into the windscreen. We did make it though, in only roughly twice the time it normally takes. 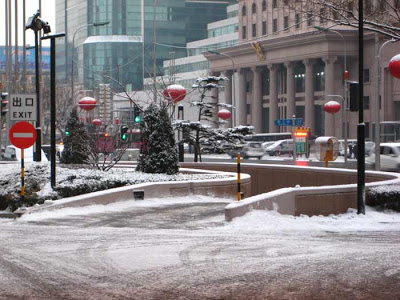 The only highlight of the workday was lunch, our first time in the project cafe. A gallon of beef soup for 50 cents served with a liter of Coke. Once done there, we decided to head out to the suburbs and check out the housing, which was coming along. This shot of the street lamps was worth a stop and a picture though. Three chained cherubs marching in a circle around the lamp. Who designs things like this? Who orders them? Can you actually imagine calling the industrial lighting supply place and saying “Hey Jian, send me over four of those chained naked baby street lamps, will you?”

Post work, another group dinner, this time at The Olive Garden. Now, before you all start accusing me of refusing to go native, let me just say that this is not the Olive Garden you’re thinking of. This is the Dalian Olive Garden. I took a picture as proof of its existence. 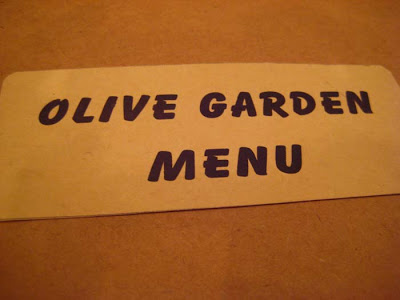 The food was really quite good as was the service. I had spaghetti with white sauce, mushrooms and prosciutto and it was as well prepared and tasty as any as I have ever had, even though they neglected to include the promised peas. The place itself was neat, a few small tables, a great staff and background music that included a techno version of Aram Khachaturian’s “Saber Dance.”

After dinner and still feeling the need to do something, we dropped down into the hotel bar/disco to see if we could muster the willpower to smoke a couple hundred cigarettes second hand while having a nightcap. It was dead and the young women hovering at the door seemed very sad so we decided instead to brave the now lower temperatures and blasting wind to work our way around the block to The Tin Whistle, Dalian’s only Irish pub and a favorite place of mine from a past visit.

Our base, The Shangri La Hotel is down hard on the waterfront of the city and so is (on its backside) surrounded by bars, very few of which merit a visit. It’s sort of a shabby location and it stands in stark contrast to the hotel itself which is very fancy and studded with luxe boutiques.

Walking down the row, girls in fancy outfits would stick their heads out into the howling ice cold wind and ask us if we didn’t want to come in. At one point a clackity-clack noise made me think for a moment that one of them was chasing us. But we turned the corner and headed into the bar which was gratefully deserted. One of the young men working pulled out the stool for me and offered to take my coat, a gesture I refused having learned my lesson by nearly freezing to death yesterday.

He struck up a conversation with me about the weather, clearly wanting to try out his English which was pretty good if a bit labored. We talked about the correct way to stay “strong wind” and I offered my retort in Chinese. We went back and forth on the topic of the weather for a bit and he told me that my Chinese was quite good. Following tradition, I stated that was not that great to which he replied in the most measured tone, “Well sir, in my opinion, your Chinese is very good.”