I mentioned the pearl market in yesterday’s blog and since we were heading back there today, decided to include a couple of pictures.

Anna is the Purveyor of Fine Pearls to Intel. Matt found out about her from a businessman here at the Renaissance on a trip back in 2006. Since then, every person who has been over here on the project at one time or another has visited Anna. She knows most of us by name and always has a big grin when we come up the escalator. The pictures below are of some of the product in her stall and of the third floor in general where the pearl dealing is done. Although the shops are separate, it’s almost certainly some sort of cartel because she will hand off the task of stringing and tying on the clasps while she is taking other orders. The market is located in a big building on the edge of the Old City and the Yu Gardens tourist shopping district. The first floor is engagement rings, the second, gold and jade artworks and the third, pearls.

While my companions were shopping jewelry, I went down the stairs to the gold floor to look at the statues and got into a great conversation in Chinese with the two girls in the shot below. I was looking at an extravagant statue of a horse, down in gold filigree and told them how we have 5 horse, 3 big (hen da) and 2 little (hen xiao). They found the story and my language very amusing. I took their picture standing in front of their shop.

From the pearl market we took sort of a big spin around the city, across the Bund, up Nanjing Lu, under the river to the center of Pudong to take some pictures of the skyscrapers and then back down on the subway to a little art street called Taikang Lu. It’s a former tenement block converted into trendy, chic little shops and cafes. One could spend a day in there wandering through the warren bobbing in and out of boutiques and galleries. We did have one cool moment on the Bund, when a family asked if they could take our picture with them. It’s not uncommon for Chinese to make this request, although with the number of westerners one sees around, I guess I am surprised at the novelty. I decided to turn the table and ask for the same thing in reverse. Here’s that shot.

We ended the day once again at the Face Bar, this time for Indian instead of Thai. Hazara is the name of the restaurant and the food is sublime. Unfortunately, we sat in the no-smoking section which is located on sort of a glassed in porch, with no heat. They rolled a small space heater under our table which promptly kicked off the minute we needed it. The dinner though was fine – butter chicken, Kasmiri rice and saffron nan. I wrapped my dinner up with a piece of Mango Cheesecake. Aside from freezing, it was a great time. 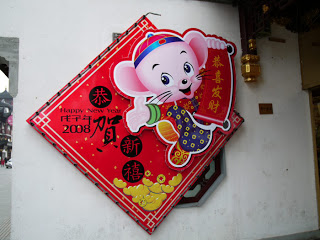