Our primary objective for the day was The Rock of Cashel, a medieval fortress located outside Tipperary. It is said to be one of the best sites in all of Europe due to the condition and the various styles of buildings. It was originally the fortress of the Kings of Munster and it is rumored that the last pagan king was converted to Christianity on the site in the 5th century, by St. Patrick himself. The buildings range in age from the 11th through the 18th centuries when it was abandoned because the current Bishop felt the site was too cold for his liking. He moved down the hill and into town, building another church and a palace that is now the Cashel Hotel.

Driving into town, you round a corner and there it is up on this formidable hill, overlooking a broad valley. It’s immediately plain why it was built there – it is protected in all directions. So protected that as always, while we could see it, we couldn’t necessarily get to it.

We went in on the main road and tried to find our way there by dumb luck. We ended up doing a series of left turns that forced us into a circle around the base of the hill. Thinking we’d found the way in, we turned into what turned out to be a little cul de sac neighborhood where we got to wave at Mom in her pajamas as she sent Daughter off to work. The Irish are very friendly.

Coming back around for the second pass we dropped the car in a car park and decided the easiest approach was on foot, just like the itinerant pilgrims used to do. Availing ourselves of a friendly woman in the local Tourism Office, we gained directions and walked up the hill through some tidy little neighborhoods and passed the Bishop’s second church. The fortress loomed above while blindingly green meadows, naturalized with daffodils spread out below. Off to the west stood the ruins of Hore Abbey, our next destination.

Five Euros got us in the door and we spent a couple of hours wandering around the grounds, wandering in and out of a slow moving guided tour. As we did, our sunny weather slowly deteriorated, going gray, cold and windy. 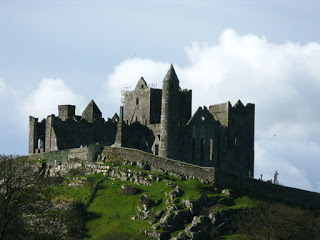 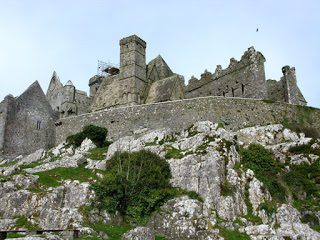 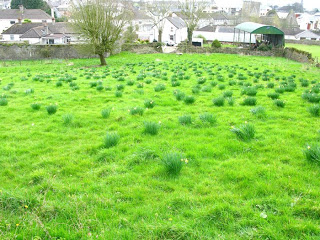 The most significant structure on the site is the Cormac’s Chapel, built around 1100 AD. It’s sandstone as opposed to the more common limestone indicating that it was hauled into place in pieces from a distance of about 90 miles away. It’s on of the finest examples of this style of architecture due to the detail work and the carvings, unique in Ireland and more commonly found on mainland Europe. It is said that a wealthy Archbishop from Germany sent his personal carpenters to oversee the construction, which explains it’s uniqueness in these parts. It is quite amazing from the strange hippo carved over the door to the finely wrought Celtic tomb inside. Interestingly it was founded by one Cormac McCarthy. 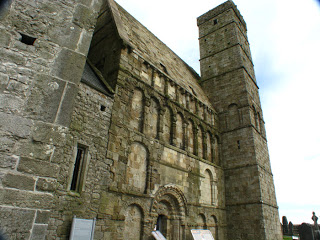 These shots show some of the interesting elements of the site. The graveyard had headstones spanning from the mid 1600s to the present and the view of the green expanse of the Golden Vale from the hill was spectacular. The big rock below shows what happens with the corner of a castle falls off – it makes a dent in the ground and lies there, just as it fell. In this case, the parapet was blown off in a wind storm in the early 1900s. The cathedral has seen restoration limited to stabilization, and lots of the beautiful parts are still intact, soaring to the heavens just as they did when built in the 13th century. The round tower is one of the best in Ireland and is built in the “dry stone” style, which is to say with shaped rocks and no mortar. The entrance is about 12 feet above the ground, allowing the monks to remain safely ensconced until the Vikings got bored and wandered off to pillage something else. 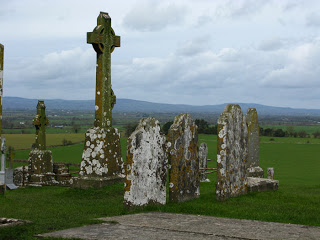 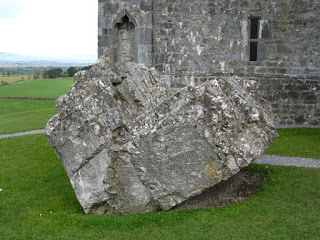 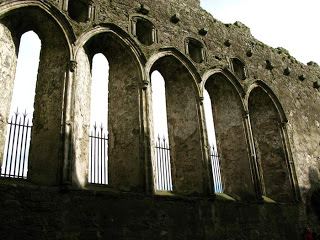 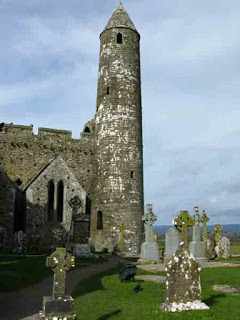 Having made one pass through the main cathedral, I went back around to see if I could get some additional detail shots of the architectural elements. Right before my eyes, and having been missed on the first pass were all these small crypts tucked into niches off the main halls. I took some time with each of them and I’ve included two shots below to show some of the incredible carvings on the sides of the tombs. They ranged from religious imagery to traditional Celtic designs. Mostly from the early 16th century. 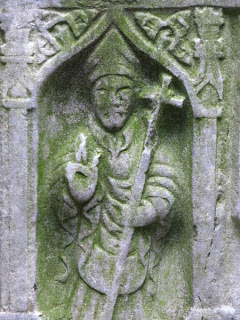 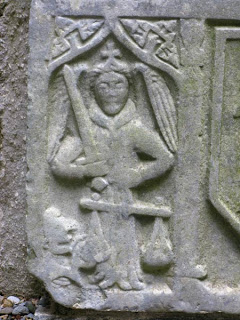 One last cool thing about Cashel – the place was loaded with Jackdaws. They are a corvid that more or less fills the same niche as our Crow. They’re a bit more petite and are more of a blue-black with a lot of gray on the nape. They have a very interesting call, which they use frequently. Every nook and cranny had a bird or pair of birds claiming it for nesting. About every five minutes or so they would all burst out of their cubbies and wheel around the cathedral, returning whenever they were comfortable that whatever they were afraid of had passed. 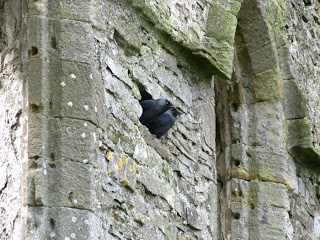 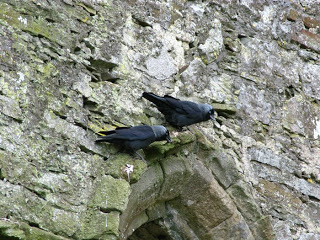