I left the hotel about 6AM, heading across Ya’an Xi Lu for my daily stroll through the park. Rounding the corner, I spotted Andy sneaking over there too, so I whistled and he waited. We headed down the road together.

It was pretty much the same as ever, and this being Andy’s first trip he offered the comment that if we didn’t know any better, you might think you were on the grounds of a “home”, what with the people singing, and yelling, and patting the trees and walking backwards. To that panorama today we added a woman in a black bathing suit doing the hula hoop, her arms extended over her head and her hips circling like a giant Kewpie bobble doll.

I took him down the regular paths past the people swinging the chains around Sky Pool with their feet and past the guy singing who today was on a different bench. Once again I passed the man in the black slippers who likes to climb the stairs by walking on the very edge of each one. Perhaps the point massages the arches of his feet?

We went along the main past to the realm of the Bird Men and my friend, again decked in white from head to toe was there once again engaged with his companions in conversation. I hoped he would look up so that I could nod, but he was busy and so we went on for another pass around the loop.

On the second circuit my acquaintance was standing on the path with some other men and so I seized the moment and got his attention and greeted him with “good morning” in Chinese. There was a flicker of recognition so I asked him where his birds were and this brought on his classic smile.

He took me from cage to cage and pointed to each and then pulled a piece of wax paper from his pocket and unfolded it. Inside was what appeared to be slices of dried fruit and he offered one to both of us. Being polite guests, we accepted although neither of us was sure it was for us to eat or an offering for the bird we were admiring. When he finally popped a piece in his mouth we did the same. It turned out to be some sort of dried, sweetened ginger and the flavor was quite unlike anything I had had before.

He said something to me in Chinese, which is the problem you always get when you initiate a conversation, people suddenly think you can speak it. I looked perplexed until one of the other men said “he cha” and then I got it, he was offering us a cup of tea. By now his friends were pretty much roaring with laughter at us, our Chinese and probably our invasion of their daily routine. Her poured each of us a tiny cup. One of the men pulled a flask out his pocket and made a joke about spiking our tea. Some things don’t require a mastery of the language to be understood. I laughed and waved him off and this cracked everyone up.

Apparently we’d been given the bottomless cup of tea because he kept filling and refilling it every time it got low. It was spicy for some reason and I commented so he opened the lid and showed me the contents – a mass of what were either red chiles or some sort of red bean formed the main ingredient. It was so hot that I was pretty much in a body flush and Andy had sweat running down his forehead. I finally managed to put my glass down and offered to take some pictures. More roaring laughter when one of his friends adjusted his cowboy hat to a more rakish angle. For his portrait, he picked up the tea pot and a cup and posed, as you can see below. All the men moved off to the back to form an audience and laughed even more when we took pictures with each of us.

I remember this first encounter with this fellow and how really special it was for me. Today though trumped it unquestionably. Not much language passed between us, but it didn’t matter – the welcome was warm and transcendent of anything that could have been or needed to be said. For all we know, the men might have been saying the most humiliating things. But I doubt it. The atmosphere was just so positive and friendly, that it can only have been as wonderful for them as it was for us. 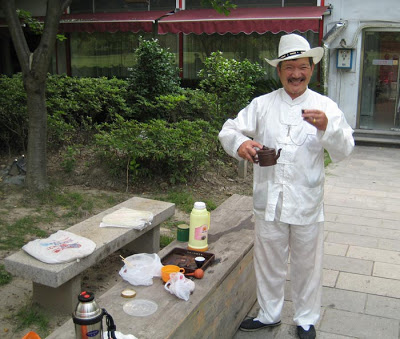