It seems like the only thing I ever talk about is food and that may be true, but aside from sightseeing, food is the one thing about the places I visit that is not only unique and sometimes downright odd, but also the unifying force between my culture and the one I happen to be invading. It is also the common denominator and language with whomever happens to be my local host and is a means to convey my appreciation for their hospitality through my appreciation of their cuisine.

Often my local friends will try to outthink me and take me to a place that they think is more appropriate for a western visitor. Just as often I would like to go out for a plate of jellyfish, preferring instead to go native in some small way. But as it turns out, the local attempts at western fare are far, far more interesting. Tonight was no exception.

After another day of tedious meetings and a brief walk around town we went out in our three cabs to Rosso Antico, the premier Italian restaurant in Ise. Before expanding on that, I’d like to share my thoughts on the cab and their drivers here in Japan.

In Shanghai, the cabbies are working men, generally young and they drive like banshees. You’ve heard enough stories from me to know that every trip by cab is a brush with instant death – these guys are nuts and if you were driving with a friend in the west who did the things they do, you’d ask to be let out of the car. But over there it’s just part of the experience and so you put your safety in the hands of a guy that thinks nothing about taking the short cut around a left turn by driving down the sidewalk.

The cabs themselves offer the same spirit, They’re beat up, worn out gritty little Volkswagens that would think nothing of going toe to toe with a Ferrari in a bar fight. They’ve made their bones in the worst traffic in the world cruising the ring roads at high speed dodging bright blue lorries and car swallowing gaps in the pavement.

In Japan the cabs are driven by grandfathers. I verified this with our Tokyo host lest I be misinterpreting the societal status of the distinguished silver haired gentlemen who occupy the right hand space behind the steering wheel. They are polite, calm and drive with an austere seriousness that would make any driving instructor in the world blush with pride. They maintain their lane and use their turn signal at every corner. A drive to work is a Zen experience in precision and smoothness. And they talk to each other with measured politeness on little CB radios

The cars are fancy little Toyotas that look like a Bentley whose original drawings were put in a copier and shrunk by 50%. The seats, both front and back, have lace doilies on the top surfaces and the headrests. There are ample “no smoking” signs and you are encouraged to fasten your safety belt. In short, you couldn’t have two more different cab cultures if you sat down and designed them.

Back to the food.

The restaurant looked just like every other Italian place in any old city in the world. We took our places at a big table in a private room and got down to ordering. The menus were in Japanese so we left it to our host Morita-san to decide what we wanted.

The first course was a couple of pizzas, one Margherita and one “Chef’s Special” which was a “white” pizza topped with potato chips. Next up was a traditional red spaghetti dish which I passed on, opting instead for an olive oil and cheese pasta dish topped with local mushrooms that was excellent. Moving along we had a couple more pizzas and another seafood pasta dish with curly German egg noodles, loaded with calamari and scallops. Again a hit. I was sitting next to one of the Japanese engineers and he was rattling off the dishes in Italian and I came back in Spanish, allowing for a bit more trans-national culinary détente. Slices of grilled pork loin we up next, perched on a pile of french fries coated in oregano. Probably the best batch of fries I’ve ever had from a taste and consistency viewpoint. We were cruising now and moving to the East moving on to a very good dish with a red sauce loaded with fish roe, this one being the Japanese specialty. One last pesto and calamari plate left me topped off once and for all and really wondering how I was going to hold up my end of the desert bargain when the Tiramasu showed up accompanied by apple sorbet (which was really frozen applesauce) and a fig presented in a brandy sauce. Dinner was over, and I was stuffed to the gills.

The evening was quite remarkable not only for the food but for the hospitality of our Japanese hosts. We talked in English, we talked in Chinese. We did a little Japanese, Italian, German and Spanish. We ate classical interpretations of common foods and their analogue partners created with a local aesthetic. It was breezy, boozy and fun all the way around, one of those great nights out that end up wonderful despite your initial expectation that it is going to be a drag. And the food was good too.

I’ve had a couple of opportunities to wander around and to snap a few shots of the local sights. More of this will come as we head into the weekend, but for now here are some of my early impressions, a shot out the window, an interesting local car (of which there are very many), some local architecture, my hotel and the little plastic fellows you find outside businesses. 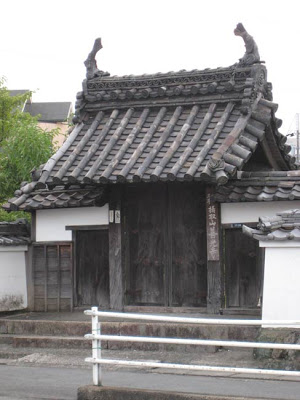 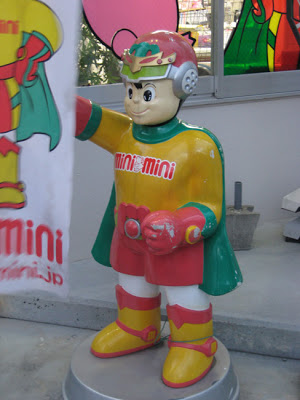