The remainder of my trip was classically United Airlines. It’s funny, I had three good legs in a row this week, and I rewarded them by filling out positive surveys on line. But this one managed to wash it all away, having ended up 1 hour late on a 50 minute flight. Yes, I know I am a picky traveler, but sometimes I wish they would come into the gate area and announce, “Is there an efficiency expert in the lounge?”

I left my breakfast spot and headed down to the gate, discovering along the way that it had been changed. No big deal, I just walked on. Arriving there I saw all the appropriate Albuquerque information up on on the board, as expected as we were about 20 minutes prior to the planned boarding time. But something wasn’t right, the gate agents were agitated and using a “tone” with people coming up to the podium with questions. In a moment it became clear – they were planning to load a plane to San Jose from this gate, despite nothing posted to that plan. They asked everyone not going to Albuquerque or San Jose to leave the gate area. No one did. They told everyone to stay away from the podium if they weren’t going to San Jose. People got up to check whether this was the correct gate for Albuquerque. In short it was Chinese Chaos, just like Dalian, only with the Rockies in the background.

Eventually they straightened it out and got the San Jose plane boarded. It sat there for a long time, finally prompting the agents to announce that the Albuquerque plane was officially delayed. Apparently the Californians had hijacked our plane and they needed to bring another one over from “the maintenance hanger.” Not words you want to hear.

Finally the Californians were on their way and our plane rolled up. Then came the next dreaded announcement, “They didn’t clean the plane while it was sitting in the hanger, so now we must wait for the cleaning crew.” Hmmm, I wonder who was supervising that little effort across the field in the maintenance hanger?

The crew showed up, they cleaned the plan and we boarded, about 35 minutes late against our original boarding time. Sadly, I had been bumped out of 1st class and no amount of eyelash batting would make the agent see things my way.

But being a “made flyer”, I got on the plane first and settled in. A couple came and made me get up but aside from that it was just a matter of sitting there are the throngs filed past.

I noticed a man carrying a mandolin case and wearing a t-shirt that said “I Love Corridas”, an interesting emotion I thought. With him was a woman, clearly Mexican fully decked out in embroidered fiesta wear and tall cowboy boots. As I was checking the two of them out I suddenly stopped breathing – she had clearly broken a bottle of perfume over her head before leaving the hotel. And unfortunately for me, the line of passengers placed her right next to me for what seemed like 30 minutes. I pinched my nostrils closed and hoped for the best, checking my pulse for signs of shock. She finally moved along. (As it turns out, I did a little detective work and discovered that she is a fairly famous Corrida performer on her way to a concert in Albuquerque, having completed one the night before in Boulder.)

With everyone seated and ready to go, the next announcement came. “Sorry folks, but the navigation module is not calibrating properly and we have to have a mechanic come over and check it out. And by the way, if we can’t fix it we’ll have to get another plane.” Hmmm, I wonder what they were fixing over there across the field in the maintenance hanger? He told us he’d get back to us at 12:33 and I began to calculate how long it would take me to rent a car and drive home.

At 12:23 the purser announced that we were on our way. You could tell from his voice that he was very proud that they’d beaten the 12:33 deadline. And I guess he should be since they had kept the delay to only 60 minutes.

The flight was uneventful, I read and the only interesting thing happened when the guy in my row decided to pour the last of his Sprite just as we hit our only ugly patch of turbulence. He missed the glass by a good 3 inches and instead filled up the surface of his wife’s tray table with the sticky liquid. For some reason she looked at my imploringly and I dutifully handed over the wad of Kleenex I had in my pocket, hoping to stem the rising tide of soda.

We landed, I drove home, and that was it.

I tried to load some photos of the Oregon coast after my short seacoast trip back on Wednesday. Unfortunately, Blogger was having one of its tantrums and the controls necessary to load them were non-functional. Now at home, Blogger is once again feeling cooperative and so here they are, late but still nice to look at. These were taken in and around Tillamook Bay.

And oh yes, I’m home for a whole week – next Sunday it’s off to Ireland for the 4th time this year. Check back in for some stories from the Emerald Isle. 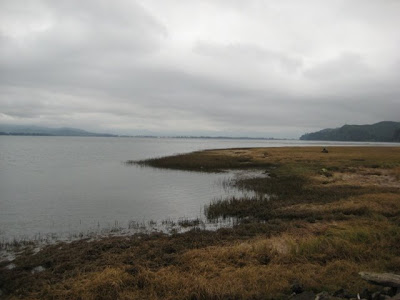 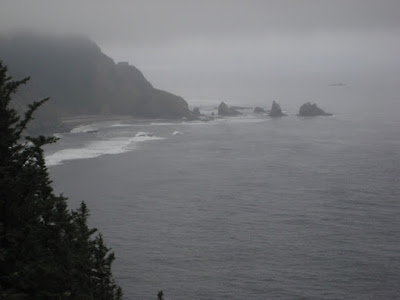 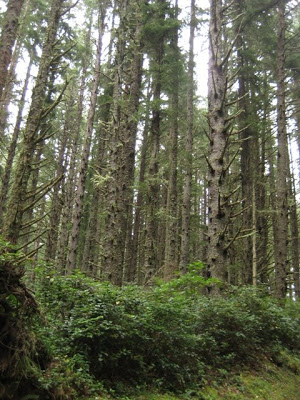