Today started with a neat little breakfast in the Barri Gotic, I had a warm bocadillo with cheese and pork loin, My Lovely Wife going a more traditional route with eggs, bacon and once again, french fries. We planned on covering the last district within easy walking distance of La Rambla, known as El Raval.

This area is quite different than the Barri despite being just a few blocks away. For one thing it’s far more ethnic with Russians, Africans, Indians, Chinese and Middle Easterners making up most of the signs on the stores and faces in the street. Complementing this mix are many youth hostels catering to dreadlocked hippie kids traveling on a shoestring. We stopped in one store to look at scarves and I got into a conversation with the young Chinese woman working the counter. She was pretty surprised when I spoke to her in Chinese and doubly surprised when I told her I lived in Dalian. It turned out that was where she lived prior to coming here. I’d say I was surprised, but these days encounters like this seem to be the norm for me.

One last tourist spot beckoned, the Monetiur de Sant Pau de Camp – Saint Paul of the Fields. This is Barcelona’s oldest church, built in the 9th century and renovated in the 11th. It was odd to find it across the street from a Persian shop by the name of “Bazar Rehab” offering large hookahs, emblematic I suppose of our ever flattening earth.

We continued up through the district, slowly climbing up the slopes of Mont Jiuc the small mountain overlooking the city. From the top the view was wonderful, one vista offering a close combination of La Sagrada Familia and the Tore Agbar set against some snowy peaks in the distant Pyrenees. We stopped in a small park set amid a grove of Eucalyptus trees and populated by dozens of feral cats, sunning themselves in the late morning light.

There is a host of cultural buildings atop the Mont but given the limited time we decided to concentrate on the Olympic park, here since the 1992 games. Olympic architecture is a little strange to my eye, especially the European version which tends to be a bit “fascist” looking for lack of a better word. Despite that, you could get a strong sense of the transcendent spirit of the games from these buildings and their grounds.

Barcelona thoughtfully provided escalators down from the top of the hill, a welcome respite from the slopes and the hills. We rode them down and walked past the Plaza Espania, the main square in the city. Behind it one of the citie’s major bull fighting stadia was undergoing its own renovation. We continued on through the pleasant Saint Antoni district finally arriving at La Rambla later in the afternoon with just enough time for a fresh fruit salad and $10 worth of milk chocolate macadamia bark from the Boqueria market. A nice end to a nice day.

Our last night’s dinner was had at a modern place across the street from our hotel called The Attic. I had duck and she had salmon and we topped those dishes off with a chocolate mousse and an interesting dessert made of a chunk of Belgian chocolate in the consistency of unhardened fudge sitting in a small pond of orange sauce.

Which brings us to now, time for bed and reflection. Spain is a wonderful country, and I can’t wait to find my way back here again to Barcelona. Girona gave me what was probably the best day of touring that I have ever had – it was so nice that I found I simply could not conjure the words to express just how strongly I felt about it. The whole trip, from food to Roman ruins was more than I had imagined when I fled “the greatest migration in human history” in favor of something warmer and more western. And the last minute addition of My Lovely Wife was the icing on the cake, an early 15th anniversary trip that neither of us had imagined.

All in all, quite a wonderful 4 days, payment enough I think for traveling half way around the world. 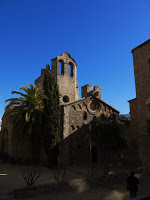 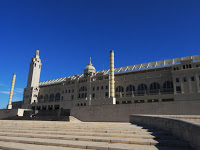