I drove to work this morning through a mini-ice-fog. We were heading down the boulevard that runs parallel to the light rail tracks and suddenly the visibility fell to about 10 yards. Looking out the window I could see that all of the bare branches on the bushes in the median of the street were covered in clear, fresh ice. And the pavement looked to be a bit shiny too. My driver slowed down mainly because a police car with its lights on came across two lanes and merged into the not quite adequate space between us and the van in front. We went along for a quarter mile or so as a threesome, the van leading, the cop and then us. When we reached the intersection where we normally turn left, the policeman swung right, cut off a couple of cars, shot left across the intersection, did a sharp left U turn back so that he was facing traffic, stopped and backed up until the rear of the car was tight against the median on the perpendicular street. He got and stood there, on post, putting the fear of Mao into the oncoming commuters. We turned left and having gained about 10 meters of elevation were suddenly free of the fog.

But tonight’s topic is not ice-fog, it’s fireworks and it comes on the heels of an interesting story that wasn’t quite reported in the news – the fire that engulfed the not quite finished Mandarin Oriental hotel yesterday in Beijing. It seems that the employees of CCTV, working next door to the construction site decided to have a little fireworks display and in doing so set the building on fire. For a variety of reasons it managed to burn to the ground while being completely ignored in the local media. The irony I gathered from the New York Times coverage was that the TV network started the conflagration and then failed to cover it. In any event a story such as this offers little surprise to me having lived through pseudo-wartime for the last month.

Monday afternoon I was sitting in my room writing the furniture shopping blog when the noise began. It was about 4 o’clock and it went on for a couple of hours before I finally broke down and decided to go outside and see just what the story was. I pulled on my jacket and shoes and went downstairs.

The first challenge was to decide where to go because there were rockets shooting up over the buildings and into the sky in all directions. I crossed Jin Ma Lu towards 5 Color Town and once over, they stopped. So I crossed back over by the Bank of China and they stopped too. You see, there is virtually no limit to the kinds of rockets and bombs you can buy here and most of what’s being set off is being done so by regular people out in front of their homes. The only difference is these things go 150 feet in the air. Nothing is organized; it’s simply all these little rogue shows that end by the time you get there. I turned around and was heading back to the warmth of the hotel when I saw that something far grander appeared to be happening down the street and around the block. I cut across the hotel parking lot and down a dark alley turning on my camera and setting it to “video” on the off chance I might catch something interesting.

Coming out of the alley I stopped to shoot a short film. A guy across the street from where I was standing started setting off his own little display with a set of cannons that shot fireballs 30 or 40 feet in the air each one exploding in a ball of white light and giving off a deafening sound made worse by the echo off the apartment buildings. I stopped filming and went on as the one up the street appeared to be a big deal. Car alarms were being set off on every vehicle I passed due to the concussions.

I decided to film and walk and you can see the result below. Getting past the end of the Da Shang building I could see where everything was coming from. People stood around me talking videos with their cell phones. The noise was incredible as were the lights. Now bear in mind this was no sanctioned event, just a couple of guys setting off whatever they had bought right in the street in front of a department store in the middle of the dinner time shoppers.

The show went on here for 10 or 15 minutes and then abruptly stopped. Everyone went on about their business and I turned the corner towards the main intersection which was interestingly jammed with people. Putting 2 and 2 together and judging from the section of street closed up ahead, it was clear that something official was about to happen out in front of the Kai Fa Qu government offices. But I was freezing having gone out on a lark with too few layers so I picked up my speed and went back to the hotel for another jacket, gloves and hat passing by yet another small group of pyromaniacs setting off rockets among the cars parked in front of the office buildings lining the street. I stopped here to take a short movie capturing the din of the car alarms. My supplementary layers retrieved I headed back down the street and claimed a spot on the sidewalk which by now held several thousand people.

Only the extension of Jin Ma Lu beyond the intersection was closed so the evening traffic tried to continue to flow. Buses, trucks and cars moved at a snail’s pace, blowing their horns incessantly as though that would make a whit of difference. But this is China, and car horns are an important part of the communications fabric.

An old woman stood next to me bundled up in a long coat and wearing a knit hat. She checked her watch, it was 7:10 and the show began.

They had lined the north side of the street with carton after carton of explosives which now started to shoot rockets, their tails a shock of yellow flame up into the air. All of the regular things we see on the 4th, – starbursts, screamers, white balls of fire. One burst sent out hundreds of tiny red parachutes each carrying a tiny diamond of white flame. In response to the show people in the audience were sending up a steady stream of tiny hot air balloons crafted from plastic shopping bags and a cross of burning wood. The air currents took them up and over the buildings, doing somersaults and still remaining aloft as they disappeared into the night. No doubt headed off to start a fire in a park somewhere.

The show went on non-stop for a good twenty minutes and then simply ended. No applause, no cheering, everyone just turned around and walked away back to their nightly business. Cars that had pulled up into the lots were now driving down the sidewalk parting the crowds by blowing their horns. Yes, that’s what I said, cars blowing their horns to get the pedestrians on the sidewalk to get out of their way.

The celebrations went on until well beyond 2 AM, which was the last explosion I happened to hear while trying to sleep. I asked around work what the story was and it turns out that Monday night was the 15th day or the New Year and the night of the Lantern Festival. (The modern response to the tradition of lanterns was met with the floating shopping bags drifting up and over the crowd.) Traditionally the final night of the Spring Festival celebration after which fireworks are by permit only (a bit of a joke considering the noise I hear out the window while writing this.)

Yuanxiaojie is the name for the day and it’s at night when Tangyuan is eaten in celebration. A rice ball stuffed with red bean paste, nuts and rose paste is boiled in water and served with sugar syrup.

I’ve attached a few representative videos below to give you a tiny impression of what this particular evening was like.

Just outside the alley, looking down the street behind my hotel.

Up the street from the alley, where it was all happening. Sorry for the wobbly camera work, I don’t have a Steadi-Cam.

The car alarm sequence, shot next door to my hotel. Those bursts are being set off by a couple of guys hanging around by the parked cars. Gives you an idea of just how big an explosion you can buy here.

The officially sanctioned show in front of the government offices.

The morning after trash pile. 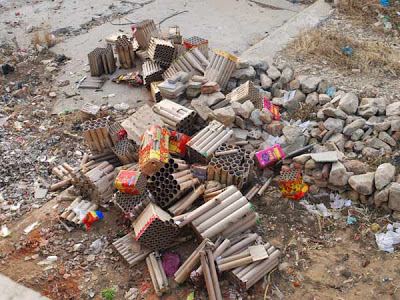