There is a wall containing a construction site just up the block from my house. It’s covered with banners that change from time to time, listing the events at the Dalian Development Theatre which happens to lie a bit further up Jinma Lu. Funny building, it’s designed to look like an accordion fan and it stands out against the sky at a point where the road curves off to the right giving you the impression that a giant Geisha has stuck her fan in the earth and walked away.

While the writing is in Chinese and without any English translation I can usually guess what’s on the program. Sometimes there are cartoon characters that advertise a musical aimed at families. Or there might be a Chinese couple drenched in rain depicting some sort of melodrama. But mostly the banners advertise classical music ensembles using those doubly twee photos of the members of a troupe staring longingly into each other’s eyes, autumn foliage in the background. Or maybe a trio posing in an elevator in some Berlin concrete and steel Bauhaus office building looking up the elevator shaft at the photographer who was rappelling down the outside of the building. One time last spring Mozart himself stared down on the people using the wall to get out of the sunshine as they walked down the street.

The shows run on roughly a monthly basis and I’ve been hoping to go to one on the bet that the music would be good and the cultural experience would be outstanding. But I’ve always been out of town or doing something else and so they’ve come and gone and I’ve missed them each time. This week though my friend Kris had been talking about buying tickets for her family in hopes that exposure to some music would whet the musical appetite of her youngster, aiming her in the direction of selecting an instrument. Ever the opportunist, I invited myself along. Tickets were the equivalent of $15 and judging from the available seating that price was not terribly popular with the local classical music aficionados. At the time of the purchase, there was a debate with the ticket agent as to whether twenty tickets had been sold or if twenty were left.

Being stinking hot here, deciding on what to wear was a challenge but I settled on a nice lightweight pair of slacks, a black tee and black sports coat. In short I looked pretty nice stepping out of the Honda and onto the curb. Of course the stifling heat instantly made me rethink my choices but sometimes sartorial panache simply has to take precedence. We were early so we walked up to the entrance area and waited for the doors to open, spending the last few moments watch some men rollerblading in short track skating style in a tight draft, arms folded behind their backs.

Judging from the crowd the answer to the ticket question was definitely trending in the “twenty sold” direction. In terms of attire I had clearly overdone it as most of the men were wearing shorts and polyester golf shirts; thankfully there not many of them. A man carrying a big plastic bag full of fruit approached one of the guards as the doors were opened and a small “discussion” followed. Apparently he and his family had planned on a picnic in the theatre and he was not happy that the guard was not letting him in with his victuals. A compromise was reached and the fruit was placed in one of the lockers off to one side of the lobby. I’m not sure I’ve ever been in a theatre with gym lockers available, perhaps picnics are often planned here and scotched at the last moment.

The lobby was classically modern, much like every big music venue I’ve visited. Lots of wood, a giant modern sculpture hanging on the wall depicting the Triumph of the Arts over mediocrity and the indomitable nature of the human spirit. The floors made me wonder if I could remain upright if they were wet. The ushers were uniformed security guards; it seems that they take their seat assignments seriously here. We showed out tickets to one and he motioned us down the stairs.

The theatre was quite spacious and beautiful – red velvet chairs, thick carpets and medium-brown wood paneling. And pretty large, I would guess seating around one thousand. The air though smelled slightly of wet climate basement as though the windows should have been opened once in a while.

There would be no need to head to the door before the encore tonight as there couldn’t have been more than fifty entering with us. We found our row and were pleased to discover that our seats were dead center of the room at precisely eye level with the pianist. They couldn’t have been better which was surprising considering that we had purchased them just 3 days before the show. Other people were dotted here and there except for the back row of the lower section which was almost full from end to end. Cheap seats or perhaps a vantage point that people like? The crowd was almost entirely Chinese with the exception of a handful of Germans who came in and sat directly behind us. And more or less older couples with college aged children. A young man sitting in front of us sat watching “American Idol” on his cell phone. A few more people wandered in as we waited.

Fifteen minutes before the show the curtain call was played – a tape recording of Big Ben that sounded as though it was warning of midnight and the impending release of the vampires. It was eerie. But the lights went down and a young Chinese woman wearing a black cocktail dress and white stiletto heels came clattering out to introduce the program. She spoke very fast and very loud and I got none of it. A few seconds later, the musicians came out.

Eva Steinschaden and Alexander Vavtar were the night’s performers. Known collectively as “Nota Bene”, they specialize in Mozart and 20th century composers. I’m always glad to see the former on the playlist and scared to death of the latter. But after a staccato introduction by the emcee girl they settled into a nice rendition of Haydn’s Sonata Nr. IV, A major for violin and piano which set the tone for me. A small ruckus a few rows ahead of us broke out when a disgusted wife smacked her snoring husband while a Chinese family behind me took turns with giant nautical binoculars even though they were no more than 20 feet from the stage. Apparently they wanted to see the individual strings on the violin. Surprisingly the crowd knew when and when not to clap, something I was glad of since my heart went out to the musicians – the sheer loneliness of the sound of 75 or so people clapping in such an expanse was very sad, no doubt making them wonder why they had scheduled a date in such a Godforsaken place. But the musicians put on a game face and gratefully accepted the appreciation of the audience. They followed Haydn with a series of unmemorable pieces (well performed but not terribly to my liking) by Fritz Kreisler, Pärt, Stockhausen and others whose music is thankfully unknown to me. Single movement little ditties I assume included for the purpose of showing off their skill. Each piece was introduced by the young woman who rushed out, delivered her speech from index cards and rapidly disappeared, stage left.

Not being able to understand the emcee and additionally being unable to read the program made following the order a bit difficult but it didn’t matter as I wasn’t about to run out and download anything I’d heard after the Haydn piece. We were trying to understand the order when the music stopped and they left the stage after perhaps 45 minutes, apparently for an intermission. The program was confusing at this point; there was a break in the listing of the pieces that had a “15” in the middle of some Chinese characters and I assumed it meant the first half of the program was for the 14th of August and the second for the 15th. But a careful matching of the characters on the sheet with those displayed on the giant red LED screens on either side of the stage seemed to suggest a break. Our detective work was proved valid when the “15” started counting down in one minute intervals until “5” was displayed and Big Ben again sounded. My friend Matt returned from a trip to the rest rooms with a report of being corralled by one of the usher-guards when he was caught viewing a game of badminton on the courts that he discovered underneath the theatre. They make use of every square inch of space over here.

The musicians returned and launched into Satie’s Gymnopédies the one piece by that composer that we all know and hate. After a string of little numbers they closed with another Haydn piece, his Sonata Nr. VI, C major for violin and piano and it was wonderful. At the end, two little girls who had been waiting in the wings hustled on stage and handed bouquets of red roses each of the performers who were feigning mighty surprise. The musicians left and the audience, such as it was, continued to applaud.

Now it’s hard to encourage an encore with so few people but the players returned and gave us another tune, short and sweet. At the completion, they left and were not seen again.

On the way out there was a table set up with CDs for sale and I bought one simply because I felt so sorry for them, coming all this way and performing for such a tiny turnout. I wonder if this is the life of the second tier of classical musicians who make these grand tours. Nice venues in big cities around the world, playing for a handful of appreciative viewers.

As evenings go here in Kai Fa Qu, this one was pretty nice. An unexpected opportunity to dress up and immerse ourselves in our culture for a change, even if we were still strangers in this odd land. I was very grateful for this chance and I will certainly avail myself of the opportunity again, watching the sign at the construction site for the next interesting offering.

We left and walked across the plaza past a crowd watching some senior citizens playing traditional Chinese instruments and singing what must have been classical Chinese songs. It was an interesting case of juxtaposition, the polished western music we’d just enjoyed versus this more traditional, simple and earthy fare. Inside it was 18th century Vienna, outside an evening in the rural China of the 1950’s on a collective farm where the workers entertained each other with their individual talents nightly after a long day’s labor. For some reason just about everyone in the back rows of the gathering turned their attention from their performance to us and stared as we walked by. I’m used to being looked at here but this was strange by any standard and I’m not sure what it meant. It was dark and hot and we simply turned away and walked on, wondering why this night we were such a special sight. 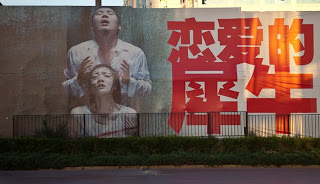 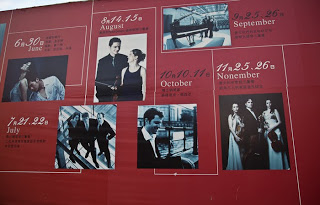 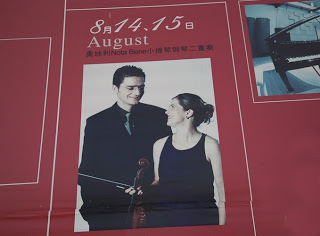 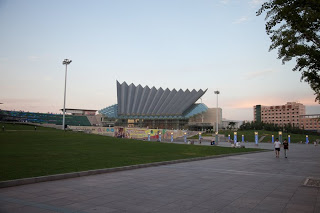 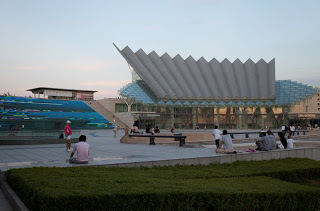 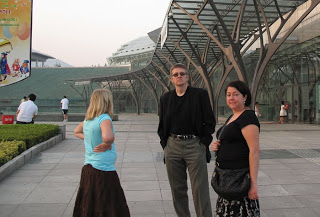 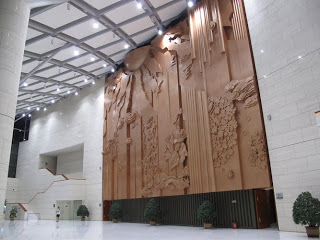 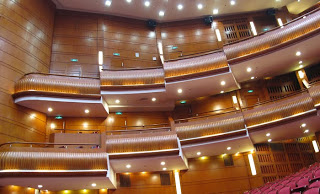 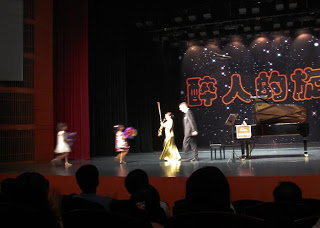 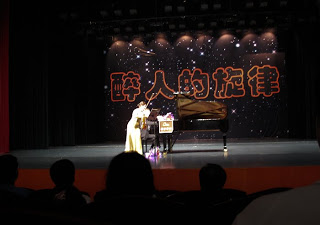 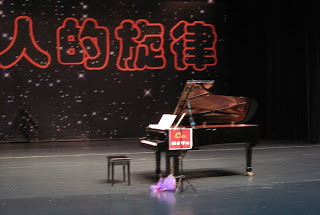