We spent our one day in Dublin doing the tourist things – Trinity College, Book of Kells, St. Patrick’s and Christchurch Cathedrals. Walking in and out of the occasional rain shower, admiring the architecture and people watching, it was an enjoyable day just wandering around the old part of the city. I had the distinct experience of finding myself among the dumbest bunch of tourists ever at Trinity, people who simply stopped moving as through controlled by a remote control signal from afar. While tourists are not generally an intelligent lot, this pack seemed to be singularly impaired in the common sense department, as it happened over and over again. The Long Room in the Old Library was something to behold, evoking all the thousands of great minds that had spent time studying in the musty stacks. We sat for a bit and just looked around before heading back out. After a few hours of trekking we stopped at a small shop for a pair of milk shakes which set us back 10 Euros. They were tasty, but highlighted once again just how absurdly expensive this place can be.

For dinner that evening we went to an Italian restaurant I’d visited on a previous trip. The food was excellent but once again it was the personal connection that made the evening memorable. We had a nice chat, once again in Spanish, with the Galician waiter who filled us in on why so many people come to Dublin to work in service jobs; the answer was simple- wages and plenty of work. My tally of recently new acquaintances now stretches from a girl met on a cable car in Liaoning province who works in a Chinese laundry in Shannon to a Brazilian waitress who sells Spanish tapas in Dublin to a Spanish waiter who serves Italian in the same place.

Saturday we checked out to begin our circuit of the country. After discussing our route out of town with the Latvian doorman I decided that it pretty much followed the way I knew from my drives out to work. After a traditional Irish breakfast of egg, toast, sausage, bacon, black pudding and one other thing of indeterminate provenance, we got on the road and in the first mile followed my second Irish tradition of missing my turn at the Grand Canal, heading across into the embassy district, getting turned around on some nutty side street and finally finding my way back to the correct direction. This time though I expanded the mistake by going back across the canal, turning onto the far side, driving parallel until Upper Leeson Street, going t back across a third time and making a quick u-turn not far from the Burlington Hotel where this grand case of driving errors first took form so many years ago. I guess it’s a testament to my improving skill that this time I didn’t hit any curves nor did I have to stop to catch my breath and use my Nüvi to figure the whole mess out.

I was back on home turf now heading out of Dublin to the west and our next stop, The Irish National Stud. It’s great driving familiar roads, it just lowers the stress level by so much. We did take a slightly different route in the end – the M50 construction that I had dealt with on so many previous visits was taking its final form and so my path was considerably more straightforward than it would have been on earlier trips. Eventually we passed the last of the city and motored on through the green fields and hedgerows you expect from this place watching as the weather started to close in.

The Irish National Stud is Ireland’s primary breeding facility for Thoroughbred horses producing horses for both traditional racing as well as Steeplechase, countless champions successful here and in the US have been produced by this farm. It turned out to be quite a pleasant place for a stroll under threatening skies. This year’s crop of foals were spending the morning fattening up on the apparently endless of green grass while their dams kept a watchful eye. We wandered on a loop around the facility enjoying the cool weather, the trees and the fields. Their Museum of the Horse was simple but informative and their small collection of Falabella miniature horses made us think about our little friends back home. The stallion facility had separate boxes for each of their studs with brass nameplates listing their wins and winnings. Each stable had a big skylight in recognition that a horse’s health and productivity is governed by the Moon and the stars. Off to one side of the property we found the Black Abbey, a ruin of a 12th century monastery. Before leaving we wandered through the adjacent Japanese Garden including the pitch-black and appropriately named “Tunnel of Ignorance” which brought to mind many of the things going on in my other life.

Back on the road we decided to bypass some of our original objectives in favor of heading straight to the Dingle Peninsula. Along the way we stopped in the village of Adare for an easy lunch in a local pub, listening as the men in the back room whooped and hollered at each goal made by whatever team they were watching. Before leaving town we took a moment to book a hotel based on the recommendation of our guidebook figuring that since it was the tail end of the high season and a Saturday night, a bit of insurance was probably worthwhile and sure enough the first place we called was full but the second was open. Room in hand we headed for the coast.

From the map it never looks as though you have far to go in Ireland but the nature of the roads makes the going slow. We drove through many towns with familiar names – Limerick, Tralee – before closing in on the coast. Off to one we could see the far off Ring of Kerry, lying in the building mist. It was getting a bit dusky now, not due to the time of day but rather the building clouds and the drive was a bit of a challenge as rain began to fall. We finally reached Dingle town and started to look for our hotel, going through town twice and getting turned around a couple of times including staring down a one-way street at the top of a steep hill that resulted in multiple stalled car episodes before managing to exit on a downhill side street. Ultimately we had to make a call to the hotel to get a second set of directions, seemingly unneeded in a town with only two streets but as it turned out, we never would have found the place without them. The owner said she would stand out front to wave at us as we went by and sure enough, she was there along with several other members of her family. After fifteen or twenty maneuvers to get my 6’ car through the 6’2” wide gate to the car park, we were landed.

I’m not going to name the place we stayed because it’s not fair to run someone’s business down when I’m sure it’s just fine for regular people who are not accustomed of late to staying in 5 star international establishments. But I will take the time to describe it and I will say that I will never again travel anywhere without a long list of vetted hotels, especially when I plan to travel each day without something booked in advance. It’s not that it was dirty or unsafe, it’s just that for 100 Euros a night one might expect “something”, especially when the place I stayed last Saturday night in one of the world’s major cities cost about $50 less, given the exchange rate.

It was obviously an older place and recently renovated to “standards that make it equivalent to all finer hotels”, at least in the somewhat apologetic explanation offered in the hand-typed “visitors guide” provided in the room. You entered through a pub, did a three-way jog through the dining room and ended up in a small hallway off the back of the building, two rooms to a side and one at the end. The room numbers were off course those little metal ones you buy at Home Depot for your front yard gate, assuming you can’t afford the ceramic tile version. A real-live skeleton key opened the door and was necessary to lock it from the inside. The room itself was on the small side, something you might expect at the family cabin and in this spirit, the furniture was knotty pine just like the first set you buy for junior once he is out of his crib and ready to live like one of the Hardy Boys. The 13” television was mounted high up in the far corner on a hospital room bracket. The mounting didn’t amaze me, but I was pretty surprised to discover that they even make small televisions like that in this day and age. A tall but abnormally skinny armoire stood in one corner, half obscuring a tiny print on the wall no doubt pulled out to allow access to the electrical socket behind it. The double bed didn’t quite fit in the niche in the wall which meant I had to crawl over the top of it to throw my legs down on my side. There was a tiny light fixture hanging in the center of the room and two small lamps that gave the impression that you simply threw them out rather than changing the bulb, should they cease to work. The mattress was something else, sort of evoking a camp cot made softer with the densest possible cotton batting. And the bed cover was simply a slightly more flexible version of the mattress. The pillows followed suit. The bathroom occupied what must have once been a closest and its crowning aspect was the faucet – separate spouts for hot and cold that gave you a damned if you do choice when it came to washing your face or hands. The shower was simply old. Amazingly though, for all its rustic nature the place offered free wireless access. I have to say though I would have gladly traded that feature for having my sink water mixed before dispensing.

After being turned away at our restaurant of choice (no reservations) we ended up at a local place where we had an excellent seafood dinner, salmon for My Lovely Wife and a kind of scallop that was new to me. The place reminded us of a dinner long ago in Mendocino, small and quaint with interesting food. Here though lots of locals mixed with the tourists and it made it more interesting to try and figure out who was who.

Back at the hotel after a nice evening stroll up and down the Hills of Dingle, trying to sleep tha brought out the secondary feature of our lodging – tissue paper walls that meant every sound by every other guest was yours to share. We laid back and waited for the night to end, awakening to the sound of pouring rain.
Breakfast was included and good but came up short of providing total redemption; I paid my 100 and packed up the car heading off to explore the peninsula. Dingle was a funny place, a mix of rampant tourism with Irish charm, capitalism and folksiness. A place where the conversion to Gaelic makes it seem as though you’re in a different country, yet you’re not. I liked it and I didn’t but I was so looking forward to the other things the region had to offer that I put the knotty pine behind us and went headed out into the rain. 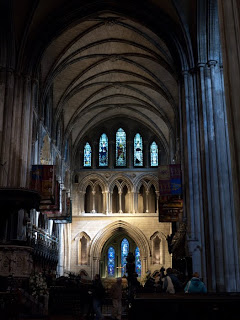