I returned to my apartment after flying half way around the world and walked into an ice box. Well, that’s a slight exaggeration but it was 17 degrees C and in our western nomenclature that spells C-O-L-D especially when you’re tired, frazzled and 15 hours out of sync. Although some might consider 62 degrees to be just about right, I suppose it is if you’re sitting outside in the sun.

Part of the problem was that I had left the air conditioners running which although now pumping outside air had certainly contributed to the super-cooling that had occurred over the previous two weeks. Capping the enjoyment of my arrival was the fact that the place smelled like a combination of dirty babies and a fish fry. Imagine a diaper pail next to the deep fryers in the kitchen of a seaside restaurant in the Florida summer time and you get the idea. It wasn’t pleasant but it wasn’t enough to make me throw up on the spot.

Now my apartment has no indication of any kind of central heating and we know it doesn’t have central air because I have 4 units scattered around the house. The wall systems in the bedrooms and my study are small, and reportedly scared of the refrigerator sized monster I have in the dining room. After bundling up and getting a bite to eat I decided to tackle the monster figuring anything that big can’t be simply an air conditioner. So I got the remote control and punched some buttons but nothing really changed and honestly, having just spent 27 hours on the road my brain was not up to the task. I turned it off, threw an extra blanket on the bed and went to sleep.

Wednesday morning I got up and it was colder yet so I had to act. I opened the slider to my laundry room nee sun porch and cranked up the dryer figuring the lack of an external vent would finally pay off for me. I did get the room up about 1 degree which caused the icicles on the dining room chandelier to start falling with a loud report.

I had to go to both the police station and the local government to register my return from the States and to re-apply for my Alien Employment License so I had Jiang waiting for me downstairs around 8:15. It was nice to go outside and warm up a bit and he must have been either reading my mind or the daily reports from the intelligence services because he had a tall Starbucks coffee waiting for me, what a great guy. On the way to the police station we had a chat about my heating situation. I had heard in the past that the heat in China is controlled by the government. As in they have steam plants scattered around the cities and they decide when it’s time to warm people up. And I’d heard an English language news broadcast while waiting for my plane in Beijing, a story centering around how angry the locals were because it had been pretty cold in the capital last week and the heat was not yet on. The government had explained that the engineers needed to clean the pipes and do some tests and everything would be flowing before anyone actually froze to death. Apparently that response was not popular since just about anyone might figure that perhaps the engineers merely needed to start a couple of weeks earlier. Jiang told me that November 15th would be Heat Day here in Dalian and that we’d just have to wait. He said the northern cities get theirs before everyone else and that meant the 1st of November. Dalian, being a “warm city” was down the list a bit. The prospect of existing at 62 degrees for two more weeks did not warm the cockles of my heart.

It turned out that my appointment was an hour later than I thought so I decided to head back home for the remaining 45 minutes. On the way there, Jiang convinced me that my monstrous dining room unit had to be a heater as well so I resolved to figure it out, being now of sound mind after a decent night’s sleep.

The great thing about Chinese appliances is that their buttons are in Chinese. I’ve been through this with multiple washing machines and the way I’ve arrived at clean clothes is to just punch buttons until the water flows and then walk away. A heater/air conditioner is a bit different because there is no water to come on. Air might flow but who knows if it’s going to be hot, cold or indifferent? And unlike my washer whose display was limited to times, this unit was covered with little illuminated icons that I could sort of make out under their smoky plastic covers.

I took the remote control and tried a few things, figuring I’d start with the air conditioning because that had been working quite well. I raised and lowered the temperature but nothing substantive happened – it kept blowing ambient air. I suspected that the “snowflake” icon probably needed to shut off so I proceeded to push buttons on remote. I did manage to raise and lower the fan speed, but air flow volume really wasn’t a concern at this point. One button turned on a cute leaf icon; I suppose indicating some kind of “green” power management. But the snowflake was obstinate and no matter what I did, it continued to taunt me.

I got a bit closer and looked at the other icons – there was one that said “power save” and one that looked like a chemistry drawing representing some kind of Oxygen processing. The was a big drop of water with a negative sign in it and a frying pan with heat radiating out of the center. A clock and something that looked like three hard boiled eggs standing on their ends under a bridge with waves coming out of their points rounded out the right side of the panel. On the left we had that annoying snowflake, the leaf, a fan and the universal automobile symbol for recirculation. Those, plus a sun.

Nothing I did with the remote was working so I switched to the buttons on the system. Nothing I did would illuminate anything on the right side so I concentrated on the left pushing one button after another and on in particular that seemed to cycle through the options. The leaf came on and the snowflake went off. The snowflake came on and joined the leaf. The fan and the recirculation light blinked off and on in concert. Finally the sun came on and the air stopped flowing. I adjusted the temperature to something absurdly warm and stood there – no air. I ran through the sequences again and the snowflake returned, newly emboldened and refusing to leave. I finally managed to get the sun to kick the snowflake off but still no air. I got thinking that perhaps the sun was for really hot days and so would give me even more cold air. All the while I’m doing this, the automatic vents at the top are opening and closing like the eyes of some giant cold water fish, nearly frozen to a stupor. I stepped back and watched, resolving to touch nothing for five full minutes. Four minutes and 15 seconds into my button pushing fasting period the fan kicked on and hot air began to flow. The sun was the answer and the lag was due to the internal nuclear furnace building up the heat necessary to flow – I was on my way to warmth!

Later that day I had a discussion with my Chinese colleagues about this whole heat situation. While I was now willing to accept the fact that the Worker’s Central Heating Committee of the People’s Republic of China was going to control the day that my place would be warm, I was not yet willing to roll over and let them control the temperature too. You see, my place has no thermostat. Everyone told me the same thing – “no”, no control. I sent a letter to my relocation consultant who at least cleared up the method – radiant floor heating adding that if I was not happy with the temperature or if any major leaks occurred, I should give her a call. I was not satisfied with this and so I asked around until finally I heard a tale, almost certainly apocryphal of valves and pipes, secreted away somewhere in every apartment, giving that tiny bit of control in this totalitarian society. I resolved to find them and following lots of crawling around, knocking on the walls looking for hidden panels, measuring rooms looking for unmapped spaces and peering in closets, I found the valve manifold – it was right there, under the stove.

And so now we have it – the water comes on the 15th, my dining room unit blows hot air on demand and if the two of them try to roast me, I can crawl under my stove and stop down the valves to limit the flow. Of course under there I will have to act on the main flow valves because the room pipes are not labeled but I suppose gross control is better than no control at all.

Can you imagine what it would be like in the US if it was up to your congressman to decide what day the heat came on? Perhaps the Tea Party and right wing talk radio people should shut up and count their blessings. 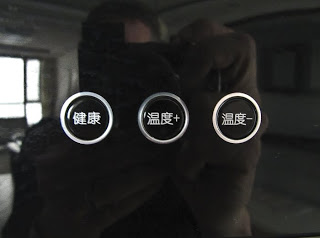