It was nice to be home even if most of my time was spent fighting off some strange Chinese flu-cold that would not respond to even the most nuclear medicines. Now normally I see some improvement in symptoms from any of the regular suspects – Benadryl, Alka Seltzer, decongestants – but this disease had a mind of its own. It laughed in the face of single doses and chortled louder when I doubled them up. And when My Lovely Wife came down with it and had the same response, well, I pretty much understood right then that we were not dealing with a dime store variety head cold. Who knows what it was, but at least it’s mostly gone.

I suppose it didn’t help my case that I laid around on the couch for a couple of days and then went off to a hotel in Phoenix. Even then things might not have been too bad had I not been given a room that had clearly suffered from some sort of environmental disaster. My guess is that a smoker used the room before me and the hotel responded by fumigating with some sort of cloying industrial strength de-stink-ifier which in turn put me into some kind of shock. For most of last week I couldn’t figure out if I was fighting the flu or my body’s response to chemical overload. In the end it didn’t matter, I came home after a couple of days returned to the couch and waited out the last of whatever it was that I’d brought home with me. At least my house didn’t smell like an engineered aroma. I took it easy and finally beat this thing back, all the while guiltily watching My Lovely Wife sink into despair as it took hold of her.

I’m a bit of a crossword fanatic, and because of my time spent away from home I had to develop a strategy to keep pace with one of my life’s loves – the Sunday New York Times puzzle. I’ve done it pretty regularly since my teens, with gaps here and there always closed by catching up on the puzzles I’d saved. This job though put me on the road so much that I simply couldn’t keep pace so an accommodation was in order. Thinking about it for a bit, I finally decided to copy the puzzles during spells at home and carry them around to do on airplanes. And this worked quite well until the other night.

I’ll admit to being about 3 months behind at the moment so my folder is a bit fat. When I left for Phoenix the other night, I only brought two forms of entertainment – my eReader and my folder of crosswords figuring I’d finish one up and start another on the short hop over. And the plan worked just fine, I completed a puzzle I’d started the previous week on the ride home from China and started another. Cruising through it, I came up to 77 down and realized that the clue was missing. Looking ahead, I found that the clues from 77 to 93 were simply not included on my sheet. I pulled out the next week’s puzzle and the one after that, eventually skipping ahead to the final copy I had, from the 1st of November. Lo and behold, they all had a huge gap in clues, 15 to 20 of the final “down” questions. Something had changed.

I pulled out the previous puzzle, successfully completed, and had a look – they’d changed the layout of the puzzle page in the magazine, increasing the puzzle square and extending the clues down the middle of the page. Essentially I had 22 puzzles waiting to go, missing a third of the clues. For grins I tried to forge ahead but found quickly that it’s tough to clean up the bottom of a puzzle when you don’t know what questions are being asked. Especially all those dozens of short on letters “down” words. The saddest thing perhaps is that the old way allowed me to copy the puzzle across the page in “landscape” which gave me a nice wide tableau to work with in my lap. The new design requires an upright copy and is far less lap friendly. Ah well, progress marches on.

So my special thanks goes out to Will Shortz for allowing me to copy a pile of puzzles that now reside in my scrap paper pile. I guess I’m glad I figured it out between Albuquerque and Phoenix and not San Francisco and Beijing. 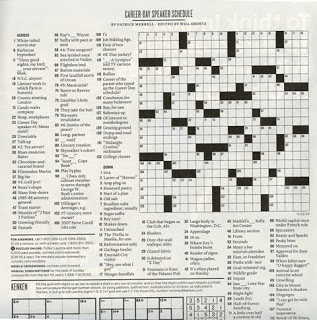 Last time I flew out of Albuquerque I had the sublime experience of watching the early glancing rays of the sun catching the tips of the canyons and mountains of New Mexico and Arizona. Unfortunately I didn’t have a camera in hand and so missed recording them. Today I was prepared, taking my first picture of the bleak empty Albuquerque Sunport runway at dawn, a picture that pretty much sums up how I am feeling today. While today’s sunrise show was not as nice as last time’s – it was much hazier today – I did jump up and get a few nice shots of the Grand Canyon at first light. The Captain announced its presence on the right and I jumped out of my seat and headed over there, that row being thankfully empty. I spent a while sitting there soaking it in until the flight attendant who had snuck into the next seat scared the heck out of my by simply being there unexpectedly. She was wondering what I was looking at. 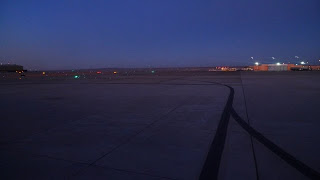 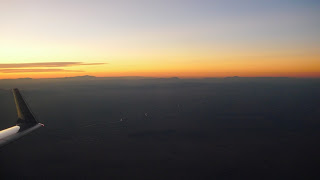 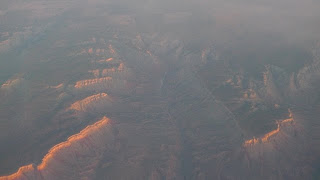 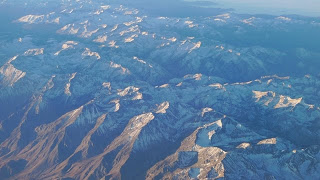