I went out to dinner the other night with some friends. The place was a pretty fancy Japanese restaurant off Renmin Lu in downtown Dalian just across the street and up the block from my old digs at the Shangri La Hotel. This section of town has recently been recast as the luxury shopping district with two new steel and glass-clad modern malls featuring all the big names – Prada, Versace, Armani, etc. I’ve been to them once and the most noticeable thing at that time was their lack of shoppers. While the Chinese have an insatiable hunger for top tier brands, most of the salaries have not yet enabled that kind of consumption. And tonight was no different – it was cold in only the way a damp Manchurian seaport can be in January and the few people on the street were far more interested in when their bus was arriving than in looking at the fancy things in the windows.

The restaurant continued the neighborhood motif – lots of glass panels, marble stairs, low lighting and elegant wall coverings. We arrived and were escorted up 5 flights of stairs to our private room. Why they didn’t have an elevator, I do not know because normally the restaurateurs assume you come with an appetite and not that you need some time on the stair-stepper to develop one. But up we went, following our hostess who like all the other girls in the place was togged smartly in a long black skirt complemented on top by a snow-colored vest crafted from what must have been a Yak hide. Suede on the outside and furry on the inside with little white tufts bubbling out of the neck and arm holes. This being a Japanese restaurant there was a lot of bowing going on, with stops at each landing where we were greeted by that floor’s staff. You never know how low or how many times to bow because each time you do it, they do it too with even more solemn gusto. Eventually we got where we were going and took our seats, just a bit sore in the lower back from all the displays of politeness.

Private rooms are very common in Chinese restaurants and almost always provided when you have a party of more than four. They can be great if you’re all friends and you want to get rowdy or just have a lot of conversation going on. They can also be horrible if you don’t know the others very well and downright horrific if you’re the only one in the room that doesn’t speak Chinese very well. That was the story the first time I went out with my driver and I remember that my iPod ended up with a solid coating of lamb grease from me trying to translate with the same fingers I was eating with. In either case I don’t particularly like them because a big part of dining out for me is the people watching. Especially here, honestly where else can you see men remove their shirts when the food gets too spicy? So while the dining experience allows you a more intimate encounter with your friends, you lose the show the other diners provide.

The rooms generally have the same theme – a big round table with the world’s largest Lazy Susan in the middle, a small private bathroom, a sideboard in the corner for serving the beer and utensils and a big screen TV in case anyone is worried about missing their favorite Chinese variety show. Sometimes there is a Karaoke machine in the corner for those customers plowed enough to want to sing after dinner. This room followed the checklist to the letter except that one wall was a beautiful saltwater aquarium and the Lazy Susan was replaced by a big Japanese Teppan grill. Ringing the grill were alternating bands of red and white rose petals – a nice and unexpected touch.

Chef came in and started to do the whole Benihana thing with the oils and the spatulas and the knives and the spices, cooking without break for about 3 hours. We ended up browsing our way through 26 courses and an undefined quantity of those extra tall Chinese beers. Some of the dishes were for the record books, some merely normal.

Here they are, with comments –

1. Sea Urchin – I’ve had it before and every time I eat it I swear it will be the last. The first one I ever had tasted like a saltwater Mangrove estuary smells at low tide – an interesting blend of salt air, sand and decaying vegetable matter. In the third world you can throw in the slightest hint of untreated sewage. Tonight’s offering was not nearly so foul in taste and was actually pretty mild. If you get past the consistency and color which brings to mind chilled infant poo, you probably could choke it down.

2. Some Kind of Soup – it was cooking there when I arrived and we each had our own little teapot full of it sitting on a flame. My flame went out when the soup was tepid. They told me to squeeze a lemon in it and I did. It tasted like dilute lemon juice. My Lovely Wife might have liked it.

3. Sea Cucumber – the last one of these I had was intact – six inches long, charcoal gray, covered with knobs and the consistency of a boiled hot dog. Tonight’s was chopped up, swimming in vinegar, mostly tasteless and brought to mind little fragments of sun-dried garden hose.

5. Dalian Rolls – the local version of a California Roll, I was turned off by the ketchup and mustard squirted hither and yon in an attempt to provide a festive turn on white rice.

6. Barbequed Cod – this….was….really….really….good! Tender white fish with a slightly sweet brazed finish. I ordered a second and third round.

7. Barbequed Eel – I tried it because I’d never eaten Eel. It wasn’t offensive.

8. Lamb Shank – tasty preparation, but really hard to eat for anyone other than Cavemen who might be used to eating right off the Big Horn Sheep. We all know that some things are so easy that a Caveman can do them but this one turned the tables in favor of our progenitors.

9. Brazed River Fish – the whole fish from head to tail cooked in some kind of brown sweet and sour sauce that was rich and sticky. Another win for the chef.

11. Big Brown Mushrooms – two inch diameter fungi pressed down onto the grill and held there until the escaping steam made them “scream.” Served with a big slug of sautéed garlic – no Vampires tonight.

12. Scallop in the Shell – a large sea scallop cooked in the shell. While it tasted okay, I now understand why they don’t sell them with all the sundry pieces and parts that are normally in there. The muscle is good, the rest is rubber bands.

13. Giant Shrimp – about the size of the handset on a cordless telephone it was served “head on” which I hate because I can’t stand those big black eyes staring at me. It tasted like a shrimp.

14. Beef Tongue – I’ll tell you this – while I love Cousin Barbara’s Tongue Rendition, the Chinese really know how to cook this cow part. It was as smooth as butter and tasted like heaven. Especially after that big black-eyed Shrimp.

16. Soft Boiled Egg Surprise – an egg shell with the tip cut off re-filled with egg custard and a little chunk of goose pate. Cooked on the grill in a special wire stand and served in a crystal egg cup. Topped with a spoonful of caviar. It was a pretty darn tasty concoction and I liked it.

17. Bacon Wraps – a little piece of undercooked bacon wrapped around a piece of grilled celery and jammed on a toothpick. What could possibly be wrong with bacon, right?

18. Clams – cooked in the shell on the grill, I didn’t eat them because I don’t eat shellfish that comes from Dalian mudflats.

19. Crab Legs – I dunno, I used to think that crab legs were special. These days, no so much.

20. Hairy Crab – a big pile of soft-shell crab parts. I fished around in there for a while looking for something edible but couldn’t find it. The inside of the carapace was coated in something that looked like a cross between Sea Urchin and orange-colored soft-boiled eggs. I wasn’t about to waste a lot of time sucking whatever meat might be inside of all those tiny little legs. I took a picture of it and sent it on.

21. Beef Cubes – some kind of hand-massaged beef-backside that Japanese businessmen make a lot of noise about after 18 tiny pots of Sake. It sat marinating on the grill for the first two hours we were there and I was glad when it showed up, cooked to raw and served with tiny little desiccated slices of garlic. Another win.

22. Shrimp Balls – blender-ized shrimp parts rolled and breaded and deep fried and served in a gooey red sweet sauce. Garnished with that green stuff that comes in Easter baskets. Not nearly as bad as that might sound. And they had no eyeballs that you could see.

24. Straw Mushrooms – the fungus course I skipped because I wanted to save room for desert.

25. Bananas Flambé – coated in shredded coconut, grilled, and set on fire with brandy while the lights were out in the room. Topped with a little scoop of vanilla ice cream and certainly worth skipping the fungus course.

26. Fresh Fruit – that old Chinese standard, watermelon, honeydew and winter melon, a white fleshed version of our cantaloupe. The perfect end to the perfect meal. 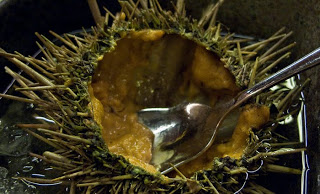 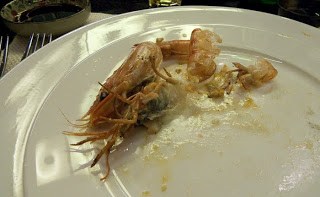 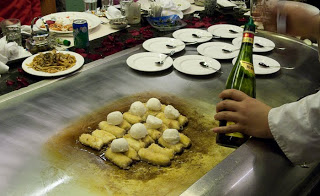