We had another dinner at the Face Bar, this time Indian and among considerably more patrons to top off the day. Getting there was a challenge for the second time as the taxi driver insisted on dropping us off at the end of the wrong dark alley. My Chinese got us through.

Sunday was spent at Factory 798, an art colony out on the way to the airport. It’s a district of former munitions factories converted to lofts, galleries and ateliers. Modern art in China reminds me a lot of the publicity around Russia when it opened up back in the 1980’s. Lots of work that was both bizarre and political within limits. In most cases I’m sure the artist thought they were being crafty. But their message is often so blatant in its simplicity that it ends up coming across as snarky; in the way a teenager often thinks they’re being wry. For the most part, the government looks the other way as long as the message is not too pointed. And I didn’t see much of that on this day. The most interesting thing might have been the items for sale featuring a picture of our President, often in a Mao uniform and branded as “Maobama” or “Obamao.” Would our right-wing thinkers find that amusing?

I did have one interesting experience; I was interviewed by a young woman from Mexico City who was accompanied by a woman from Beijing. The Mexican was here learning Chinese and teaching Spanish at a language school. The Chinese was learning Spanish and English. Each of us was only fluent in our mother tongue. But the three of us chatted in all three languages for a half hour or so, them asking me the most ridiculous questions about modern art that in the words of my companion “Sounded like utter BS.” Well, sometimes it’s okay to wax like an Art Forum columnist when you’re having a tri-lingual conversation with two cute young women. We called it a day around noon; it was just so cold to be out wandering around. Interesting place, I’d like go back when it’s a bit warmer.

We grabbed a cab and headed back to Sanlitun, the bar street in the Chaoyang District that acts as a convenient beacon for cab drivers. The street itself is a dive, being nothing more than an endless strip of seedy bars filled with seedy bar girls. It’s hardly worth mentioning except for the fact that it runs between an upscale shopping center called The Village and the diplomatic district which contains all the consulates and embassies in Beijing, conveniently situated behind brick walls and barbed wire. Walking down Gongrentiyuchangbeilu, you can see the flags of all your favorite countries. We passed a group of young men in military uniforms, falling out of a bus and being lined up for inspection prior to manning the gates of the compound.

When I got out of the cab, I asked the driver for the Chinese name for this place; he said it to me but I forgot it almost instantly. So when we found a table at the Blue Frog, everyone’s favorite expat restaurant, I asked the waitress. She told me “This is the Village”, with “village” coming out more or less as “willage.” I told her that the cabbie had given me a Chinese name and she shook her head “no.” I asked again and she brought over a friend. They had a 15 second discussion in Chinese and the friend returned the same answer, “This is the Village.” It struck me at that moment that I was re-living an episode of “The Prisoner” that cult classic from the 1967 in which Patrick McGoohan is spirited away to some sort of re-education country club called, “The Village.” He tries and tries to break through the mindlessness of his fellow inhabitants, asking repeatedly where he is. And the answer is always the same – “This is the Village.” I never imagined that it would happen to me too.

The shopping here was pretty nice with many upscale stores including the biggest Apple Store I’d ever seen and a North Face boutique that featured, literally, an ice wall inside a giant refrigerator. The signs suggested that they might have ice climbing school but it wasn’t completely clear. If not, what could possibly be cooler than your very own ice wall, no pun intended? I suppose you could pull on the North Face expedition down jumper and hang out in there for an hour or so to see if it would keep you warm. Or what better way to test those gloves that I can’t seem to find. The ones that actually keep your hands warm. Well, no chance of that – this store didn’t sell gloves. But they did have a lot of nice shiny jackets that then Chinese girls were passing around and trying on.

The remainder of the day was spent getting to the airport. Two things of note here, the first was a Starbucks that had table service. We didn’t completely figure that out until after we had bought our drinks and sat down. Sure enough, the lounge had waitresses. I this the only Starbucks where they bring your stuff to you? It’s the only one I’ve ever seen.

The second was so very strange. We cleared security and went to the gate which was downstairs and so indicated a bus ride out to the plane. This particular flight is common for me – I use it whenever I return from the US and lately the bus ride has become the norm. Today we waited, boarded the bus, breathed our fair share of diesel exhaust and then departed on time. It was getting late and in the dusk I could see the planes lined up far out on the tarmac, silhouetted by the setting sun. When riding one of these conveyances I always try to figure out what plane will be mine, and how the bus will line up relative to the stairs. Of course I’m plotting the fastest route to the best door to get to the head of the queue because standing out there on the vast asphalt field in the Gobi winter is very unpleasant. This time though they threw me a curve ball – the bus pulled up at a set of stairs below a jet way that was attached to the terminal. We’d driven out to another gate. A gate which we could have walked to and waited at, inside.
There is no explanation, other than, “This is China.” 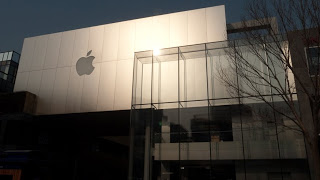 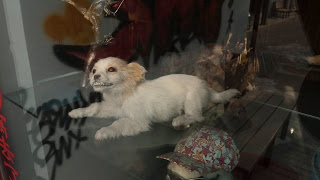 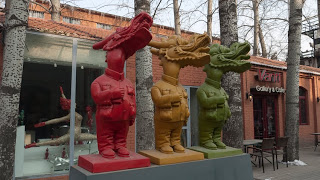 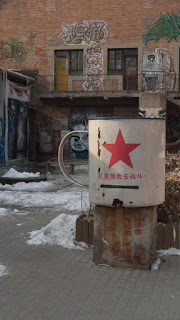 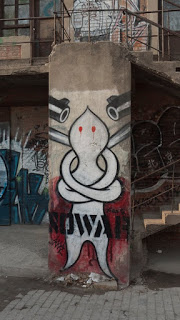 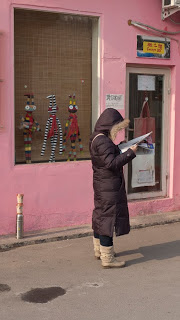