Just before heading off to Beijing last Sunday to meet my kiddo (see blog “My Day at the Airport”) I took a walk to the local statue factory. I found this place a little more than a year ago on one of my very first bike rides here in Kai Fa Qu. On that day I was looking for a way up and over to Big Black Mountain, one that didn’t exclusively involve using busy streets, and I found a way around the park across the street from my apartment. At that time, there was no road through the park and so I went off to ride around it.

On the far side, reality was not what Google maps had insisted it was – I could not see a road that went the way I wanted to go. So I improvised and started up a quiet street through an industrial district. Two blocks into it, I was graced with a vision of a giant Buddha, sublimely staring at me from above the trees. Of course, I stopped and had a look, and what I found was remarkable – a big factory lot full of dinosaurs, soldiers, cows, horses, Bodhisattvas, the busts of all the great Communists and many more things. Around the corner were there less fortunate friends hidden away, ice skaters and dancers missing arms and legs. How they were made and for what purpose was not instantly clear. I stopped though and took some pictures enjoying myself until some guys walked over from their food vending cart to see what I was doing. I packed up and left with the intention of going back with a better camera and more personal courage.

When you’re waiting to go to the airport it’s often a good idea to find something to do. At least it is for me. I had a couple of hours to kill before Jiang would show up and I figured that since it was a reasonably nice day, I could make it over to the factory and back in plenty of time so I gathered up my gear and headed down the elevator. One small improvement in the last year – there is now a paved road up and over the hill in the park, which makes the trip far more direct and so faster. I’ve never gone this way though and in choosing the newly opened portion I discovered that a parallel old weedy route was even faster and more direct. I noted that for the future and went down the hill though small flocks of migrating songbirds flitting back and forth among the pines. I saw one that was quite beautiful and new to me, making a mental note to check it later and to start throwing a pair of binoculars in my bag when I head out like this.

For some reason the district I was entering always seems to have hordes of hip-hop and Emo boys. In China they’re the only young men with puffed up hair-dos and they tend to stick out like sore thumbs. I seem to get a lot of attention and attitude from them for whatever reason and today I fell in between a pair, one tall and made taller by his hairdo and another short and made shorter by the giant black hoodie he was hiding in. While they kept looking back over their shoulders at me, I knew I had nothing to fear, but I kept my distance anyway because I simply wasn’t interested in whatever they may have had to offer. They turned a corner and I went on my way.

I managed to spend an hour there taking photos of all my favorites, interrupted only by the occasional pair of Chinese girls that walk by and say “Hello” in English and giggle at themselves for saying it. I’d answer and they’d only giggle harder, covering their mouths as they walked away arm in arm. I left when I was satisfied that I’d done justice to the Stars of Communism and walked back a different way, making note of a tall tower and wondering if I could see this place from my apartment. Upon my return, I picked up my binoculars and took a look – sure enough, from my study window Buddha sat there resplendent above the wintertime trees, looking my way. 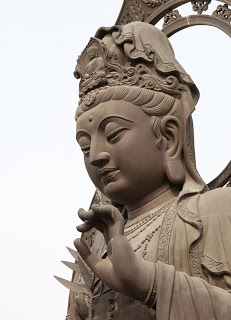 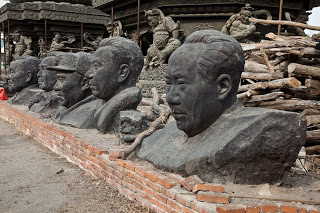 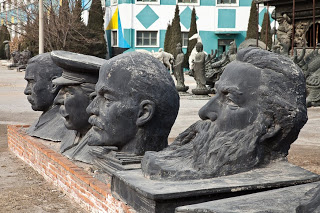 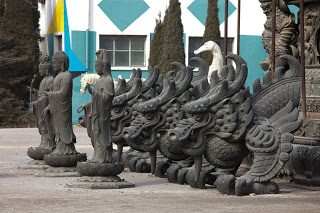 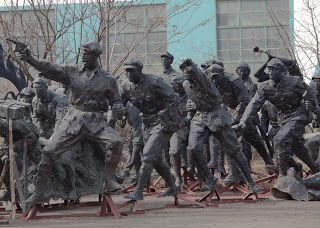 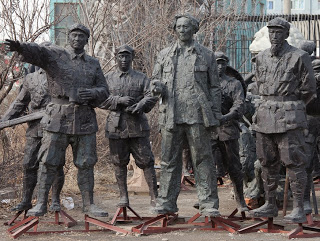 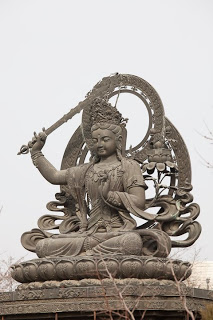 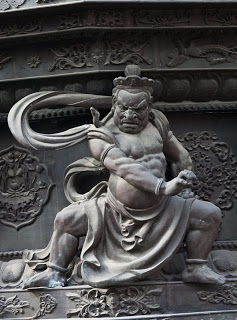 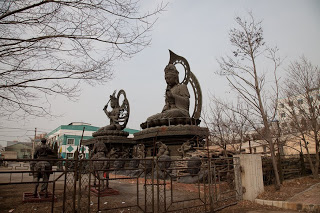 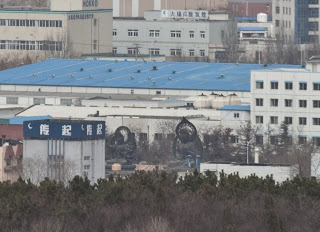