On my very first real visit to Beijing I stayed at a hotel just around the block from the relatively world famous CCTV building. Whether or not you know it by name, I’m sure you know it by sight – a giant steel and blue glass pretzel that defies an explanation as to what holds it up. The first time I saw it, it was on a cold clear northern China morning and the sight of it standing out against the bright blue sky was quite breathtaking. The Dutch architect Rem Koolhaus did an amazing job designing and building it and it has become an iconic part of the Beijing skyline. It serves as the headquarters for China Central Television and was completed (exterior only) in July 2008. An accompanying television production center and hotel/entertainment building stands next door; a very plain and common design which I happen to think diminishes its glitzy neighbor. No worries because on February 9th 2009, the final day of Spring Festival and my favorite day of the year, Lantern Festival, the production center was set ablaze by guess what, fireworks. They were being set off from the top of the CCTV tower, and they ignited the skin of the building next door. A fireman lost his life fighting the blaze and the whole thing was a giant embarrassment for a local government that is touchy on a good day.

It was quite a scandal at the time because CCTV didn’t cover the fire which of course it should have being the country’s news television monopoly. It stood there burning with no official word until someone finally pointed out that it might be consistent with good news reporting practice to provide live coverage of the biggest story of the moment. The building is now not considered to be a complete loss – they claim that only the exterior is damaged. But I don’t know, it looks pretty wrecked to me standing there all rusty and charred. They hastily erected a tall barrier around it to hide the problem and until just this week it was nothing more than a bunch of rusty steel sheets. As of today those sheets are covered with cheery skins depicting a bright and sunny future for the sight.

I find myself in Beijing for what I think is the 7th night since the 14th of March. Between two segments of Spring Break 2010 and a night spent on my way down to Yunnan, this hotel has truly become a home away from home. This time I’m on the first of three legs back to the world for a little R&R with My Lovely Wife, my Adoring Dog and those ever Ungrateful Horses. Having been stranded here one time due to a late Dalian departure, I now leave the day before, check into this hotel and spend the night in nice surroundings. No early wake-up, no rush to the airport, no worry about the 1st leg to Beijing, I eat, I sleep and I get up at a reasonable hour before starting the long journey home. It is so much better in so many ways that it’s become de rigueur for every trip back to the world.

After arriving and checking in I decided to take a walk down to the CCTV site to (finally) get some close up pictures of the destruction. But first I made a stop at the Starbucks next door for an Iced Americano and had the very odd experience of accidentally taking the same drink intended for a different customer. The barista handed it to me, I put a straw in it and then the mistake was realized. The correct owner left with my straw in it, something I thought sort strange but apparently of no difference to him. I waited for mine and traded multiple instances of “I’m really sorry” from the barista with an equal number of “Mei wenti’s” from me.
By now it was rush hour in Beijing and in the week since my last night here, spring had arrived; the temperature was a balmy 70 degrees, the sun was setting and the streets were mobbed with commuters heading home, the gas grills were heating up and filling the air with a myriad of enticing aroma. The street vendors had set up shop outside the Goumao subway station selling Tibetan silver, baseball hats, wallets and tights. I headed north along the Eastern 3rd Ring Road and crossed over just before the building site. I took the time to walk around the block and got a few photos from all the decent angles. A group of young men walked by me at one point and said “laowai”, “foreigner”, as I stood there taking pictures on a side street. Foreigner here is a funny appellation because you see a lot of westerners on any walk about town. Tonight in my 90 minutes of wandering around I probably passed 20 or 25, far more than you would ever find away from a tourism center.

I crossed back to the hotel’s side of the street and almost got clocked by a bus in the going. For some reason I suddenly imagined I was Chinese and followed a couple of young guys out into the middle of a boulevard against the crossing light. It would have been fine were it not for the fact that the buses were electric and the overhead wires cut an angled path right across where I was standing. I just stepped back and forth until an opportunity for me to stare down an oncoming car presented itself and I made my way safely to the far side. I guess after all this time I’ve become a tad more Chinese than American when it comes to crossing the street.

So tonight I find myself once again sitting in the lounge looking out over the city, eating deep-fried yam filled spring rolls and listening to a pretty good tape loop of Brazilian Jazz of all things. Tomorrow I’ll get up at a reasonable time, eat a nice breakfast, pack up, check out and head to the airport where I’ll make my way to the next lounge and wait for the big bird to bring me to the lounge after the last one and then, finally home. 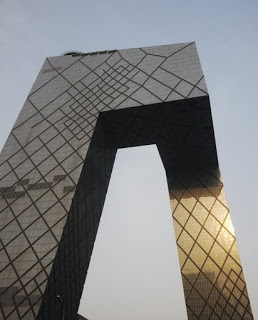