Taiwan is an easy two hour flight across the sea from Dalian and I’d been thinking for the past year that it might be a nice adventure, perhaps one in contrast to the varied places I’d been on the mainland. When my colleague Ben, a native Taiwanese suggested a trip, I jumped at the offer. I had no idea just how much of a contrast it would turn out to be and having seen it I now have an idea of what China could be. But I doubt it ever will.

An unbiased history of that fair isle is hard to find at least via the internet. Most of those writing of it seem intent on making as strong a case as possible that Taiwan has stood alone across the millennia with no tangible relationship to China itself, much the same case that is made for Tibet. But some historical truths can be gleaned from amid the competing agendas. Taiwan was first peopled by seafarers from south Asia, perhaps 10,000 years ago. The linguistic and genetic stock that remains there today among the aboriginal people is identical to that found as far afield as Hawaii and Easter Island and genetic testing has confirmed that all of Polynesia was populated by those that set sail from Taiwan, 6-8000 years ago. The customs, pottery and motifs of the true native population look much like those that you would find on any Pacific island and in central Mexico for that matter. And like those distant cousins, the aboriginal lifestyle on Taiwan is quickly disappearing.

The Portuguese first brought Taiwan to the attention of the west when they made a log note listing it as “Ilha Formosa” or “beautiful island” while sailing past it in 1544 on their way to Japan. That appellation was the first record of the name that Taiwan would carry into the modern age. The Dutch made a serious attempt at colonization in the 1600’s with the intention of building ports for trade with the mainland and Japan. In the 1640’s they ran off the Spanish who had similar designs and had slowly been adding their own forts for the previous 10 years. In addition to trade, they employed the local population in cultivating sugar cane and harvesting the apparently abundant deer population whose pelts were highly valued by Japanese Samurai for use in their armor. Dutch rule came to an end when a naval force under the Chinese general (or some say pirate) Koxinga landed while in flight from the Manchu who were in the process of dismembering the Ming Dynasty. He hoped to use the island as a mean to re-establish the defeated Ming but it came to naught and he died without achieving his aim. His grandson Zheng Keshuang surrendered control of the island to the newly formed Qing Dynasty in 1683 and although the Qing emperors viewed Taiwan as “little more than a ball of mud beyond civilization”, they oversaw a large influx of Han Chinese from the southern provinces, particularly Fujian. Japan and the Qing went back and forth over it during the 1800’s with Japan trying and failing to invade and the Qing alternately claiming and denying ownership. It remained a mostly ignored remote province until 1895 when it was deeded in perpetuity to Japan following the conclusion of the first Sino-Japanese War. Japan oversaw a modernization of the island with the construction of extensive road works, train lines and buildings. Naturally they also tried to make the population Japanese through forced name-changing and language instruction and this in turn led to a constant series of uprisings and rebellions. Despite the harshness of their governance, it seems a lot of their organizational influence remains today at least compared to the mainland which was in relative chaos during the same period as the warlords and Communists struggled for control. The Japanese remained until their defeat by the Allies in 1945 when the island was returned to the current government in residence – the Nationalist Koumintang led by Chiang Kai-shek. There was considerable dislike by the Taiwanese for the new rulers which led to further uprisings, massacres and martial law. However it all became moot in 1949 when 2,000,000 Nationalists fled the mainland in the face of the victorious Chinese Communists and established the Republic of China. Taiwan was recognized as the “legitimate China” by the United Nations until 1971 when the People’s Republic took over the seat that had been held since 1949.

The first thing that greeted me when I landed was the biggest, cleanest, emptiest airport I’d ever been in. Up to this point, Seoul’s Incheon airport has set the example of what an airport should be; Taiwan’s Tao Yuan took my expectations up another notch. The marble clad corridors were wide and spacious and cool, dimly lit and devoid of people. Immigration had endless open gates, run by friendly young people with perfect, California English. I had a brief chat with the young woman handling my visa about how to say “zero” in common English conversation. She asked me if I had been on flight “one – oh – five” and I said “yes, one – zero – five.” She picked up on that and I explained that “oh” works just fine, but “zero” is a far better way to go when there is any chance of confusion. She smiled, stamped my passport and sent me on my way.

We elected to take the bus into town since it went straight to our hotel. For the equivalent of $3 we were promised a nice upper deck ride in a cool clean bus. We went outside to wait and the second greeting hit me like a shovel in the face – I was in the tropics in a way I had never been in them before. Mexico his hot, Shanghai is hotter and I don’t dare imagine how hot the Philippines are if they are hotter than this. I can’t think of a more oppressive weather moment in my entire traveling life than the one when I stepped out of that glorious monument of an airport terminal and into the outside air. I had to wipe off my sunglasses.

But the bus came and we were on our way. The expressway into Taipei, the capital and about an hour down the road was wide and newly surfaced. The comparisons to the “real China” were starting already – the roads were safe and made sense, there was no trash, no one was driving like crazy-men, there was no constant blowing of horns as cars weaved across three lanes, and most of all there were not too many cars for the space available. Overhead was a bright blue sky with wispy traces of clean, white clouds. Bordering the roads were emerald green rice paddies, choked with flocks of gleaming white egrets and herons. I guess because they hadn’t all been eaten. The scenery really did evoke Japan, at least the southern prefectures that I had visited. While many of the buildings in the outlying reaches of Taipei were old and shoddy, they didn’t have that same moldy shopworn nature that I have come to expect from that same period architecture in Dalian. I sat there mildly stupefied that the place was that different, all of that in only an hour’s worth of visit.

Once in town the thing it was obvious that cars are just not so common. It was rush hour and there was traffic, but it was composed of hordes of motor scooters. I don’t think we waited for more than a single green light at any intersection. The sun was going down and the light was beautiful as we drove down long boulevards under a canopy of palms and banyans, wispy fronds dangling down and brushing the top of the bus. Off in the distance I caught sight of Taipei 101, the second tallest building in the world if you can call its rival, that thing in Dubai a “building.” It looked quite impressive yet so out of place given that it had no neighbors that competed with it for miles in every direction. We passed through a construction zone that appeared to be for a new train or subway tunnel judging from the giant boring machine that sat being serviced at street level. The traffic just flowed, in Dalian we would have been stuck for hours; such is the subtle difference in planning mentality between the two places.

The Grand Hyatt is in a beautiful treed district that surrounds Taipei City Hall. We checked in and agreed to meet in an hour. Having nothing better to do I decided to go for a walk and headed back out into the still oppressive heat and humidity. I had no plan so I took a right and walked two blocks and took another right and walked another ¾ of block and stopped and looked up. I found myself at the very foot of that amazing skyscraper I’d seen from afar just minutes ago. It’s one of those buildings that makes you feel like you’re going to fall over backwards when you stand at the base and look up. Done in an interesting “pagoda style” and clad in bright blue with modernized Ming Dynasty details, it was certainly like no building I had ever seen before.

Despite being second in overall height, it currently reigns as the tallest structurally, at roof level and in terms of occupied floor. It stands at 1660 feet tall to the top of its spire, a mere 1469 feet to the roof and 1437 feet to the observation deck on the 101st floor. It has 61 elevators including two that are the fastest in the world traveling at 3313 feet per minute (38 miles per hour). They will bring you from Basement 1 to the 89th floor observatory in 39 seconds.

I wandered around trying to avoid falling over and took a few photos. Every angle was photogenic. I was surprised to find a rendition of Robert Indiana’s famous “LOVE” sculpture that I had not seen in many years. Tired of having a crick in my neck, I continued on, turned the corner and realized that the side entrance of my hotel was directly across the street from where I had ended up. I was starting to get my bearings. 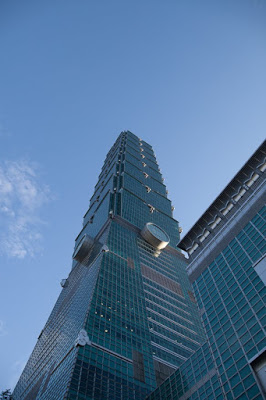 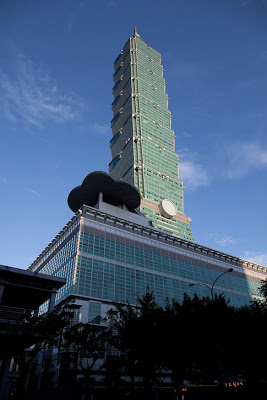 One thought on “Trip to Taiwan Take One”