I’m not ashamed to admit that while traveling in Asia, I tend to be a bit of a hotel snob. 5-Star accommodations are so cheap here compared to the west that it’s very easy to reconcile spending the same amount to stay on the Club Level in Beijing as you would pay for a plain room on Ray Road in Chandler, Arizona. While I shop hard when traveling in the US, I get wed to some chain over here and when picking a destination I hunt first to see if that brand is represented. If not, I go down the list until I find something close enough. Of course many of the cities that I have visited simply don’t have first tier hotels, but I can always find something that is no worse than the average hotel in the US. While I eschewed my normal Marriott/Shangri La choice in Taipei, instead deciding to slum it at the Grand Hyatt, it worked out well enough. The room was cold and well appointed.

Hualien though was another story. And compounding that was the fact that we didn’t plan to stay in Hualien but rather out in the countryside at a “farm house” that was recommended by Ben’s college friend. We had a lot of laughs, most of it gallows humor, trying to decide if it was indeed a house, or if it was a hotel. Did it have bathrooms and would we each have our own space? As the time for us to find the place approached and it became dark, the laughter took on a decidedly nervous tone. It turned out though to be a very nice place – 8 tiny cabins tucked in the banana trees about an hour outside of town across the street from Liyu Hu – Carp Lake – one of the local tourist destinations. We arrived, checked in and sat out on the porch drinking wine and listening to the Geckos bark while making plans for the next day. It was darker than dark and dead silent and for the first time in ages I could see the stars in a manner that was similar to what I would expect back home. The rooms were clean, tidy and very simple – knotty pine paneling, bed, dresser, make-up table and a clean bathroom that naturally had that most odd of Chinese inventions – the shower that is the room. Basically a showerhead on the wall with no stall or curtain which of course means that the whole place gets flooded when the water is turned on. The towels were special, harkening back to the story of My Lovely Wife and Cousin Barbara’s Dubious 1-Star Tour of Europe in which the bath linens were famous for their diminutive size. Mine was about the dimension of a dish towel, but at least I had two.
But best of all was the wall air conditioner. The proprietor came to my room and asked me what temperature I wanted, starting at 77F and then gasping as I kept saying “lower” until we hit 68. I told him that Americans like it cold. Nice, as it was a jungle outside.

Just after sunrise we went out for a walk around the little town. It was like lakeside tourist traps the world over, a long drag with dozens of little food stalls and souvenir shops across the street from a public park that fronted the lake. Everything sat in a green valley hemmed in by the same mountains that we had driven through the previous day. We found a woman with an espresso machine and had a cup of coffee as we wandered down the waterfront which was crowded with concessions renting paddle boats in the oddest configurations. My favorite was a swan boat with a Spoonbill head, the bird looking forward as though over its non-existent reading glasses. We sat and drank coffee and watched Night Herons fighting over a little mud island off shore. Far off in the middle of the lake, a person wearing the traditional rural Chinese conical straw hat sat in a low slung ancient motor boat chugging along on their way to somewhere, the boat’s wake being the only disturbance on an otherwise glass surface.

Our place turned out to be a bed and breakfast of sorts and our morning repast was delivered to our porches. Some strange piece of pulpy green fruit, sweet Nescafe coffee and a ham and egg sandwich served on two slices of Taiwanese Wonder Bread; or Bimbo if you prefer. After eating we went down to the office to look for bicycles because this was our opportunity to cycle on a bike path that would make my western peers cry with envy.

I am a pretty serious cyclist, so it was quite interesting for me to thumb through the available bikes, all urban cruisers with baskets and rusty seat posts, no doubt from living in this climate. I chose one and raised the seat as high as it could go, knowing that it would still look like I was riding a clown bike. But off we went, riding up the main highway and turning left onto a beautifully paved two lane road that wrapped around the backside of the lake. We rode along through the jungle, stopping to look at the view across the lake and to take in the flowery sites – red flowers, yellow flowers, purple Clematis. And more butterflies than I have ever seen – blues, turquoise, yellow, orange, black, white, red, spotted, striped and plain – every flower seemed to be covered with them. Taiwan has an incredible selection. Overhead, flocks of bright green birds that were new to me. It was so beautiful that you could almost overlook the fact that you were bathed in sweat. We stopped at one pull off to take in the sights and the sounds and friendly little lizard decided to climb on my shoe for a visit.

As we headed back to the ranch we passed a very nice Giant (brand) bicycle shop, put there solely for rentals. Great bikes and supplies and I imagine busy as heck in the high season. Behind it was a fish hatchery that seemed for some strange reason to specialize in Koi and other aquarium species.

The rest of the day was devoted to getting back to Hualien and our train. We spent quite a bit of time upstairs at Starbucks sharing the internet and watching the time tick by. Lunch was dumplings at the place next door to the one we had eaten in previously, our favorite being sadly closed on this day. No air conditioning here, and I wasn’t having the best of feelings as I sat there watching them hand stuff blanks of dough without gloves in the 90 degree heat. As it would turn out my uneasiness was well founded judging how I began to feel as our train pulled out of the station. By the time we reached Taipei it was clear that some food borne bug was about to have its way with me. Not the first time and almost certainly not the last. 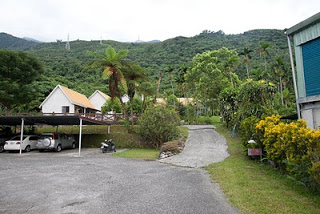 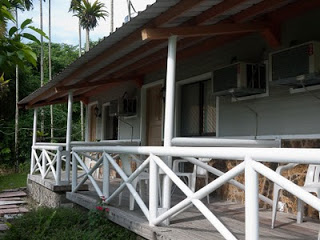 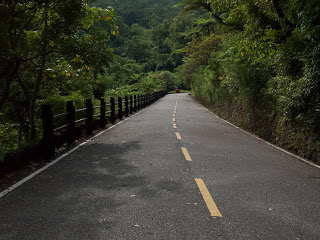 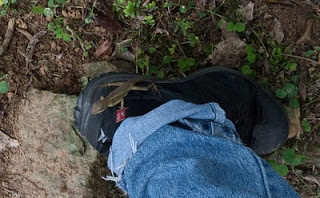 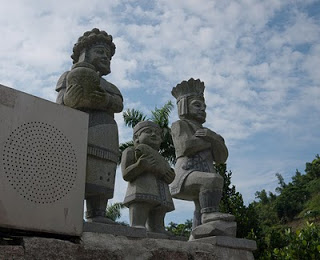 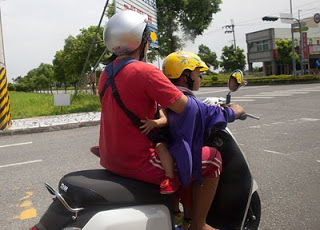