Skip to content
Date: April 3, 2011Author: tbaroundtheworld 0 Comments
We had a most unusual driver on our last trip to the airport. The weather had changed to rain – the first bad day we’d had over the entire trip. Sometimes travel planning just works out that way and it’s especially nice in a country like China where, unlike the great cities of Europe, there isn’t a lot to do indoors. Fewer museums than you might imagine. We packed up, checked out and asked the doorman to get us a cab. A red one pulled up, fourth tier in the Shanghai Taxi Quality Spectrum but it was what it was. The driver got out – on the short side with shoulder length hair, dressed all in black and sporting gold metallic painted inch-long fingernails on both hands. We spent the ride to Pudong alternately gagging on the overwhelming stench of cigarette smoke and theorizing about this guy’s night job.

Check in was a breeze as it always is, far better than the olden days when you’d have to stand around waiting until the gate agents would march out in single file, identical in their prim little blue uniforms. Security was another story when once again I got pulled aside for additional checking by the duty supervisor. I replaced my old passport last fall when the visa company told me that mine was in such bad shape that sooner or later I would be denied entry. I was sorry to see the old one go, what with dozens of stamps and two clumps of supplementary pages. My badge of honor, being retired. But the crisp new one was nice at least until I tried to enter Beijing last November and it took two levels of supervision to allow me in. I assumed it must have been a shock to their immigration system between many, many entries and exits, a cancelled residence visa, a new business version and an altogether new identification number. I had no problem leaving the country at the end of that trip or entering on this one so I was a bit taken aback when the guard invited me over to wait with him by the duty desk. I asked him if there was a problem and he smiled and said, “No” which of course was not true. I started to explain the story of my old one, at first messing up the Chinese word for the document, but he continued to smile and suggested that perhaps someone had the same number as I did. The international incident didn’t last long and I was on my way.

Having survived the punishing trip over in coach, I treated us to upstairs business class on the 747, in my mind the ultimate flying experience. Never mind the lack of overhead storage (which requires you to hand over your bag to the flight attendant at the top of the stairs) riding up there is so peaceful and pleasant that it almost makes 11 hours in an aluminum tube tolerable. We settled in across from a what was clearly a newbie business traveler, a short guy with a bad case of overcompensation who started the trip by begging the person next to him to switch with his manager from down the aisle and ended with stealing the menus no doubt to impress his wife with the wine choices. As we got going he downed 4 Rum and Cokes and passed out, depriving me of my mid-flight amusement. It also meant he stopped given a “High Five” to his colleague who for some reason visited the bathrooms 6 times on this trip. After food and wine I watched a heart-wrenching movie called “The Way Back” coming to actual tears when the female lead died. I can’t recall a more poignant movie in any film, even “Old Yeller” and I was slightly sorry that I had subjected myself to that grief. I was also glad it was dark in the cabin.

After bouts of sleeping and eating Chinese Oreo Wafer Sticks we made a right turn along our Pacific coast at Cape Mendocino just as the sun was coming up. It was a glorious display of sunrise colors, with Lassen Peak silhouetted against a broad brush streak of red, orange and blue. We were heading for an early arrival, nice for those departing in San Francisco, not so great for us as it meant an additional hour to kill while we waiting for our 3:40 PM departure to Albuquerque. In the end it didn’t matter because US Customs wasn’t open so we ended up sitting on the plane for an extra half hour. I guess they like to sleep in on the weekends.

After doing some rearranging we checked our bags in order to be free of them. We had a plan to kill the layover in some creative manner other than sitting around the Red Carpet Lounge. Today we planned to ride the BART into the city to have a look around. Of course we had no idea where to go being foreigners and all so we bought tickets to the Embarcadero station figuring it was as good a choice as any. And besides I had a faint recollection of it being a cool destination in spite of the fact that the station agent behind the bullet-proof glass told us it was a 30 minute walk from “everywhere.” Unperturbed, the train came and we left, still wondering if the $32 it was going to cost us was worth the gain. The price alone was quite a shock given that we’d spent no more than 80 cents on the most expensive subway ride in China the week before.

The train turned out to be even more of a surprise. It was slow, dirty and unappealing in every way. We’d been riding glistening spaceships at 250 MPH through the countryside, now we were on a dingy barge chugging through stinky tunnels and waiting just north of Daly City while a crew cleared the tracks of what (judging by the smell) turned out to be a flattened skunk. I know the system is old, and the ones I’d been riding were new, but I couldn’t help feeling second class in comparison and wondered if this was just an example of how far our wonderful country had slid.

We emerged at Embarcadero in front of a closed Starbucks. There was another one across the street that was open so we went and bought coffee and a maple scone for an energy boost. It got me thinking about the Starbucks strategy of building competing stores within eyesight of each other rather than losing a sale to a competitor. Sitting in a window nook next to a German couple with a map spread out on their table, we watched a steady stream of hiking tourists, jogging zealots and hipsters on single-speed bikes. The best in class might have been the relatively normal looking woman picking up half-smoked cigarettes and putting them in her pocket. It was only 9 AM and we were freezing, no doubt due to transoceanic exhaustion, but the relative lack of dress for most of the people was surprising.

Coffee finished we strolled down to the ferry docks admiring the homeless passing their morning wrapped up in cardboard and sleeping in the doorway to the Peet’s coffee shop. Another thing we’d not seen in a long time, and certainly not in any of the cities we’d just left. A hippie street fair was setting up, entertained by a very capable trio playing be-bop. The public toilets were all out of service and judging from the smell unusable even if they were working. We strolled around, caught a little sunshine and headed back to the station. On the way downstairs the urine smell was almost unbearable and judging from the stains on the walls, a regular feature. In all the stations and underpasses I’ve walked through in every major city in China, I’ve never been subjected to such a stench. There is something to be said for a decent system of public toilets I guess.

I decided to try and figure out how to recharge our BART cards rather than buying new. Of course I could have simply opted for two $10 tickets and made an $8 donation to the system. While they might have dedicated it to cleaning the walls, I wanted to make use of the $1.90 that remained on both tickets as a matter of principle. I finally did after a couple of false starts and was amazed that the default simply put another $20 on your card which you could then reduce in $1 or 5¢ increments. Trust me when I tell you that it takes almost forever to reduce $21.90 to $8.10 using only those two denominations. Once done we were back on the train and home at the airport in less time than it took to solve the ticket challenge.

The rest of the afternoon was spent dozing and eating Pepperidge Farm cookies in the lounge. I have to say that I wish I’d explored the BART option on any of my long layovers in the past. When I began traveling to China, there was a 12:40 flight that left which meant only a few hours of wasted time and in some cases a mad dash to catch it. Then it was rescheduled to 1:40 and finally to 3:40, both of which meant countless hours trying to stay awake. While it’s relatively easy to get in and out of Albuquerque, sometimes you do pay the price due to a lack of flights. On many occasions I considered catching a ride on a different airline or going home through another city. But both of those options meant changing planes and multiple flights and any time you add complexity to your itinerary it means the odds of a problem increase. So rather than an unplanned night in Phoenix or Denver, I simply wasted time sitting around eating and watching the clock. Today was no different.

Eventually though our time rolled up and we were on the Barbie Jet for the last leg. Our fair city was being treated to 50 MPH winds and blowing dust so our landing was a bit rocky. We gathered our bags and got in the car and paid our parking tab. The gal collecting the fee asked where we were coming from and told us that we held the record for the day.

When I was a kid I used to go to Florida every year with my dad. The thing that struck me then and has continued across the years and the miles is how different everything seems when you return from being away. On those trips, it would seem like I’d left in the winter and returned to a leafy spring. It was like that today, driving down the road to our village the Cottonwoods were beginning to green up and the Elms were covered in their insidious crop of tiny lime colored seed pods. Turning onto our road, you could see the results of the wind – tiny branches and leaves littered the road surface. We pulled into our drive and let out our old dog Teddy who about turned himself inside out with convulsive doggy joy. There are few things better in life than a dog that’s happy to see you. Out back the horses were staring at the house, wondering if we would be dumb enough to throw them a second dinner. As good as it is to see the world; it’s always great to get back home. 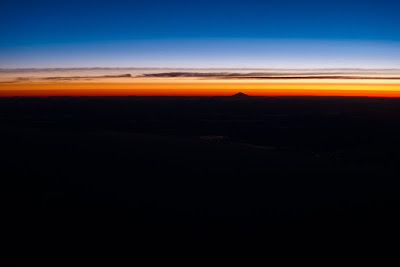