We began our first day in Valencia by sleeping in late. There is nothing like being up for 24 hours and crossing 8 time zones to make you want to spend an extra hour or so resetting your biological clock. And it means skipping the first meal of the day and moving straight to lunch. Before that though we headed down a few blocks to the local market to stock up on some food for our apartment. Deciding not to stay in hotels opened up opportunities to have lighter meals and snacks on hand and with that in mind we went shopping.

I suppose we all love the packaged ease of our giant supermarkets, but shopping in a big fresh food market just seems so much nicer. Stopping and choosing and conversing and paying at dozens of different shops is not nearly so convenient, but once you get past that small cost in time, and the fact that it’s almost impossible to know where to start, the experience is transcendent. Assuming you can use that word for something as basic as collecting food.

Built in 1914, the Mercado Central is a vast collection of meat, fish, vegetable and fruit markets collected inside a big iron and glass belle arts building just to the side of the Barrio Carmen. It’s open from 8 until 3 daily, so you need to plan your shopping excursion accordingly. After doing a bit of scoping, we settled on a fruit shop and bought strawberries, local blood oranges and a mandarin orange for the walk. Our next stop was the Maison d’ Queso for a half kilo block of English cheddar and then on to the panaderia for a baguette. Sufficiently loaded, we headed back in the direction home, but stopped for a quick horchata at a juice stand outside. Horchata is very popular here in Valencia, with some shops claiming continuous service for more than 200 years. It’s made from chufa (tigernuts in the US), sugar and water and looks like milk but has a mild melon taste. Horchaterias are common along the streets where people stop and sit at a table and enjoy a drink along with sweet pastries. It’s a great way to spend an hour relaxing and watching the world go by. We polished that off, dropped off our groceries at the apartment and headed back out for a tour of the Barrio.

Lunch was first on the agenda and we stopped at a small restaurant with outside tables for a “bocadillo”, the famous local sandwich. The variety of these little meals is limited only by the imagination of the chef and today we chose Iberian ham (jamón), pork loin (lomo) and serrano chile. Served on a baguette with a cup of thick, Spanish coffee it was the perfect fuel for the rest of the day. While we ate an American expat sitting nearby loudly carried on with his Spanish friend about the religious, professional, personal and cultural behaviors of Americans. Speaking mostly in English, I doubt any of the subtleties of his ideas managed to sink in for his friend.

One of the things that always amazes me is just how small Europe is. You take a look at a map, make plans around taxis and the Metro and then realize with a bit of walking that all the sights you’re interested in are within ten blocks of each other. The better part of our morning was spent wandering the narrow streets, taking in the sights and lots of pictures. We found ourselves at one of the original gates to the city – the Torres Quart – and saw a sign for the botanical garden. It had been on our list for a later day but we figured we were close so why not. We continued down Calle Quart, stopping to give some spare change to a man playing Besame Mucho on an amplified electric violin before realizing we’d somehow missed the garden. Of course we’d expected a long walk and had gone right past it within the first block past the city gate. We found the entrance and after a confusing discussion about the ticket price – 4 vs. 40 Euro – we went in and wandered around. It was a wonderful place, serenaded by the calls of Collared Doves and entertained by the antics of Blackbirds trying to avoid a healthy population of feral cats. An English gentleman from Cheshire stopped to tell us that he felt the price of his entry was the best Euro he’d spent. He was down here on a tour with an opera club and was spending the day wandering around. It turned out that he’d been to Sonora so we had a brief conversation about cacti, something that this garden had an excellent collection of.

By midday we’d covered most of the churches and relics of the quarter, including a wonderful little mural above the gate to the original Arab Quarter. Beyond it, one section of the original city wall was incorporated into the corner of a building, left uncovered by the ochre plaster used on the remainder of the walls. From there we headed back towards our home base and beyond to the Plaza de la Reina for another stop for horchata. A tile mosaic of a woman stirring the horchata pot graced the front of this building and My Lovely Wife asked the waiter if it depicted his grandmother. He said “no” and knocked on the window to produce the woman in the tiles – his mother who greeted and welcomed us to the restaurant.

After our break we took a street into a fancier part of town, looking for another local market. These neighborhoods featured many chic boutiques including one dedicated to chocolate, a stop for another day. Passing through a small park, we stopped to take some photos of a giant Ficus tree, as big as a Redwood at the base, albeit with a trunk composed of many separate trees. From there we visited the Mercado Colon which has been reborn and filled with a half dozen coffee bars and restaurants.

It was now late afternoon and we decided to head back along the Jardín de Rio Túria, a long greenbelt park that used to be the bed of Valencia’s main river. Getting tired of being flooded, the city fathers moved the river elsewhere and the bed became a pedestrian thoroughfare with shaded walks, a bike lane, sports fields and gardens. Lined by busy streets on both sides but below grade, it’s a great place to escape the noise and the bustle. We used it to make our way to the Museo Belle Arts, the second most (after Madrid’s Prado) famous art museum in Spain. It turned out to be a wonderful place with the finest collection of religious retablos I’ve seen. Beautiful altar pieces from the 14th to 17th centuries, painted by masters and framed in gilded carved wood. The rest of the collection spanned the ages from the Roman period to the modern day and was quite impressive. Done there, we walked home in the rain for break before dinner.

One of the things about Spain that never fails to make me feel provincial is their late evening culture. I remember us sitting in restaurants alone in Barcelona, eating at 7 PM and feeling like a hick because the real action doesn’t start until much later. It’s just not the way we do it in the US, dinner at 10 and beyond just seems so late. On this trip though we resolved to try and fit in better and so we waited until 9 to go searching for food. Tonight we figured it was time to start our quest for the perfect paella since Valencia is home to that special dish.

Emilia, the woman who owns our apartment, educated us on the true meaning of paella when we arrived on Tuesday. The dish to most of us means seafood, shellfish and rice. But it turns out that those ingredients are not quite right. A true Valenciana paella has no seafood at all. Its chief constituents are rice, white beans, long green beans, snails, rabbit and chicken. And after picking a restaurant we had seen the day before, that’s what we’d settled on. It turned out to be spectacular. Served hot at the table in a big steel pan and coupled with a glass of Spanish tempranillo wine, our dinner was precisely what we wanted after a long day walking around. The flavors were just wonderful and nothing about the meal could have been improved upon. It was so good that we decided to forego desert so as to not ruin the taste. After a cup of strong coffee we wandered down lanes and back to our place, content in a day well spent. 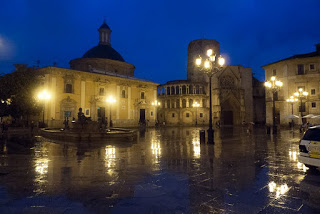