When I look back on all the trips we’ve taken over the years, one thing stands out – we have had very good luck with weather. Aside from a rainy day last year in Madrid, I can’t think of another instance of losing time wandering around due to the weather. Lately though, our luck has changed and starting with Paris, we seem to be drawing the short straw when it comes to the climate.
It started raining in the middle of the night, thus confirming the forecast I’d read yesterday. They called it moderate rain with totals of about one inch. One inch? At home we’d be knee deep in mud and moderate would be the last word I’d be muttering under my breath. But such as it was, we had breakfast, and went out to try and solve our ticket problem.
A month or two ago I got motivated and ordered tickets from Ticketmaster.es for the Alhambra in Granada figuring it was wise to get ahead of the well-publicized rush and assuming that they’d just mail them to me for printing out like Renfe, the train company does. Well, no, they sent me instructions, in Spanish, on the various ways I could collect them here. Supposedly there are kiosks everywhere who’s location is known to everyone but not to the Ticketmaster web site. There was another option – collecting them at an authorized office of which there are many here in Sevilla. In fact, I saw a Carrefour Viajes office in the train station when we arrived on Tuesday and planned to check when we returned from Jerez yesterday knowing that its convenient location was just too good to be true. I practiced my speech for at least 24 hours before heading in there and offering it up, “Yo compré billetes para la Alhambra de Ticketmaster and me dijeron que es possible recogerlos aquí.” The attractive young woman smiled and listened politely before telling me that her office was a Corte Ingles Viajes and not Carrefour and thus not an authorized ticket dispenser. She did offer to give us instructions, we politely declined lacking a car to drive there and still surprised from going to the wrong place. The second option, the FNAC media store, was close to our apartment so we adjusted our plan and headed there this morning.
It had mostly stopped raining when we got out there so the tons of tourists wearing neon transparent garbage bag raincoats were an unexpected shock to the eyes. I went up to the information desk just inside the door and offered my soliloquy a second time. This time the cute young woman behind the desk shot back (politely) in rapid fire Spanish that Alhambra tickets can only be claimed at the Alhambra. It was lucky that MLW was with me because she caught the burden of the translation, I was too stunned to respond. We thanked her and went across the street to Starbucks to recover some of our North Americaness, a plan that was also dashed when I ordered a chocolate croissant by that name and was greeted with a blank stare. At least in this case I was able to recover, which opened the door to a brief conversation with the barista about how that same product is “pain au chocolat” in France, “croissant” in the US and a “napolitano” here in Spain. Today was going to be a day of cultural reckoning.
While we ate and drank the rain picked up again and so we decided to brave it for the moderate walk down to the Museo Arqeológico located at the far end of Parque Maria Luisa. Having wisely decided to leave my map at the apartment, we were operating mostly on memory and approximation by asking for directions at kiosks along the way. MLW stopped to ask a soldier doing gate duty at some imposing government building and received directions worthy of a video had I had the presence of mind to get my camera out. He effectively pantomimed the entire journey with expansive gestures and I had a great time standing in the parking lot just watching it. We thanked him walked away only to hear some yelling and to be told by a group of young men walking by that the soldier back there wanted us. He produced a map and showed us the way a second time, insisting that we take the map with us. Another round of thanks and we were once again on our way.
Eventually we found it, more or less where we thought it would be and as a museum is was, interesting. We decided to start on the bottom floor as it contained the paleologic and pre-Roman collections, the stuff I wanted to see. We paid and headed to the down stairwell, holding our breath while passing the rest rooms that seemed to be suffering from some sort of plumbing back up. The bottom landing was dark, and there were plywood barriers preventing entry – closed – so we went back up and asked the ticket agent and she agrees that the lower floor was indeed closed. I wondered why that tidbit had escaped the lengthy description of the museum she’d offered when I paid.
The rest of the place was chock full of Roman antiquities from many of the local ruins, including Italica which we had visited last year. It made me think how cool it would be to live in a place where marble heads, bronze coins and bone sewing needles would pop up every time you dug a hole to plant a shrub. In other words, living somewhere sitting on top of 2000 years of civilization. It was a nice collection, perhaps worthy of being improved but still a fun place to wander around on a rainy day.

Leaving, we got sort of fooled by the problem of boulevards diverging from traffic circles on the way home and wandered a bit afield before introducing a course correction and heading back into the barrio from the far side. Back home for a nice lunch of bread and cheese and paté and a bit of a rest while my previously waterproofed shoes dried out.

Last night we sat and had drinks at a tapas bar called La Sacrista, along Calle Mateo Gago, the street of our other favorites. After waiting until it got dark, we decided to go back and give them some more money, this time for drinks and food. The rain had not changed much since we came in earlier and so negotiating the narrow lanes with umbrellas was once again a challenge, albeit one that caused friendly chuckles from other pedestrians when we tried to judge who was going to raise theirs higher to allow safe passage. It’s interesting here when it’s raining – most of the restaurants that have barely begun filling by 8:15 are now full. I guess there is no point in a promenade and trying to avoid being the first person in a place when it’s cold and wet. We started at a table on the covered patio and moved to a smaller one inside to get away from a loud table of drunken men before settling at a bigger table along the wall of the bar. Beer, wine, fried calamari, a nice stuffed zucchini with a snap to it and a threesome of ham croquettes proved to be the perfect dinner. I paid and when my change came back it lacked sufficient diversity to make a good tip so I went back to the bar. The waiter there changed my 5 and promptly dropped the coins in a dish pan full of glasses. Coins and dishwater, the first time my change has been washed before being returned.
We walked around the back of the cathedral to the Horno de San Buenaventura, a pasteleria that is the one place in all of Spain where you can get a special spice cookie, the Polvaron Giralda, associated with the church across the street. Of course we took away more than one of those, supplementing our historic selection with a half-dozen other cookies covered in chocolate. I stopped to take a few photos of people strolling the rain before heading back home.
A few words about our apartment.
Last year’s place was deficient in many ways so we decided to try a new one and ended up connecting with a wonderful woman named Macarena who worked for an agency that manages a lot of properties in the old city. There were a couple in this building, on the edge of the old Juderia and across the street from one of the taperias we ate at a couple of times last year. It’s in a 16th century building and newly renovated. The main floor has a small living room and kitchen with a half bath. The second floor a nice bedroom and full bath. Both the living and bed rooms overlook an air shaft that was really more of an open atrium. The best part – clean air as no kitchen opened onto it and we never had to enjoy the aromas from the dinners of the other tenants. From our upstairs you can see the morning sun illuminating a beautiful tile room. But the best thing is a flowering orange tree and the birds –  the people across from us have five cages of small songbirds that sing all day long, starting just before dawn. And the smell of the just blooming orange blossoms makes the scene perfect. It’s a wonderful place and a genuine improvement on our previous experience. 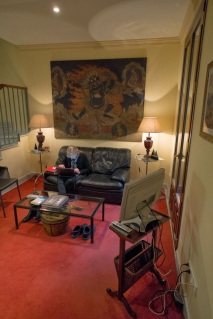 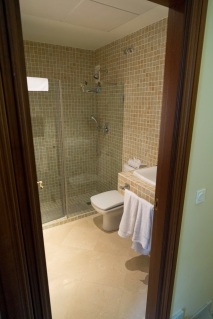 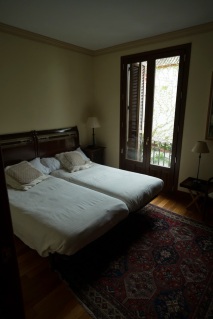 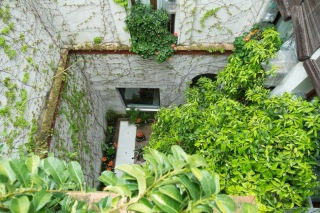