Last fall I decided to get a tattoo – not so much to express my individuality (as just about every other person has now done) but more to have the experience of getting needled as well as to see how having a permanent piece of portable art would make me feel.
The problem was what to get. Tattoo shops are loaded with catalogs of both standard drawings and freelance work. The breadth of options is staggering if you only want something canned. My thoughts went in the other direction – I wanted something that meant something to me, characteristic of my life experience. So I thought about meaningful statements, written in Sanskrit or some other obscure language, or maybe something to do with a bicycle. Or maybe something Chinese. Or who knows, the only thing I did know was that I didn’t want a giant orange Japanese Koi wrapping around my biceps.
One day it came to me. While wandering around Sevilla last year, we saw the same logo over and over, on anything that had to do with the municipal government and factored into displays all over the city. 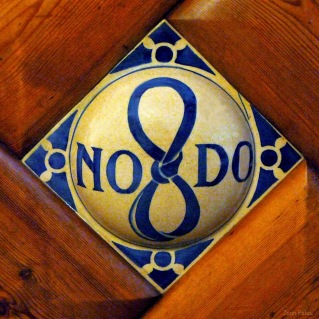 It’s a “rebus,” a structure that uses a picture to convey words, and commonly found in heraldic representations of names and places. Things like using the drawing of three fish to represent the name Salmon. In this case, it’s used to tell a bit of Sevillan history where, according to legend, the city´s logo originated in the 13th-century coat of arms awarded to Sevilla by King Alfonso X the Wise. King Alfonso X was one of the great heroes of the Reconquista, the seven century long battle by Spanish Christians to reclaim their homeland from the Moors. The Reconquista was not as simple or straightforward as we may have learned in school – it was a time of shifting alliances, treachery and deceit. And while the Christian leaders may have had the noble goal in mind, it wasn’t uncommon to make deals with the enemy if it meant furthering their personal goals. Just like Game of Thrones.
Alfonso’s first born died in battle, leaving him with two young sons the oldest of which, Sancho IV of Castile, claimed his rights as heir. Alfonso would have preferred to leave the throne to a grandson based on some convoluted notion of genealogy, but Sancho had strong support within Alfonso’s court. As would be expected, this led to civil war which ultimately ended with Alfonso’s acceptance of Sancho. Only three cities stood with Alfonso – Murcia, Badajoz and Sevilla – not enough to carry the day considering the alliance between the nobility, Sancho and the enemy Moors. Even Alfonso’s deal with the Sultan of Morocco could not overcome the power of his enemies.
Alfonso is reported to have said “No me ha dejado,” – she has not abandoned me – referring to Sevilla’s support. And from that, the rebus was formed into a coat of arms.
It goes like this: the 8 in the middle of the phrase is a “madeja,” Spanish for a skein of wool and representing Sevilla’s preeminence in the middle ages as a place for the production of wool and fabrics. “NO” simply means no, and the “DO” is added to madeja to close the loop. The completed form actually translates as “no madeja do” dropping the “ha”, but it’s said that in the rapid fire Sevillan dialect, you wouldn’t hear it anyway. She has not abandoned me – a reward to the people of Sevilla for their loyalty.
I liked it for a couple of reasons. First of all, she has not abandoned me, speaks to MLW’s persistence in dealing with my personal set of peculiarities over these years together; a nice sentiment. Secondly, I love Sevilla. It’s one of the most agreeable, enjoyable and wonderful places I’ve had the pleasure of visiting. If a move to Spain was on my horizon, Sevilla would be where I would go. The food, the culture, the people, and the day to day rhythm – all perfect for me. Lastly, I think it’s a nice graphic – different than most, interesting to the eye and one not requiring more than an hour in the tattoo chair.
And so it went, I had it done, the months went by and we headed off to Spain where we decided to create a photographic record of as many NO8DOs as we could find. Interestingly, the tattoo didn’t attract a lot of attention although the weather more or less meant long-sleeves pretty much every day. I was asked about it one night in l’Oca Giuliva, an Italian restaurant we visited twice due to the excellent food and nice staff. The headwaiter asked about it and I told him the story. He liked it.
Click on photo to see an enlarged view 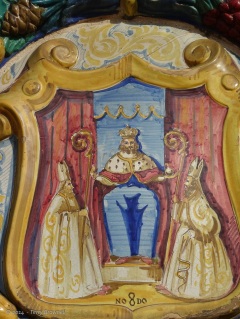 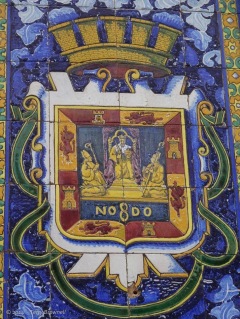 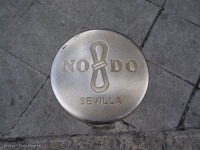 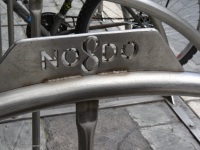 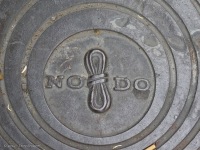 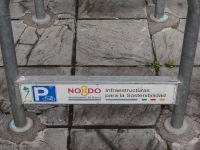 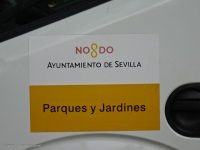 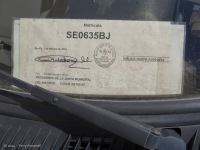 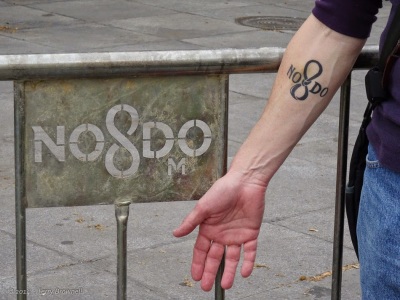