Skip to content
Date: April 4, 2015Author: tbaroundtheworld 0 Comments
We went back out to partially cloudy skies and I even felt a couple of drops of rain. After wandering around the barrio trying to find a certain tile place we went back over to Mateo Gagos to find a restaurant that I had checked out the day before. I was having a hankering for carrillada, pork cheeks slow cooked in tomatoes and herbs. We found the place and went in and were promptly ignored by the only waiter who seemed to be doing anything. He had chosen instead to wait on a bigger table of locals who had come in after us. While sitting there I thought we might as well get a menu so I went up to the bar and asked the gal for one in English. She shook her head and said, “No” which I found interesting since I’d just read it right outside her door. I asked if the outside one was the only version and she got pretty annoyed with me and responded, “No, no, no” and something that more or less sounded like “you’re not listening to me, you can’t have it because we don’t start serving for 15 minutes.” Okay, fine, we got up and left.
The next place down the street had that dish also so we took a table and had one of the best meals we’ve had on this trip. Carrillada – big chunks of incredibly tender pork served in a mild but flavorful tomato based sauce. We added a tapa of cold tomatoes in a bit of olive oil dressed with two long spears of fresh tuna. Very, very nice and served up by a friendly staff.
In the course of going and coming to the restaurant, we passed two more processions, each headed in the opposite direction. By some trick of luck we managed to get very close to the palios without being crushed. Once the second one had passed we did an about face and walked off down Constitución to a gelato place we’d see the day before. We had a nice conversation with the fellow working the counter about the difference between ice cream, helado (Spanish for ice cream) and gelato. He was contending that it was merely a matter of linguistics, we took the position that it was linguistics and ingredients. No matter, it was tasty. We worked on our cups as we took a stroll down to the park.

Normally horse carriages are all over the old town, but due to Semana Santa, they’ve been relegated this week to the square close to the Plaza de España. Honestly, there is no way that they would survive the crush of people and all the noise. They stood there earnestly waiting to work when it was clear that they should be home in the barn having dinner. We grabbed a spot on a bench and people-watched for a bit, including one of those street performers that strike a pose and hold it for what seems like forever. This young man, covered from head to toe in silver paint, was portraying a tennis player and he was extraordinary, assuming some very challenging positions and maintaining an absolutely still posture. It made me appreciate just how imbalanced I am when executing a Tree Pose in Yoga. 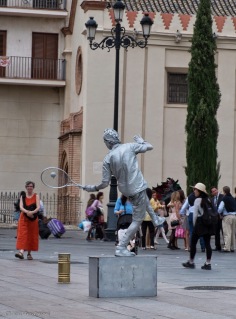 The evening was balmy and really quite pleasant after how much we’d been baking during the days. We spent a long time on the bench at the end of the street enjoying the evening, the people passing by and the Swifts screeching overhead in small, wheeling squadrons. It’s clear to see how the tradition of the paseo originated in these warm Mediterranean countries. Work for a while, rest for a while and then head outside for a walk in the cool evening breeze.

The trip home was unexceptional, choosing to take the boulevard along the river and then to cut back through Arenal towards the backside of the main church. There were still lots and lots of people in the streets and another palio queued up behind the cathedral. Returning the way we’d come out earlier, the then empty restaurants were now all full. We turned the corner by the Santa Theresa restaurant and headed up our little lane.