Skip to content
Date: April 14, 2015Author: tbaroundtheworld 0 Comments
Today was tagged a recovery day after the rigors of yesterday’s travel. We decided that we would visit the Museo Arqeológico Nacional for a change of pace. Rather than experiencing history in situ, we thought it might be different to visit a collection of it. And as it turned out, we’re very glad we did.
Stopping for coffee at a Starbucks on Alcala, we took a window seat and spent some time assessing passersby as tourists or locals. From there it was a downhill stroll to the Paseo del Prado, stopping along the way to watch a drama unfold in the very busy intersection in front of the Metropolis Building.
Two women were frantically trying to stop traffic, but we couldn’t figure out why. They had their faces in the driver’s side window of a red compact car that suddenly started to roll into the oncoming traffic. A motorcyclist jumped off his bike, swung open the door of the rolling car and tried to steer it out of the oncoming cars. But he couldn’t turn the wheel and the car continued, crushing the guy between it and a car stopped at the light. The rolling car finally crashed into the front of another car, bringing it to a stop, with the motorcyclist trapped between the two. Some pedestrians ran over and dragged the motorcyclist out from between the two and suddenly there was a policewoman on the scene. The motorcyclist was walking around, clearly dazed and probably hurt but not too seriously has he was able to remain upright. There seemed to be another man sitting on the ground by the crashed car, perhaps the original driver. As far as we could figure, the driver must have passed out behind the wheel and the women were trying to get help. Thankfully no one seemed seriously injured.
We came to the building that (my loyal friend) Google Maps had identified as the Museo, and after climbing about a thousand steps and asking, we found out it was actually the National Library. The Museo was around the backside of the building. Back down the steps and around the block and we found the entrance.
What a museum, probably the best representation of this kind of material we have ever seen. I’ll admit I’m sorry I had not visited before. The first floor was dedicated to the emergence of hominids through the beginning of the Iron Age. The displays ranged from skulls and skeletons to tools and pottery and on to more complex tools, tapestries and of course weapons. Each era was accompanied by a very thorough yet accessible video representation of the significant events. The displays and information were so captivating that we didn’t take a single photo. Australopithecus through early Hominids through Neanderthals up to Homo Sapiens, the entirety of evolving humanity represented in tools and art. Just incredible. We spent more than two hours poring over the material.
Moving upstairs we spent far less time than we should have visiting the ancient era from the Celtiberians to the Phoenicians, Carthaginians, Romans, Visigoths and finally the Moors. If we hadn’t nearly spent all our energy getting through the Ice Age, we would have had at least as daunting a task of absorbing this material. We focused mostly on the ancient Spanish and Celts, because it was so well represented and it filled a gap in our understanding of the local, pre-Roman history. Wonderful sculptures, a lot of horse related artefacts and even another pair of Verraco, statues similar to those we saw yesterday in Ávila. I learned an awful lot about the period, and I was glad to have had the opportunity to see such a good collection from this era.
The Moors were not quite as well represented, although there was a very nice model and depiction of the Mezquita in Cordoba including a hanging ceiling, demonstrating the construction and architectural flourishes. Beyond that, a bit on the Visigoths and some truly exceptional Roman mosaics. All a feast for the eyes.
Checking the time we saw that we’d spent a full 4 hours getting educated so we left but not before telling the guy working at the information desk that we thought it was one of the best ever. A really unexpected treat. 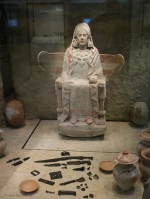 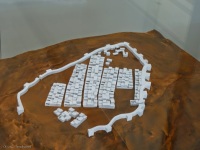