Skip to content
Date: April 17, 2015Author: tbaroundtheworld 0 Comments
Prehistoric Man had one thing on all of us – he never experienced Jet Lag. And of course that’s also true for Bronze Age Man, Iron Age Man, Roman Era Man, Medieval Man, Renaissance Man and all of humanity up until Alcock & Brown decided to fly from Newfoundland to Ireland in June of 1919. Sir Charles Kingsford Smith kept the ball rolling with the first Trans-Pacific flight in May of 1928, and since that time it’s all been downhill although I suspect that those early flights were so slow and so tense that no one thought much about how they felt the morning after their arrival. Prior to the first mention of the term by a columnist by the name of Horace Sutton in a February, 1966 article in the Los Angeles Times, no one had any  name for it. Jet travel was not yet 15 years old when the phrase was coined and I suspect people had an idea about what was afflicting them, even if they didn’t know what to call it.
Well I know a lot about it, knowledge gained painfully over these last 10 years of jumping over the big ponds. Going to Asia was never that bad, coming home was miserable – the effect lasted for so long that at one point I considered giving up on trips home that lasted less than two weeks. Going and coming from Europe is less sickening, but not completely without a cost. Particularly on that travel day home when you stay up for 24 hours (less what sleep you might catch on the plane) and then go to bed at your regular home-time. You wake up at midnight, and every hour thereafter until 4 when you really just want to get up and get going despite the fact that it’s pitch black outside and the world hasn’t started yet.
So you try to lie in bed until a more reasonable hour when you do your chores and eat breakfast, all the while dreaming about that 10:30 AM nap. And that’s where we are today.
The ride home was pretty nice once we cleared the clouds hugging the mid-Atlantic. While the polite thing to do is to keep your window shades down, I sneak a peek every once in a while and yesterday was good day for that. Bright late spring sunshine pouring down on a vast expanse of sea ice, spread as far to the north as I could see. Coming in across Labrador and Newfoundland, the land was clearing up but the harbors were all still choked with bright white ice. We crossed somewhere into New England and flew straight across Quabbin Reservoir, one of my old favorite places in Massachusetts. Google Earth makes this kind of high altitude sightseeing possible – I love to take photos and come home and compare them against the satellite shots. It imparts a nicely detailed relationship with the physical world.
Our trip was pretty great, we visited some new places, and devoted time to some old favorites, all the while bathing in the history the place and how as Spain evolved, our little corner of the world did too. We averaged about 15,000 steps and close to 7 miles of walking each day, data points that our knees will certainly attest too. Particularly those steps taken on slick wet cobblestones. It was a wonderful time, and like every trip before, we start talking about what we’re going to do next year.
But for now it’s back to horses and gardens and home construction and all those things that make the rest of the year pretty great too. 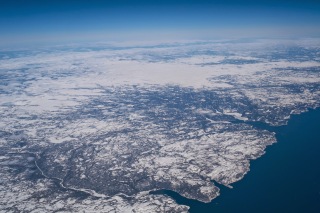