Skip to content
Date: April 3, 2016Author: tbaroundtheworld 0 Comments
We prefer the Frommer’s Day by Day travel series over every other equivalent series. Not only do you get a nice little map in a cool plastic pocket, but the books always have a chapter dedicated to walking tours that aren’t too long and cover a bunch of interesting things. Today, since we’re living in the Barri Gòtic we decided to do that walk. But first – coffee.
Except today being Sunday, our little shop nearby was shuttered. I’m always disappointed when the management of a place I like decides to give their employees a break, and today was no different. Pulling ourselves together, we went off towards La Rambla where we found another place with a decent pain au xocholat and good coffee. It wasn’t the same, but it did the trick.
Heading back the starting point of our adventure in front of the cathedral, we stopped to watch a big circle of people doing a famous Catalan dance. Everyone piles their belongings in the center and then they form a ring, bobbing to the music which today was provided by a decent sized band sitting on the cathedral stairs. 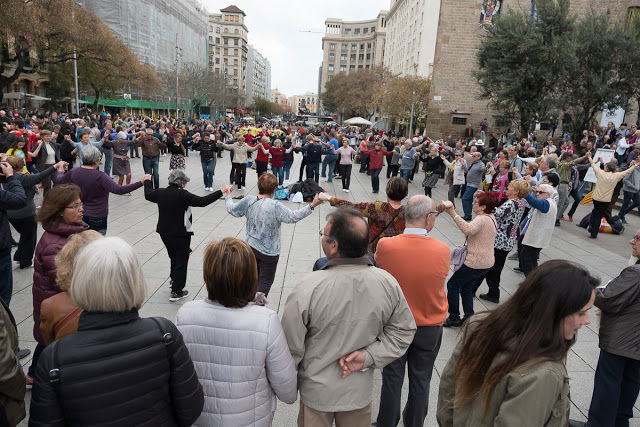 From there it was off into the warren of streets, past the best remnants of the original Roman walls and up a street that led to supposedly what was the most beautiful square in Barcelona. It wasn’t. Perhaps the most austere, but not the most beautiful. Three original columns from the Temple of Augustus were located in a little alcove off to the side, and I remembered  them from our last visit. 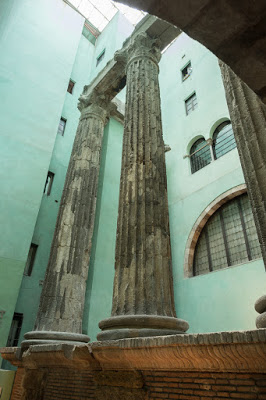 Next on to the square in front of the Catalonian government building and then down into the Jewish Call, the original ghetto from the 12thcentury, with some even older elements. Back and forth we went on these little narrow lanes taking time to photograph gargoyles and people-watch.
(click to enlarge)

We stepped into a small square in front of the Cathedral of St. Philip Neri (figuring we had to since that’s the fancy church in our old town at home) and stuck our heads inside the door to grab a peak at the supposedly magnificent Baroque chapel. It was, but there were services going on so no pictures out of respect. Out front, the book informed us that the pock marks on the front of the church were caused by a gun and bomb battle in 1938 during the Spanish Civil War. A sobering thought here in such a peaceful spot. 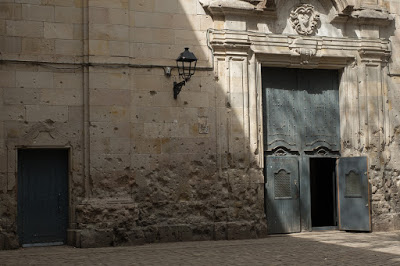 Conveniently, the tour ended right in front of our apartment so we took a break for lunch.
Re-energized and using the 1€ map I bought at the tourist office we went back out as the sun was just beginning to dip below the buildings. The goal this time was a Roman cemetery that was not mentioned in any of our books but was certainly appealing to me. We found it quickly, in the middle of a nice little park far off the tourist beaten path but redolent of dirty people and urine. An old man sat on one of the benches drinking straight out of a box of cheap wine, and then it struck me why I hadn’t heard of this place – the guide books often sanitize their suggestions in order to avoid the wrath of more delicate travelers. We decided not to go down into the actual display itself- rather took a photo from the overlook and left in search of the next step on the Tour Romana, a few remaining sections of the original aqueduct. We found these easily in a small neighborhood park filled with families and kids playing on a climbing gym. There was a little boy at the base of the artifact, pounding the ground with a rock. 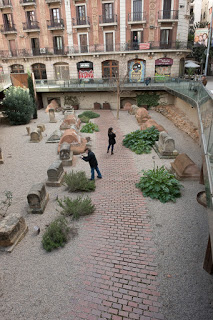 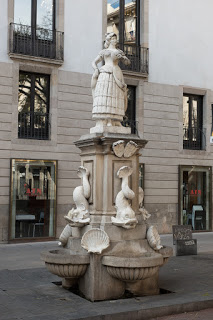 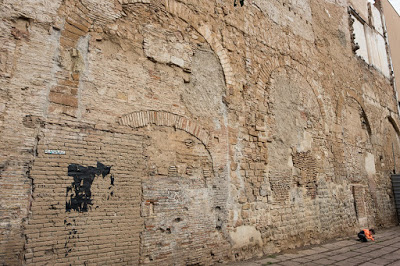 From there we decided to go looking for spot to sit and enjoy a glass of wine. We found it in the Plaça Reial at a nice restaurant with tables in the shade. We had a nice respite until a planeload of Frenchmen decided to sit down and light up. They had 2 cartons of Marlboros on the table, so clearly they were there for the long haul. Smoking is allowed in these outside venues, and we always pick carefully but you cannot guarantee who will show up before you’re done. Sometimes the gamble works, sometimes it doesn’t. 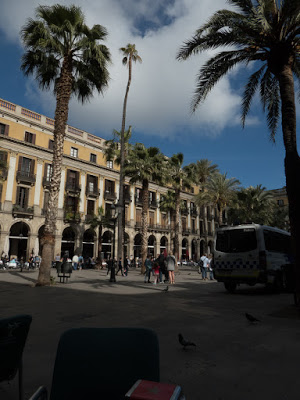 After taking a spin around the square to check out the other restaurants, we went back out onto La Rambla where we found the up until now missing street performers. On our past trip, they were right up in the center median, amid the shops and restaurants that line the street. Having not seen them this time, we were wondering what had happened. The median today still has the flower vendors and the occasional gelato store, but now the whole expanse is taken up by restaurants in white tents, with acres of outside seating. Either the city has decided that more money can be made in this way, or because we were here last in the dead of winter, it’s not clear why the performers were relegated to the shadow of the Columbus statue. But there they were. We took a few photos of the best of them and headed back home. 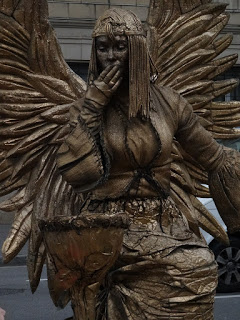 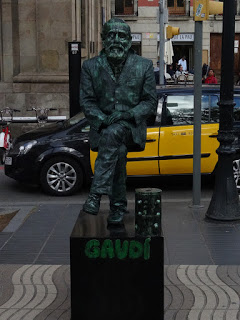