Skip to content
Date: April 6, 2016Author: tbaroundtheworld 0 Comments
There was no goal for today. After yesterday’s heavy immersion into museums, history and culture, today was dedicated to walking around and getting a feel for the place, something we really enjoy, and an opportunity to see things outside the normal tourism experience. While here in this part of the city you are never far from the sensory onslaught of tourism, there are places around the edges that are a bit more adapted to normal life and often a lot seedier. So after collecting the newspaper and getting coffee at our regular place (where they had our cups ready before we actually ordered,) we took off in search of the oldest synagogue in Spain.

The ancient Jewish quarter, known as The Call, is quite close to where we are staying – something I knew that didn’t register with me the other day when we took the Frommer neighborhood walk. Just a few streets over in fact. On that walk, the “sinagoga” was mentioned but its exact location was not clearly articulated. The book more or less said “here are some old walls that used to be part of it.” Or at least that’s what we came away with. Last night though I was looking through the sites in the two guides we have and I found an actual address for the place. We couldn’t let that go by so we went to find it and sure enough, it was there.

Two tiny vaulted rooms and an entrance that threatened to dent your forehead were about all that was left, half of it having been given over to a next door apartment building in 1678. The young woman selling tickets told me it was so small because it was not allowed to be bigger than the smallest church in the city. They had a nice collection of artifacts and the condition of the rooms was pretty nice for a place chartered in 1267 and seized by the Inquisition in 1487. Its history is littered with seizures and closings and abandonment – it’s wonder that anything was left for the renovation that began in 1996.
(click photos to enlarge)

Next stop was the Plaça George Orwell, dedicated to the author of “Animal Farm” and “Homage to Catalonia” for his service to the Republican side of the Spanish Civil War, including being seriously wounded. As the fortunes turned for his side, he was declared a wanted man and escaped to France just ahead of the Fascists. It’s also known as Plaça Tripi because of its alleged popularity with recreational drug users, and it’s very popular in the travel media to point out that the square named for the author of “1984” is thoroughly covered by surveillance cameras. During the war, it was bombed by Mussolini’s air force and 42 people were killed. The walls are still pock-marked from the shrapnel. There is a very strange sculpture in the square by Surrealist artist Leandre Cristòfol, installed in 1991, that is titled “The Monument.” It is purportedly a bigger version of a wooden piece from the 1930’s. 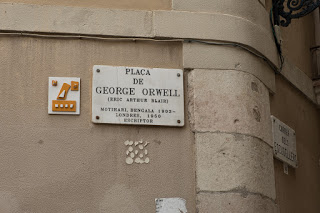 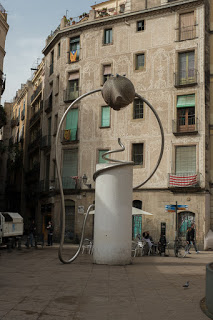 In 2009 MLW and I came from opposite sides of the world and met here in the middle. We were only here for a few days, and we did a lot of walking around. I remember some things about the places we went and saw, but not about a lot of the details. So this morning, acting on a few clues from my 2009 photos, we went on sort of a treasure hunt with two particular sites in mind – a small street that inclines up from La Rambla and a fountain in a square featuring 3 faces. We found them both and took two of the same photos that we took back then. Some things had changed, but mostly they remained the same.

Looping around the backside of the cathedral, we spent some time taking photos of gargoyles. Today they were perfectly illuminated and set against a pale blue sky, conditions we’d not had before. Looking at them you have to wonder what scared mind came up with such horrible beasts and people in torment. On the plus side, taking photos straight up into the air is the only time you don’t have to wait for some group of tourists to get out of your picture. 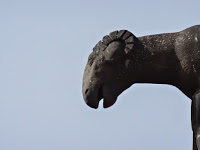 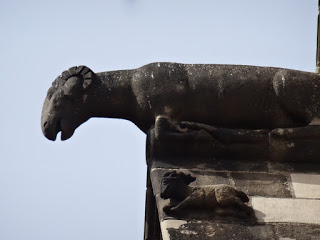 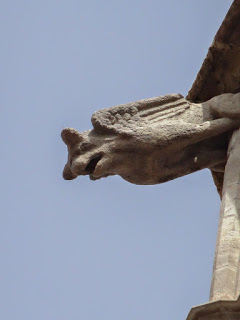 After a nice lunch at a small sandwich place on La Rambla (the guy actually took our can of Coke, poured it in a big beer stein filled with ice and added two straws) we went up into the district towards the northeast of our apartment. Outside the cultural relic district, this place was what I was describing earlier – darker, dirtier, less active, far quieter. We wandered down a long lane that arcs around the top of the Barri Gòtic, stopping to admire a quiet, tree-shaded courtyard in front of a parish church, Santa Anna. One of the oldest in the city, it was started in 1141 and expanded in the 15th century to include a convent dedicated to Santa Eulàlia.
El Palau de la Musica Catalana sits just inside the western edge of the La Ribera district. Built between 1905 and 1908 by architect Lluís Domènech i Montaner it typifies the Catalan Modernism style so famous here in Barcelona. It’s so incredibly over the top visually that it makes most of Gaudi’s work seem austere by comparison. It’s also very difficult to photograph, being on a narrow street and multiple stories tall. We did the best we could before moving on. 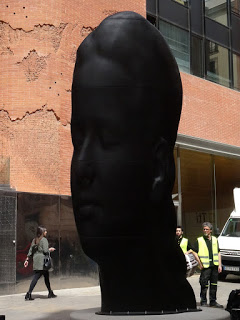 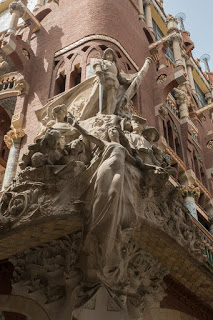 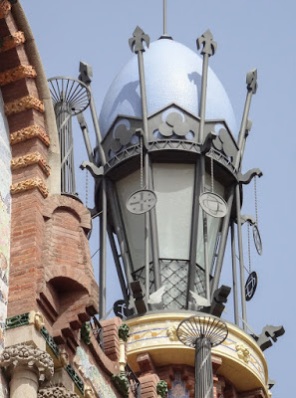 From there it was just a long walk back through many of the same La Ribera streets we’d covered yesterday. The difference today was much nicer weather. After a quick gelato stop, it was home for our daily siesta.