Skip to content
Date: March 22, 2017Author: tbaroundtheworld 0 Comments
After resting a bit and gathering what was left of our energy we went looking for dinner. Much like Sevilla, the neighborhood we’re in has dozens of tiny restaurants up and down the narrow streets. We opted for easy, having read a couple of menus we chose a place only a few doors down from out apartment. We wavered between inside and outside and opted for the former because just like Spain, the outside seating is not smoke-free. This being our first time in Roma, we went with tradition – MLW had Spaghetti Pomodori and I had Penne Arrabiata. Boy, were we unprepared for such a fantastic yet simple feast. The pastas were great and sauces even better. Coupled with a glass each of the house red house white, we were in culinary heaven. Walking home, it looks like the dining behavior is the same as the other big European cities – the dining crowd really picks up as the night wears on. One interesting little hole in the wall, perhaps holding 8 tables, was empty at 7 and 15 waiting people deep outside the second time we went by.
Meeting out breakfast needs was the one last chore of the day, and lucky for us there is a Carrefour Express just up the block. What a minimart, a fresh fish counter, a butcher and tons of fresh fruit and bread. We gathered a few days’ worth of bananas, blueberries, yogurt and a liter of blood orange juice, reminding me of how much I loved it in China. Then it was home and on to bed, all the traveling finally catching up with us.
I remember well from my days in Shanghai how hard it is to make the transition that first night. Of course, you’re stone dead from being awake all those hours but your internal clock is still stuck on Mountain Time. Inevitably that conflict begins with dropping your book while reading and ends with waking up at 2 AM thinking it’s late morning. The trick of course is to just power through and let your exhaustion make the decisions. I did and made it all the way to our alarm at 7:00.
We had a leisurely breakfast and headed out around 10, beginning with a search for coffee. That effort was interrupted by a quick stop in a very beautiful neighborhood church, just around the corner from our place. Santa Maria in Vallicella, or more commonly known as Chiesa Nuova, was first built by Pope Gregory the Great in the 6th century. In the 12thit was dedicated to Santa Maria in Vallicella (Saint Mary in the Little Valley.) Three centuries later it was renovated by Saint Philip Neri (the patron of our little Albuquerque Old Town church) culminating in its final consecration in 1599. Neri is buried in a small chapel to the left of the choir. 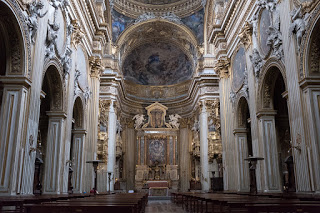 From there it was on to Piazza Navona where we achieved our coffee goal and got to meet Cesare, the owner of the restaurant who pulled us in from the street. We often just walk past these guys, or sometimes chat, but we stopped and had a nice talk with him, commencing with a bit of conversation in Spanish and ending with him telling us about starting Coyote Café in Santa Fe with Mark Miller in the 1980’s. Apparently out small world morning was focused on our home state, starting with Neri and ending with Cesare. Second breakfast was nice, a couple of Americanos, croissants (mine stuffed with Nutella) and a chat with the waiter about the nature of tourism in Rome. Like everywhere else, it is dominated these days by the Chinese.
Plaza Navona is built on the site of ancient Rome’s Stadium of Domitian. Built in the 1st century AD, it is an ellipse in shape and was originally formed by two levels of more than 100 columns (one of which remains below street level at the end of the plaza.) It was used for Olympic style athletics and was known more familiarly as the Circus Agones. “Agones” is Latin for “games,” and was modified over the centuries to Navona.
It took its present form in the 15th century when the city market was moved there. There are three large fountains in the square, the central one known as the Fountain of the Four River that was executed by Bernini in 1651. It is topped by a 4th century obelisk brought in from another Circus in the countryside. It stands opposite a renowned baroque church – Sant’Agnese in Agone by Borromini. Art historians consider the piazza special as the best representation of outdoor Baroque in Rome, as well as demonstrative of the competition between Bernini and Borromini in the space of public art. 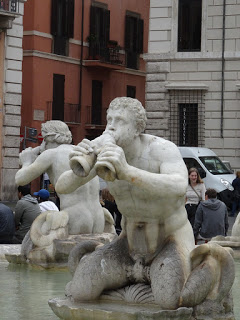 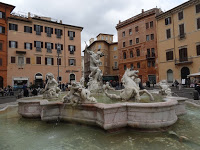 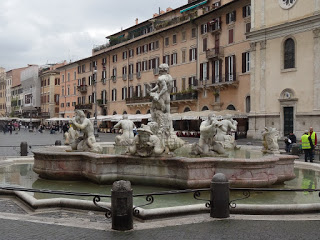 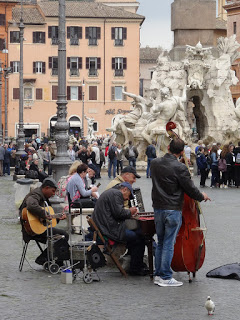 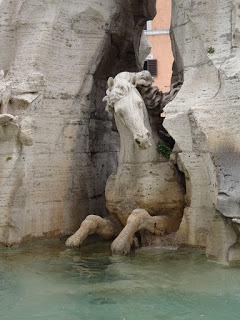 Around the block and across a couple of busy streets we popped into San Luigi dei Francesi, a little church on our way to The Pantheon. Built in 1589, it is home to several masterworks by Caravaggio, a detail that escaped us as we had not done our research before heading out this morning. This church is unique as it specifically serves the needs of the French clergy here in Rome.
Our main goal for the day was The Pantheon, the most remarkable remaining structure from the Roman Empire, due to its immaculate condition and the amazing architecture and engineering. On the site of an earlier temple commissioned by Marcus Agrippa, the Pantheon was built and destroyed and rebuilt a number of times between 0 AD and 126 AD when Hadrian commissioned it once again. The history of the building and the site is apparently one of great contention in archeological circles and it seems that no one really can say for sure who built the structure in its current form. What is incredible regardless of who did it, is the free-standing Rotunda which is comprised of 5000 tons of Roman concrete. It’s more than 20 feet thick at its base on only 7 feet thick at the ring surrounding the Oculus (the large hole) at the center of the dome. It was given to Pope Boniface IV, in 609 AD who ordered it converted into a Christian church and consecrated it to St. Mary and the Martyrs.
It was not as big as I had imagined it but nonetheless is was quite extraordinary. The enormity of the space inside the Rotunda was just breathtaking. And hard to photograph meaningfully. Much like the Grand Mezquita in Cordoba, it was not improved by its conversion to Christianity, but at least it remains intact due to that change. Unlike most of the Roman remains, the Pantheon was not stripped of its beautiful marble cladding and floors. 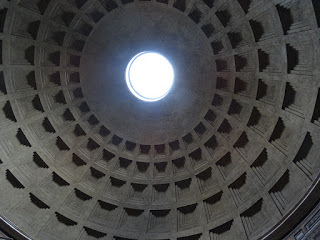 From there another stop at Carrefour for supplies and then a nice break at home for lunch.
Late in the afternoon, we decided to walk to the Vatican Museum to get an idea how long it would take. I bought tickets on-line before leaving, and our entry time on Friday is 8:30 so we figured it would be a good idea to get a feel for it. Along the way, we passed Castel Sant’Angelo and stopped for a few photos of it and the angel-lined bridge that crosses the Tiber River. St. Peter’s is down a long promenade from that point, and at 3 PM it was absolutely mobbed with tourists. So much so that it made our progress slow-going.
St. Peter’s Square was also choked, not only with visitors but with truly obnoxious young Indian men trying to sell “skip the line” tours. On face value, the tours are a good idea – pay 3 times the regular entry fee and avoid the regular ticket line which at this time of day had to hold a thousand or more people, snaking down one side of the square, across it and up the other. Probably 2-3 hours of waiting. One guy got very aggressive with us when we told him that we were not interested, telling MLW that he hoped we enjoyed our vacation by not spending any money. That bad vibe was broken by a truly nice young woman from Romania who politely explained her products and even took the time to talk with me about the Romanian language.

Once we found the museum entrance we turned around and headed back to our neighborhood to wait until night fall for dinner. We went back to a place around 8 PM that we’d passed earlier in the day, and had a great time chatting with the waiter about linguistic nuances. I had a very nice plate of roast lamb with potatoes, MLW decided to double down on Spaghetti Pomodori. Both were exceptional.
Taking the long way home we passed once again through Piazza Navona and found our new friend Cesare (from breakfast, long day) still trying to drag people into his restaurant. He gave us a good head’s up on places to avoid over the next few days due to a European Union ministerial gathering to celebrate the 60th anniversary of the forming of the Union via the Treaty of Rome. That plus a taxi strike tomorrow.
St. Peter’s at night is a completely different place. No people, lots of police, many, many homeless people sleeping under the arches at one end of the square and the Basilica itself nicely illuminated. It’s quite magnificent. 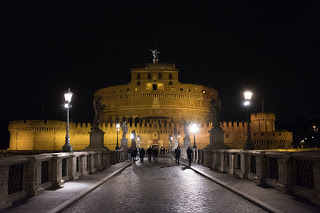