Skip to content
Date: March 28, 2017Author: tbaroundtheworld 0 Comments
Milan is a bit different when it comes to acquiring food. It seems to lack neighborhoods full of street side restaurants. It has been very easy to find a good meal in every other place we’ve been. Sevilla, Barcelona, Valencia, Madrid, Rome, Segovia, Toledo, Avila, even Paris. All have a ton of choices if you stay in the older part of the city. Milan though doesn’t seem to have an older part, or if it does we haven’t found it yet. It’s as though their development took a different path – they kept the 15th century things and replaced the stuff in between them with 19th century stuff. After 2 days here, and many miles covered, we’ve yet to find “the street” lined with al fresco dining spots. We saw a small one near the Brera Museum, and tonight we hiked to one on Via Dante, having seen a photo of it in one of our guides. Even it turned out to be very average, with only a couple of restaurants to choose from. We ended up sitting by ourselves inside one of them, outside dining, while preferable is dominated by smokers. MLW had Carbonara, I had Carbonara Gricia, mine having a different pasta (bucatini) and many more shallots.
Both were excellent.
We took a longer way home to get a night photo of the clock tower on Castel Sforzesco and to check out the other 2 restaurants on the opposite side of the street. A nice night shot of the Duomo completed my goal of getting one in each type of light.
The streets are much less crowded after 9 PM, I guess the hordes of students are off eating a group meal together. Perhaps in that restaurant neighborhood we haven’t found yet. 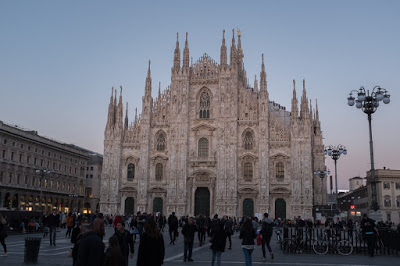