Skip to content
Date: April 6, 2017Author: tbaroundtheworld 0 Comments
Today was all about art, commencing with a 10:00 visit to our favorite museum in Paris, the Musée d’Orsay. Unlike most museums, the building itself is part of the show. Built for the 1900 World’s Fair and then doing duty as a train station and a luxury hotel, it was opened as an art museum in 1987. Known today for its extensive collection of mid-19thcentury art, the interior is just as magnificent as the treasure it holds. A giant space of iron, glass and marble. Whenever you find yourself in Paris, this is a must visit.

There are so many of our favorite paintings here that it’s hard to list them all. The 5th floor Impressionism gallery is excellent, as are the galleries dedicated to Neoimpressionism. There are four or five excellent Van Goghs and an equal amount of nice Gauguins. Cezanne, Renoir, Monet, Manet, Seurat, each is so well represented. The special exhibition this time around covered art in nature and (in my opinion) was worth the crowd merely to stand and gaze at Van Gogh’s La nuit étoilée. 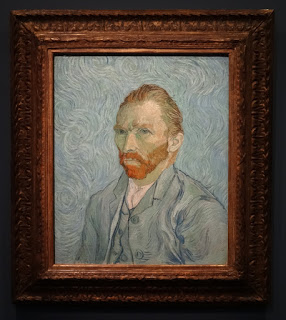 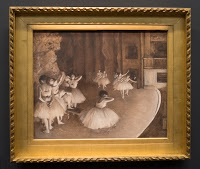 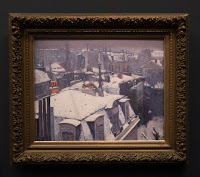 I’d noticed when buying the tickets that L’Orangerie across the river could be added in a special 2-for-1 deal so I opted for that offer. Somehow in our previous visits we’d missed it. So, after putting the finishing touches on the Orsay we headed towards the Pont Léopold Sedar Senghor and the Tuileries across the Seine.
Stopping to take a photo of the house barges, I removed my sunglasses before lifting the camera and the right lens popped out and hit the bridge. Three bounces, all in slow motion as I was thinking “please don’t go that way” and the lens went under the railing, and over the edge, down into the green water. This is the reason I carry back-up pairs of both my glasses, but what a heartbreak. Of course, it could have just as easily bounced in my favor, but not today. 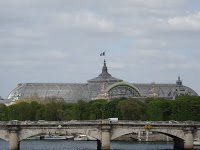 L’Orangerie turned out to be a gem. Built in 1852 to house orange trees in the Tuileries Gardens, the building had a variety of uses before being modified in 1922 to hold a composite set of paintings by Monet titled Nymphéas which consists of 8 panels out of the more than 250 paintings of water lilies in the complete series. Done towards the end of his life, and intended as a gift to France to coincide with the end of World War I, Monet refused to relinquish them despite being intended for this specific museum and hung under Monet’s specific instructions. They were finally put on display in 1927 after he died.
They are displayed in 2 egg-shaped rooms each holding 4 paintings under diffuse natural light. Each panel is approximately 20’ in length and 6’ in height. The presentation is extraordinary and I found myself spending more time trying to take photos than appreciating the details. 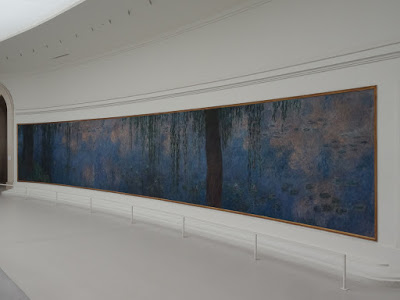 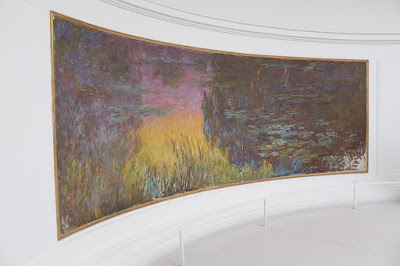 The downstairs of the museum is dedicated to the art collection of Jean Walter and Paul Guillaume and is considered one of the finest European collections of paintings. It comprises 146 works, from the 1860s to the 1930s, collected by Guillaume during his career as an art dealer. Every major painter from the first third of the 20th century is well represented including Picasso, Matisse and Renoir. There is also a temporary exhibition space downstairs that today was showing the collection of Shojiro Ishibashi, the Japanese founder of Bridgestone Tires. On loan from the Bridgestone Museum in Tokyo, the collection contains works by the major impressionists as well as Japanese artists from the Yôga school, a movement in Japan in the first decades of the last century in which Japanese artists emulated Western impressionist styles.
We took a long way home past our last apartment (the construction was done,) stopping at Carrefour for supplies and then L’Epicerie for a takeout lunch.