Skip to content
Date: April 8, 2019Author: tbaroundtheworld 0 Comments
Today we had lunch with our dear friend Ruth, the one and only person we know who lives here in Paris. She wanted us to have a genuinely French dining experience, so she asked us to meet her at Bistrot Mazarin, a cozy neighborhood spot just down the street from her home.
Brass, photos on the wall, red paint – if asked to articulate a Paris restaurant, I would describe it like this one. And a loquacious owner to boot.
There were many interesting options for lunch. Ruth went with a veal plate, MLW opted for a very interesting salmon and pureed vegetable dish. I went with Tatin l’agneau, lamb confit in a pastry shell topped with stewed Roma tomatoes and served with a salty brown sauce.
We’ve had a lot of meals on this trip, many of them exceptional. But this one topped them all, and it was undoubtedly the best “French” meal I’ve had, perhaps ever. It even topped the excellent duck I had last night, and this time the restaurant encouraged conversation. I started with a glass of Sancerre and then helped the ladies finish an excellent bottle of Beaujolais. Several hours of solving the world’s problems and a truly delicious tarte au citron and we were ready to have a walk around the district.
The restaurant was just behind the Institut de France, so we walked up the street and emerged along the Seine at the Pont des Artes. One of my 3 favorite bridges in Paris.
Originally built in 1802, the nine-arch iron pedestrian bridge served the people of Paris until 1976 when the Bridge Inspector declared it unsafe. Closed for renovation in 1977, it lost 60 meters of its length when rammed by a barge. It was then demolished and rebuilt between 1981 and 1984 to the same design, but minus 2 arches. Jacques Chirac officially re-opened it on 27-July-1984. Most recently, it was known for the “Lover’s Locks,” padlocks placed on its wire panels by people demonstrating their undying devotion to each other. Including me and MLW in 2014. In 2015, concerned about potential damage to the new bridge, the city removed the wire panels and replaced them with a special tempered glass. More than 2 million locks were removed, weighing 45 tons.
We crossed the river and took a ramp down to the newly dedicated pedestrian thoroughfare walking along under Pont de Neuf. Begun in 1588 and delayed due to the Wars of Religion, it was finally opened to traffic in 1606. Decorating the sides are 381 mascarons, stone masks representing the forest deities from ancient mythology. What you see today are copies of the original 1580 carvings, the originals having been removed in the mid-1850s and placed in several local museums.
We continued to the Pont au Change, a 19thcentury replacement for a 12th century bridge that got its name from the gold and silversmiths whose shops lined its sides.
Ruth pulled us aside into La Place Dauphine a tidy little park tucked in behind the Ministry of Justice. Originally formed from a set of small islands in the Seine, it was constructed in 1607 by Henry IV and named for his son, the Dauphin, the future King Louis XIII. House #26 marks the spot where Jacques de Molay, the last head of the Knights Templar was burned by the Catholic Church in 1314.
Crossing to the Left Bank, we walked Ruth back to her place, made our farewells and continued home. 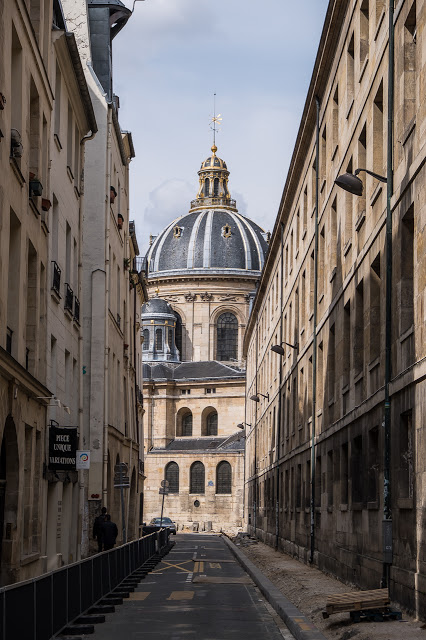 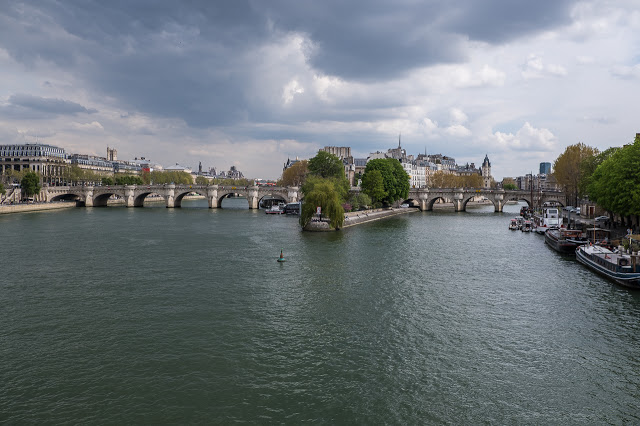 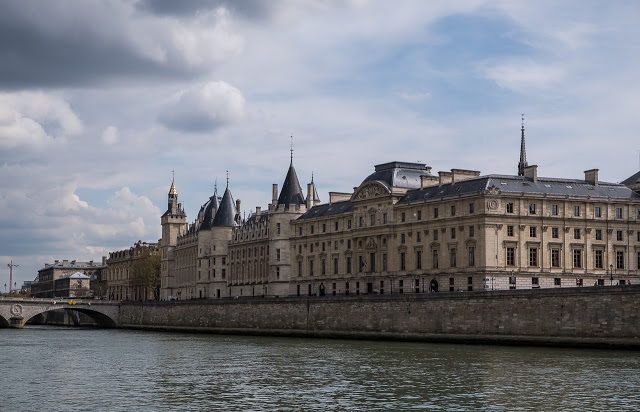 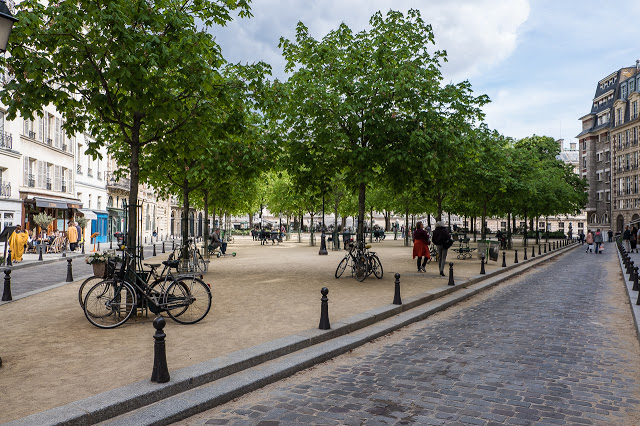