Skip to content
Date: April 10, 2019Author: tbaroundtheworld 0 Comments
The weather gave us a short reprieve in the later part of the afternoon so we decided to make the long walk to La Tour, because you cannot visit Paris without a visit to La Tour.
It hasn’t changed much, but the security sure has – the entire base is now surrounded by 10’ high clear glass panels in concentric rings. You can enter the garden (surrounded by 10’ high steel fencing) by passing through an airport-style bag check. To get under the Tower itself, you must go through another airport-style bag check, and you must have tickets.
We walked around it, because all I really wanted was a couple of photos and some churros. Well guess what, in all the confusion, the churro guy was gone. Instead, there is now a tidy food-related pop-up village of little white tents serving up what smelled like the most amazing food in the world. African, Mid-eastern, Caribbean, French, you name it and they had it. Giant piles of sausages cooking on grills. Huge paella pans filled with simmering stews. World music blaring. It was glorious, and a great place to find on our last day here. Best of all, the churro stand was right there in the middle. I ordered a “petit” and he cooked them right there in front of me. A dusting of powdered sugar and 5€ later we were on our way, happiness in hand in a paper cone.
The weather was suggesting that it wasn’t quite done with us, so we turned towards home and into a stiff headwind. The sky was getting grayer and more threatening. We crossed the Seine on the Passerelle Debilly footbridge, now adorned with lover’s locks, and walked past the Musée d’Art Moderne de la Ville de Paris, not to be confused with the national modern art museum which is located at the Centre Pompidou. Interesting building – it’s part of the Palais de Tokyo whose other half is dedicated to temporary exhibitions of contemporary art.
Further along, we passed what many people believe is a monument to Princess Diana who was killed in a car crash in the tunnel below. In reality, it’s a monument to Franco-American friendship offered by the International Herald Tribune in 1989 on the 100th anniversary of their publication of an English-language daily in Paris. Called “Flame of Liberty,” it’s an exact replica of the flame on the torch of the Statue of Liberty. Since her death, visitors have officially co-opted it for as a memorial, and it’s suggested that almost no one who visits it today knows its real purpose. In fact, the cab driver who ripped us off in 2014 on our first visit told us it was for Diana. The mystery isn’t helped by the fact that the plaques explaining it are missing and the carved names on the base of those who supported it, are unreadable.
From there, not much else to report other than maybe it started raining, but we weren’t convinced as it was so slight as to be unnoticeable. So – off to a final dinner and finish packing. Homeward bound tomorrow morning. 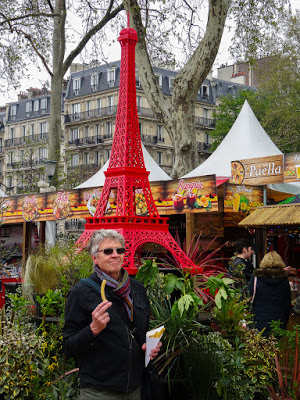