Yesterday began with a fanfare – literally. Walking out of the hotel on our mission to find the Tianshan Road subway station, we heard a rather sketchy version of The Star Spangled Banner being produced by some sort of horn. We found the culprit almost immediately, a man sporting white gloves standing in front of the office building next door with a gleaming coronet, playing his heart out. I tried very hard to get a photograph but he finished just as we passed by. He was done playing and was now engaged in lovingly wiping down the horn with a white bath towel in preparation for loading into his bicycle basket. A small opportunity lost.

At midday I took my friend Ling to a part of Shanghai that he had not seen. This despite the fact that he grew up here. It wasn’t much though, just a weedy path that provides a shortcut between the skyscraper where we work and the skyscraper where we were heading for lunch. More exciting perhaps is the fact that I took him to a restaurant that he did not know about, one that he pronounced “good” and “reasonably priced.” Shanghaiese it seems have a predilection to Japanese food.

The rest of the day was pretty much a blur of meetings in uninspired rooms. Last night though was one of those fun ones that make all this geographical disassociation worthwhile. Nothing big, just a bunch of little things.

We took two cabs to the Hongmei Lu Pedestrian Entertainment Street. No, not that kind of entertainment, I’ve mentioned it before – it’s a line of restaurants between Hongmei Lu and Hongxu Lu. There are a few of these little thoroughfares scattered around Shanghai catering to diners interested in a variety of choices. This street offers (from west to east) Chinese, American, German, Persian, Expat, Thai, Spanish and American again. We were headed for Thai.

One of our co-workers had not yet received his luggage from the trip over and hence needed to stop at the local fashion/pearl/knock-off/video game mall see if there were some reasonably priced clothes to bolster his sparse wardrobe. Being tired of shopping in such places and having to deal with the constant entreaties of, “Hello Sir, you need new underpants?”, Matt and I decided to head on to restaurant row. This time of year there is a lot of outside seating so we stopped at the Baby Bamboo Bar and ordered a couple of Irish beers. We’d been to this place before and last time had a good laugh at the 20 minutes, with my personal instructions, that it took for them to produce the Vodka and Lime that I’d ordered. The bar is run by a great crew of young Chinese that are friendly, polite and always in a good mood.

The night was cool and we were bathed in the scent of incense which ultimately turned out to be Raid Mosquito Coils, the flammable DDT kind we haven’t seen in the US since the sixties. Mosquitoes come early here and Japanese Encephalitis is a genuine concern. Something to ponder while sitting out nursing a beer. The waitress told me I was safe, my Marmot shell being impervious to the little bloodsuckers. Adding to the ambiance was the stream of loud 70s and 80s music pouring out of our spot and the one next door. Mostly it worked, but sometimes it didn’t, like when the base and percussion line from Credence Clearwater’s cover of “Susie Q” overlaid some forgettable ditty by ABBA.

Sitting along this lane is a great opportunity for people watching. Chinese strolling along chatting, foreigners doing the same but not quite carrying off their attempts to appear local.

The rest of the crew showed up and we debated moving on to the Thai place or just staying there, their menu of “Mexicali” favorites being hard to pass up. We chose the latter and scanned the menu. The Chimichangas, Quesadillas and Enchiladas were overshadowed by the Red Sea Burger. Not sure how a grilled Red Snapper served on a hamburger bun qualifies as Red Sea cuisine, but clearly struck the menu author as such.

I chose the Philly Cheese Steak seeing this as another poly-cultural experience in the making, if only for the name. It turned out to be quite good.

Food for six people in China can be a challenge of etiquette. The norm here is to bring the food as it’s ready and so invariably several people eat long before the others. This night not only did it come in shifts but it also came in types – the pair of Philly Cheese Steaks arriving first, much to my satisfaction. 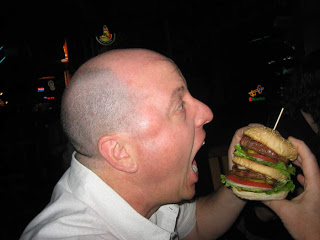 Dinner over, two of the crew headed back to the tailor to collect our friend’s suit – A Giorgio Armani for only $100 – the pants being ready for delivery having been hemmed. The rest of us decided to walk home.

Clearing the lane, we came around to a building under renovation. Bill observed that there was a man and woman lying in bed in the second floor window. I went back and sure enough, there they were rolling around under the covers. Scanning the first floor, we found two more couples doing the same. It’s not uncommon for construction workers here to live where they work – temporary dormitories at work sites are a regular sight. But this is the first time I’ve seen anyone living in the building they were remodeling. So much for privacy in a country of 1.5 billion.

The walk back to the hotel is mostly under the Ya’an Elevated Road. It’s cool and pleasant in the evening even if you’re bombarded by the noise of the traffic. After the first crossing we saw a man on a scooter literally riding against the automobile traffic. That was a first. Moving on we saw a policeman yell and whistle at a van that had decided to back up to recover a missed exit. He stood in front of the car, in traffic, and tried to manhandle to car to the curb so that he could yell at them some more.

Part of the walk takes you through a dark alley that is created between a line of tiny restaurants, open store fronts really, and a large barrier constructed to block the view of all of it from the street. A Potemkin version of the restaurant lane we’d just left, with quite a stark contrast between a place serving people live us and those that live and work here.

We passed by our favorite object of tittering derision – Pinocchio Men’s Club – and marveled at the matching sets of beautiful young women dressed in black and white and waiting in the front foyer for the next well-heeled customer to come it. I was thinking a Martini might be on order, but we elected instead to stay outside and marvel at the yellow Ferrari parked in the lot.

My first close encounter with a car came at the next crossing, sort of an acceleration ramp entering the elevated road. Halfway across a large bunch of cars suddenly appeared and we really had to scoot to avoid being creamed.

One last comment, about the sidewalks. There is often a line of parallel bricks embedded in the tiles. Apparently it’s there to guide the seeing impaired with branches off to the crosswalks. The contrast feels different than the surrounding surface and so the thought is you can make your way down the street successfully. I tried it with my eyes closed and it really worked, I was even able to detect a slight chicane to the left. Problem with walking with your eyes closed is that you often feel like you’re going to fall over. Or maybe it was the two beers. We’ll never know.