Four simple words to bringing to mind so many things tangible and ephemeral. The mysterious heart and soul of Central America and as it has turned out, the heart of our annual bird count as well.

When we decided to run the local Audubon Christmas Bird Count here in San Carlos, I started doing a bit of research with the count coordinators in the US. I was hoping to recommend a count circle centered on what I had determined to be the ideal spots here at the beach. As it turned out, someone had beaten me to it – a vacationing couple from New Jersey, all the way back in 1983. And it wasn’t a bad circle, centered a tad to the east of my recommendation, but still providing inclusion of the places I liked to bird. When I sat and read their account for that year, the habitat section described most of my favorite locales – mangrove estuary, shoreline, neighborhoods. But standing out among the prosaic was one that grabbed my eye: palm-lined barranca.

Land birding in this part of Mexico is a bit of hit and miss. There are no parks or wildlife habitats, and most of the land is being ranched, with the associated barbed wire fences and gates. I had really only spent time land birding around the condos, and the area was not bad, yielding most of the species one would expect in the Sonoran Desert. Those plus all the birds associated with tidal flats and the local ocean environment. An eclectic list, in every season.

But the barranca intrigued me so we asked around the family and finally found at least one possible location – a canyon just off the back bay of the San Carlos harbor. So off we went, finding the dirt road and our way back in. As it turns out, it was more than likely one of the service roads used in the filming of the 70s movie “Catch 22” as the airstrip used in the film was just the other side of the canyon wall.

By then, it had become a ranch road leading back into the hills and on our first visit, heavily populated by cattle. In spite of that, it was a beautiful place – a wonderful mix of desert flora with a small copse of palms anchoring the center of the valley. Making it one small bit better was the fact that the walls were so tall that the sun barely made it in there by the quite acceptable time of 8:30AM which meant no crack of dawn departures on our precious vacation mornings. From a bird perspective, it could always be counted on to produce great finds. Nearly all of our extralimital Central American species have been found there. And so it became the keystone site for our annual adventure and because of this, we’ve had many wonderful and not so wonderful experiences there.

In the early years, I was such a greenhorn American traveler that I was always in “Code Yellow” and never out of sight of the car. The first year, we were busy rounding up birds when along came a pick-up truck full of loudly laughing local policemen. Like so many gringos, just the thought of police in Mexico conjured so many horrific thoughts that my first reaction was to get the heck out of there. And my gut feeling was confirmed when they stopped up the road a bit, got out and started shooting at the resident pack of feral dogs. The report of handguns echoing off the canyon walls was enough to send us to the car and more civilized locations.

Another year, one of the best for birding, the dew was so heavy on the waist high grass that we were all soaked to the bone by the time we left. A couple of years ago, the ranch gate was open and we were able to walk farther back into the canyon than ever before, yielding a whole new list of species by way of the change of environment. More recently, we could only manage a few minutes because of the overwhelming stench of sewage, it having backed up from the small estuary at the end of the canyon. Despite these little setbacks, we always returned.

Last year though, the place changed. Instead of cows and dew and shooting policeman, we were greeted by hundreds of piles of construction debris. Lining the road, all the way in. Instead of walking down the small hill into the Palms, we had to scramble over ankle-turning rocks. The physical beauty of the place was horribly marred, much to our disappointment.

This year, the place was posted with a sign warning people not to dump their trash. And a lot of good it did as the debris piles had increased significantly. And so it goes, a natural place destroyed to satisfy a building boom driven my wealthy Americans with cash equity in their homes. It makes me wonder, if they would still build here if they knew the price. Then again, perhaps the fate of one small canyon, off the road and out of sight would mean little to these temporary visitors, interested mostly in enjoying their time away from work and the daily grind. 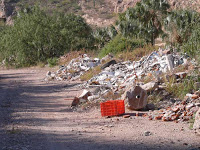 This brings us to the second dump, this one genuine.

The day wore on and we had developed a decent list of birds. One of our traditional favorites though – Cattle Egret – had eluded us. Knowing full well that there was one place where they could be had with absolute certainty, we decided to buck it up and head out to the Empalme Dump.

Several years ago we were told of the presence of a “cardinale”, a forest of Cardon cactus out on the plains east of Guaymas. Another family legend that naturally no one knew how to get to, but being the intrepid travelers we are, and being in possession of a truly mystical ability to ferret out obscure locations, we decided to go and find it.

Starting with the knowledge of its general (in the strictest sense) location, we headed out of San Carlos and selected the road to the Guaymas Airport as the most likely conveyance to our destination. In those days, the pavement ended at the parking lot, and from there is was a classic desert braided road – made broad by a lack of sides and meandering in all directions, hemmed in only by scrub, arroyos and the occasional building. I remember one special spot where the water pipe for a ranch house ran across the road, shielded by some sort of strange braided fabric, forming an ersatz speed bump. Not that speed control was needed as the wash boards did an adequate job of keeping one’s speed down to a very reasonable, teeth shattering level.

Around and around, up and down, driving both sides of the road, one eventually came to the small village of San Jose de Guaymas. Consisting of a large main square bordered by a church, a police station, and a row of apartments, it was so dead back then as to suggest abandonment.

From there, you continued on the ever widening road that passed roughly under a forest of high power line pylons. It seemed as though all the power in Sonora was distributed from this broad valley. More than likely they were associated with the nefarious gas burning power plant on the other side of the mountain, which gave Empalme and its environs their well-known yellow air.

Just as we began to wonder whether we were truly on a fool’s errand, the Cardon came into view. The world’s largest cactus, they are typically 30 feet tall with dozens of arms and a single trunk, four feet in diameter. 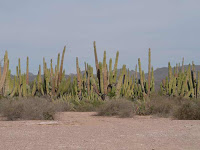 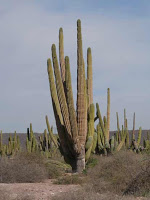 It’s always a special place to visit, but that’s a story for another time. What came after is the point of this tale.

During one of the intervening years, we decided to continue down the road just to see where it went. And where it went was to the dump. Not a dump in the traditional sense, but a section of the road where the people of Empalme came out to discard their trash. On both sides. The result gave an apocalyptic impression – trash and garbage blowing everywhere by a stiff dusty wind. People picking through it to recover whatever was recyclable. Old men riding bicycles. The occasional rancher with a horse drawn cart. In short, nothing like one would normally see in the course of their civilized life, and certainly nothing like a dump in the US. The smell was bad enough that you wondered if it made sense to roll the windows down at all. But you had to, because the place was littered with Cattle Egret.

Now the Cattle Egret is an interesting bird. Native to the Old World, they have colonized North and South America over the course of the last 60 years, starting originally in Brazil. How they came to be there, no one knows, but they have thrived and expanded and now they are seen just about everywhere south of the central US.

Fast forward to today. We made our way out and no sooner had we pulled up to the first pile of garbage did our first pair of birds appear, merrily scrounging in the trash for a mid-afternoon meal.

Driving on we found more and more until we ended with about two dozen, not a bad haul. A few other birds were here and there including a most unexpected Broad-winged Hawk, probably a first record for Sonora.

Having inhaled enough of that special gray dump dust we made our way back. It was a great little trip, adding Gray Hawk, Cassin’s Kingbird and a dozen or so Eurasian-collared Dove, another Old World species finding life so easy on our side of the world that they are filling every niche presented to them.

And so it goes, a good day of birding, a chance to visit our tall cacti friends (collecting many pictures and wondering how much longer they will last) and a great end to the day with a boat-sized margarita and a piece of pressed fish, al mojo de ajo. 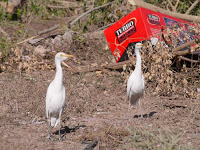