It only takes one little thing to dissolve you into a puddle of despair in this place. Every day seems to be made up of a series of sharp highs and blunt lows and not much regular life stability in between which makes it hard to manage your time and plan your activities when you never know what’s just around the corner. Of course this is true of life no matter where you live, but here because it’s so alien, the little things just seem to be more crisply in focus and capable of knocking you down right quick.

I was thinking about my eating habits at work today and recalled a time when I was not a bad practitioner of Chinese cuisine. I had this big thick cookbook, the right tools and a full set of ingredients on hand, procured on weekends at the local Asian market. Cooking Chinese is really not that tough and it doesn’t have to come out perfect to be good enough. I’d created many a meal in the past that was at least minimally worthy of the worst Chinese restaurant I’d been to. And some were even worthy of the better ones. But it’s been a while and the skill has certainly atrophied to the point where I’ve lost the understanding of the most basics. Every cuisine has them, French has cream, Italian has tomatoes and New Mexican has chiles. Mongolian I suppose has fermented mare’s milk, but that’s a story for another time. Working with those you can generally whip up something you would not be ashamed to feed a visiting Fireman. So I went off to the web to conjure up a few recipes to see just how hard it would be to get rolling again, after all I am in China and the fixings don’t require anything but a stroll to the market down the block. Frankly, there is no reason for me to be eating peanut and jelly sandwiches 5 nights a week (aside from the fact that they taste really good.)

A little bit of research and the understanding slowly crept back into my head – sugar, cornstarch, vinegar and rice wine – the cornerstones of just about every dish from this side of the International Dateline. All fine and good, but these items were not going to jump off the shelves into my basket – finding them in a store full of Chinese labels was going to take a bit of work and so I put myself to the task of making a shopping list, written in Chinese characters. What could go wrong, head to the store and wander around with a piece of paper in front of my face until you see bottles and bags with the same characters. A foolproof plan if there ever was one.

Sugar and vinegar were easy, single words and common at that. Rice wine was a bit tougher, but two co-workers helped me with that one. Cornstarch was another story and the discussion of its proper name provoked an argument between my helpers. Seems they might not call it the same thing here that they call it in Shanghai. Or Sichuan or Hunan for that matter. So I took both suggestions and wrote them down.

Mr. Jiang collected me at four and I spent the time on the ride home making plans for him to pick me up on Saturday for a dinner date in Dalian with some co-workers. I’m really getting into the swing of communicating with him and I’ll admit that it feels darn good when I formulate a complex sentence in Chinese and he tells me it’s correct. Today he also told me that he likes to work on Saturdays because he enjoys the overtime, dropping the hint that Sunday was not bad either.

After dropping off my stuff I shoved a couple of empty shopping bags in my messenger bag, grabbed my shopping list and headed down the street to the new Tesco market. I have to say, this newly opened store has really cheered me up on my shopping trips, it being clean and bright. Far better than the other two I’ve been using.

Now that the weather is nice, the sidewalks are jammed with street vendors selling fruit, ceramic Santa Claus butter dishes, ocean going container ship models built from plastic pop beads, women’s knee high stockings, Hawaiian print short shorts and today’s special, travel sized packs of Kleenex. The one food item that caught my eye was some sort of dough based treat that looked a lot like the cinnamon crispers you find at fairs in the Southwest. Kind of a pale brown ribbon. Well here the ribbon was being dispensed from a dough press and the operator was taking up the output and folding it into small piles. The interesting part though was the means by which the thing was running – a small diesel engine belching oily gray smoke through an exhaust pipe over the dough ribbon output. These kinds of distractions make navigation kind of tough, but the booming disco beat coming from the stores helps to keep you focused and moving forward.

I crossed the street and stopped to tie my shoe at the store entrance. Once done I reached in my back pocket to get my shopping list and discovered that it was gone. I mean really, how does a piece of standard sized letter paper folded in fourths fall out of your pocket on a 2 block walk? It was just another one of those little coral reefs thrown in front of my ship of progress and I was instantly depressed and angry at the same time. I had no means to go home and print a new one, I had no chance of finding the stuff without it and so my only option was to turn around and head back home, my spirit dashed once again. As I crossed the street I decided at least to watch the ground on the off chance I might stumble upon it, but I didn’t have much hope.

I paid particular attention at a couple of spots where I’d done some gymnastics to avoid an obstruction or where I had accidentally ended up on the seller side of the carpet which required a leap, but nothing was there. I kept on going with each white scrap of similar size giving me a moment’s hope.

Halfway back to my apartment, I saw a piece of paper up ahead that had some writing on it and nearing it I also saw that it had a size six hiking boot tread on it as well, but wonder of wonders it was my list. I turned around and headed back – I was in business once again.

Grocery stores in China are generally in the basements of buildings, don’t ask me why. The new Tesco though seems to occupy an interstitial space and it’s hard to find your way in without simultaneously going up and down escalators to get there. I made it a point of going in the way I’d last gone out on my last visit but somehow I ended up at a dead end requiring a ride up to another floor. It’s worth noting right now that when I subsequently left I walked right out where I came in, on the same level. I’ll figure out how they’ve managed to bend time and space some other time.

I made my way into the main entrance, grabbing a hand basket and willfully ignoring the young women who are supposed to seize my messenger bag in order to dissuade me from shoplifting. They take away your handbag, man-purse or backpack and seal it in a big blue canvas affair with one of those non-goes we use in the states to protect Banana Republic underwear. I walk past them all the time and they watch my progress hoping I’ll comply but way to daunted to yell at me.

In addition to shopping for my target items, I decided to take my time and really peruse the offerings, something I never do because shopping here puts me in a frenzy and my survival mechanism is to get in and get out as quickly as possible. But today, why not, it’s not like I have anywhere to go. An aisle dedicated to myriad Oreo based products brought to mind a show we’d watched some time back on MSNBC about the profusion of Oreo items over here, each designed to capture the interest of the Chinese consumer and to keep them buying. Here, you don’t find regular old round Oreos, you find Oreo bars, wafer cookies, sticks tubes and cudgels. I tossed a box of chocolate covered Oreo wafers into my basket. I found Chinese Ritz Crackers and the Lay’s version of Pringles, selecting Traditional and Lime flavored.

Eventually I found my way to the Aisle of All Things Bottled and using my little character list I immediately found two types of vinegar. Hot on the heels of that success I added a bottle of Sesame Oil. Rice Wine though was eluding me and I’d not yet attempted cornstarch so I wandered around until I found a couple of young women in need of an assignment and I showed them my list. Cornstarch – forget it – this store doesn’t have it. Expressing skepticism in my best Chinese, they took me over to another girl, the expert in grains and nuts. She looked at the characters and said “No.” I pointed to the second set of characters, the other name suggested by my No. 2 Work Helper, which was printed right by the first one and she said “Yes”, shuffling me off to a pile of zip lock bags full of the stuff. Sugar was easy and all that remained was Rice Wine which a fourth young woman obligingly led me to. My plan had worked, the goods were mine, and I checked out and was on my way.

Completely unrelated to this story, I wanted to add a couple of photos I took the other day following our hike up Da Hei Shan. The cab dropped us off by our favorite western restaurant – The Real Eddie’s – and we hoofed it down the alley to his place, a Philly Cheesesteak in mind. Walking along the backs of other restaurants we passed these two young women, waitresses about to go on shift, out back washing their feet and giving themselves pedicures in tubs of dishwater. I tried real hard to think about how the local restaurant reviewer in Albuquerque would handle such a thing and couldn’t come up with anything. Offended or amused, I’m not sure. Here though it was just another one of those funny little things you come across when you least expect it which is honestly, all the time. 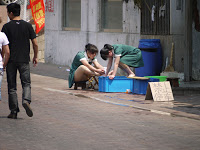