The name of the building I live in is Jun Yue Hao Ting – something, something, imperial mansion. It’s neither of those last two things. As buildings go in Kai Fa Qu, it’s pretty nice but “mansion” is not a word I would use to describe it.

Apartment living here is a bit different than it is over there. First of all, they’re all owned by individuals, more of a co-op than a true apartment. Secondly, the builders tend to move a bunch of people in long before the building is complete in order to generate some cash flow to pay for the finishing touches. So while we’re living here, the management office consists of two card tables, a phone and three folding chairs in a roughed in room the size of a dirigible hanger. I suppose someday it will be quite impressive, today it’s quite unfinished.

We do have a doorman, some of the time and when he’s on duty he often has the security door propped open with a chair so that he can go outside and supervise the guys finishing the rest of the building. At night though the door is generally locked and he is nowhere to be seen. There are two elevators on my side of the place, really really slow and generally kind of dirty. The other day the walls were covered with the handprints of someone who had been doing drywall work. This morning the floor was wet from who knows what. And then there’s the magic formula of pushing button number 24 to go to the 24th floor but watching the numbers go by until it says “27” when you arrive.

My floor has 4 doors and I assume there are 4 families living up here. I’ve never seen them and it’s not uncommon for out of state people to who units that they never live in. I have heard people rustling around on occasion.

Trash is an interesting challenge as there doesn’t seem to be an organized way of collecting it. Maria my consultant told me to leave it in the stairwell and I tested that theory 8 days ago. It’s still there. One of the ghost families put some cardboard boxes outside their door and they remained there for 2 days until finally disappearing. So right now I am testing that theory with some cardboard of my own. It’s been 3 days. Wet garbage is easy – everyone just dumps it on a pile outside the front door and it disappears the same day

This is my building as seen from the park across the street. My unit is smack in the middle column, four floors from the top.

If you look up the center line until you see the one and only box hanging on the wall, that’s my place and that’s one of my air conditioners.

This is my Poang chair from IKEA. Sitting here in the bay window I can enjoy the view of the city and the ocean. 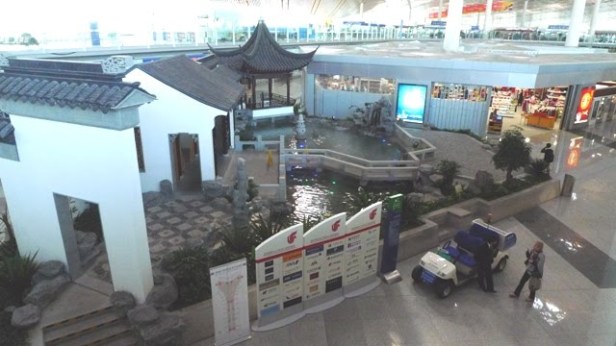 Living room seen from the Poang chair. Dining room beyond with Guanyin meditating on the table.

The other side of the living room with my giant television. It’s tuned to BBC News just about all the time.

Shot across the dining room table to the kitchen. Beyond is the glassed in room that overlooks Jin Ma Lu, the street out front.

Didn’t want you to miss an opportunity to see the giant air conditioner that provides a nice Feng Shui balance for the tiny refrigerator. 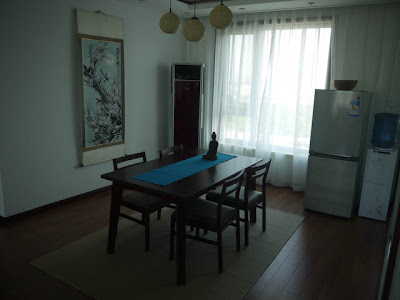 Guest bedroom, sign up for your stay now, the list is filling fast. Yes, the duvet is a bit small. The landlord did not understand the concept of buying up a size and chose the appropriate cover for the precise matress size. And yes, the mattress is as thin as it looks, but oddly comfortable.

Other side of the guest bedroom. Although this is a moderately large apartment, the furniture is even larger. There are no closets so you need an armoire. And they’re not small. 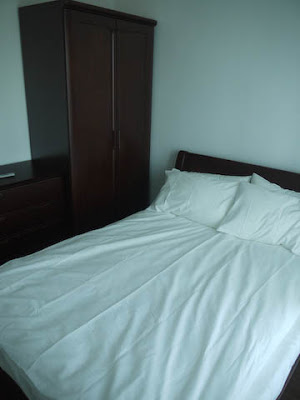 Master bedroom from the doorway. That quilt is tough on the brain, with diagonally arrayed pockets it’s hard to tell if it’s straight when you make the bed.

My attempt at peace and harmony. Vase alone with simple table in small white space.

Another shot of the kitchen. That toaster oven on the left is something, it uses lamps instead of coils and you have to use special sunglasses when using it.

Glassed in porch/laundry room annex. No room for a dryer anywhere else, so here it is. About the size of a large microwave, it works surprisingly well. The hangers you see are hanging from the clothesline system that is raised and lowered via a crank behind the dryer.

Second bathroom. Note the shower that has no enclosure whatsoever. Very common here, sometimes the shower heads are in the middle of the room. 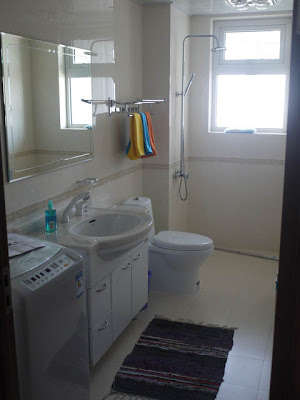 The big brother of my Kerren Hotel washer. This one’s a beast and it does a good job. Here’s the door closed shot. 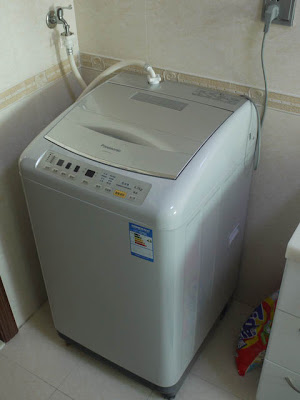 And here’s the door open shot. I used it today for the first time and honestly I figured it out despite the labels being solely in Chinese.

View from the living room window. That temple appears to no longer be in use. 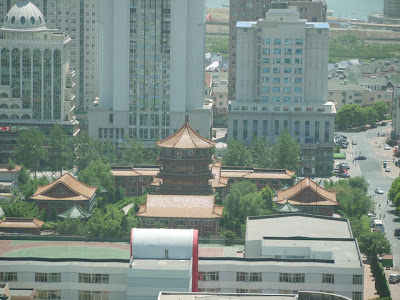 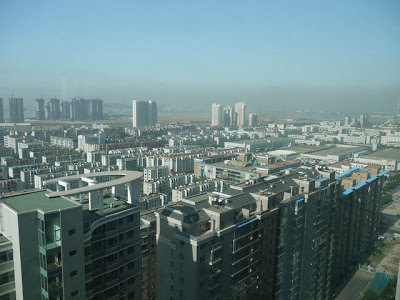 Another living room view. Those towers on the right side are beachfront.

View to the northeast towards Korea, I expect this is where the missiles will come from.

Closeup of the bridge they are building between Kai Fa Qu and Dalian city, supposed to take some of the traffic load off of the current connection and I’m sure it will until they add a million or so new cars. 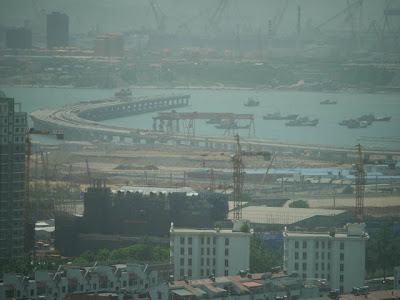 View of the flying saucer from my bedroom window. They are preparing it for a mission to Mars. 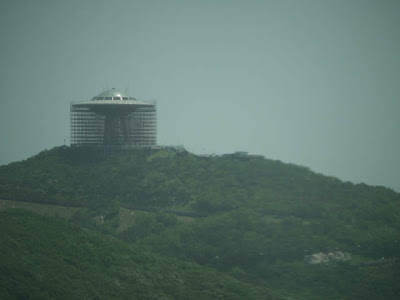 Big beachfront restaurant, straight out my back window.

View of the Inn Fine Hotel, my former residence of last week from the guest bedroom. Those mountains in the background are the ones we climbed on Dragon Boat Festival Thursday. 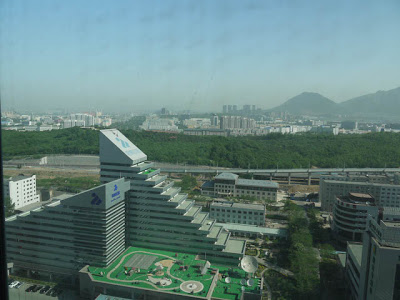 Also from the guest bedroom towards Five Colour City which is tucked down between the tall buildings. 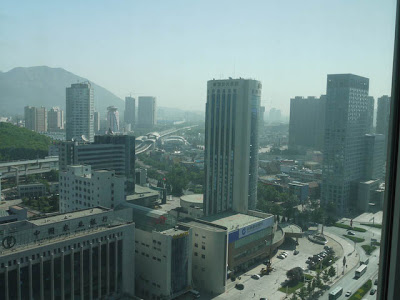