My embarrassingly shopworn passport now sports 22 exit stamps from China. How it got to the state of smeary red blotches and woefully dog-eared corners is a long tale. The details of this story are not only an accumulation of the miles, the hours, the lounges, hotels, delays, conversations, food, weariness, energy and awe, but more importantly they manifest themselves in the changes to me, the person. Travel apparently does that – it changes you at a cellular level, sparking hosts of tiny mutations that either make you an addict, or a hater. Or probably a little of each.

I find myself looking ahead and realizing that the end to this phase of my professional life looming. Still cloaked in a bit of indecision it will come sometime in the next 6 months when I put the grand in-country Asian experiment behind me and return to how I supported this work during 2006, 2007 and 2008 – namely working from my home office in New Mexico and showing the flag on business trips. The early chapters of the story made the biggest difference, turning me from someone who dreaded infrequent hour-long trips across state lines to a guy that got itchy to be back on the road every time he was home for more than a couple of weeks. That restlessness was never about how I felt sleeping in my own bed, it was more due to the thrill I was getting every time I navigated a new airport, talked to a cabbie and spent that first night in a hotel, somewhere far away. Early on, the thrill of making my way across 15 time zones and wandering around some of the largest cities in the world was simply too hard to resist. While it meant putting all the things I loved regularly on hold, at the time it seemed worth it given what I was seeing and doing. These days the balance is shifting back to the quotidian – my desire to spend my time among the people and the things who really make me who I am.

I had a hard trip back this time. We had to spend an extra couple of hours sitting in the lounge in San Francisco because the weather was rolling in and the planes stopped rolling out. It began with an hour circling the airport and ended with a two hour delay. In between those we suffered through that horrible moment when you read the board and see that you may as well go sit back down. We also had to bear some person telling us that the lounge area where we were sitting “was supposed to be a quiet place” as he stormed out, denying me the chance to snap back. Funny he should say that – I guess in response to us talking -when shortly after he left another guy came in who never stopped talking on his cell phone, telling everyone in his Contact list that he was on his way back to Boston, that he’d interviewed with Oracle and that they wanted to send him to Australia. I couldn’t count the calls – there were so many; more than the total number of people I know. He was loud and it only ceased when he would get up to go to the bar.

Things got worse when another business traveler put his Blackberry on speaker phone and sat there hunched over, yelling at some woman on the other end of the call. They were working on an email memo and fretting over the most mundane details of wording, changing “be ready to cover your plans” to “come prepared to discuss your options.” The more I listened the more I became amazed that business functions whenever there are people involved. If this guy – obviously paid well for whatever he does judging from his clothes and his shoes – couldn’t take 5 minutes to write a memo on his smart-phone without dragging a second person into the activity, well, I don’t know what to say. I don’t know how people get things done. Maybe they don’t.

While my week at home was as wonderful as ever, the cost of making the trip was high. I simply couldn’t shake the jet lag this time around and I was feeling so low that I spent most of my time blanketed on the couch watching the Olympics. The physical effects are starting to take a toll on me; I’ve always felt them but these days it’s starting to feel like the rubber band is stretched a bit too far. As the week rolled on, never once did I start to feel like I was ready, or even remotely desirous of heading back to the airport. And this shift – the high physical cost of coming back – is probably the biggest change of all and the foremost reason why I’m ready to start winding it down.

While the weather was springtime New Mexico glorious, I was too unraveled to do the one thing I wanted to do the most – get in a handful of bike rides. Instead we spent our time cheering for Team USA, seeing some movies and just catching up. When Saturday rolled around, I finally managed to force myself out the door on the day before departure, ironically on the one bad weather day of the week. Sandhill Cranes were migrating overhead; it was gray and windy but not terribly cold. Just not cheery. As I made my way out of town, a couple of birds flew across the road and landed on a barbed wire fence up ahead – Western Bluebirds, shockingly cerulean against the dun backdrop of the sand hills along the mesa. I realized that I hadn’t seen them in years because over the course of the last 4, I was not here to see them when they make their way from the frosty winter plains of Chihuahua to the grasslands up north. It was then that I realized that I was trading new experiences for the things I truly enjoyed, and that the value balance was finally shifting back to the latter. I rode on into the wind, dreading that 4AM alarm that I knew was waiting for me come Sunday morning.

Back at the beginning of this adventure I started to take photos of the plane waiting to carry me off. It began with shots of the daily 747 to Shanghai, taken from the concourse. In those days I had no status and the lounge was off limits to shabby travelers like me.

Lately it’s the 777 to Beijing taken from the lounge seat where I wait. The unchanging nature of these shots is probably the best testament to how something so bright and shiny can quickly become old and dull. There are a 100 stories behind each of these photographs, each interesting and unique. And yet they all began in the same gray or white aluminum tube, far above the Pacific sailing towards but never quite fast enough to catch the sunset. 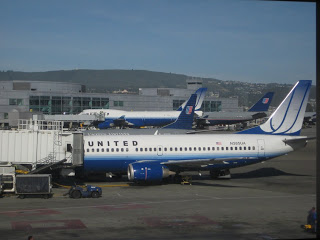 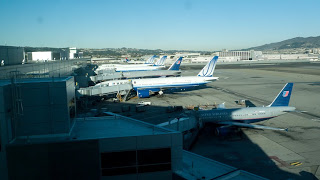 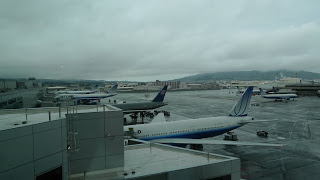 One thought on “Some thoughts about where I am”