The Spring Festival in China starts on the 1st day of the 1st Lunar month of the year. The notion of “spring” is a bit misleading as it normally occurs in January or February and so in almost no way represents the western notion of what springtime is. This time of year in northern China is cold, dark, wet and totally uninspiring. The only heat we feel is from the never ending shower of burning paper falling from the sky, the remnant of an apparently inexhaustible supply of fireworks.

The biggest days are the first two, essentially New Year’s Eve and New Year’s Day. It’s a time for more fireworks, visits with family and friends, the exchange of gifts and the giving of the Hong Bao, the annual bonus or a token gift of cash to the children. Almost all the Chinese I know complain about the cost and the time, and the driving all over the place, something I can identify with due to my required presence at two and sometimes three Thanksgivings when I was growing up. Despite the complaints, I think everyone likes this time of year.

The holiday extends 15 days, until the night of the 1st Full Moon and that night is called Yuán xiāo jié, 元宵节, which more or less translates to “first evening festival.” More romantically in English, it’s known as the Lantern Festival. Like everything else around here, its origin is cloaked in mystery. My preferred story involves (once again) the Jade Emperor. It seems that he had a pet goose that took a flight down to earth and was mistakenly killed by some ignorant villagers. The Jade Emperor was very upset at this brazen affront so he lined up 7 dragons and was planning to send them to burn the homes and the fields of the offending people. A kindly fairy overheard his plan and flew down to let them know what was in store, telling them to light red lanterns. They did so and when the Jade Emperor looked down on earth he saw glowing red and thought that the dragons had done their job – he mistook the lanterns for flames and so put the dragons back in their crates for the night. The villagers were saved and ever since that time, people light lanterns to keep the Jade Emperor confused.

Back here in the real world, the holiday is celebrated pretty much in the same way. Most towns and cities have some sort of Lantern Festival display throughout the Spring Festival period and on the last night lots of people go out to see it. Dalian has its in Labor Park, close to the center of the city and that’s where I headed.

It wasn’t a great day, it was cold and the sun had not shown its face all day long perhaps having been scared off by the fireworks. Even burning gas giants have a limited tolerance for explosions, or so I’m told or maybe the clouds were simply smoke that had not blown away. I had my driver pick me up around 4:30 figuring I could head into town get some photos before dark and stick around until the lights came on. It was a bleak ride in and no better upon arrival. Before dropping me off I was given a lecture about pickpockets and asked to verify that I had my wallet in the front of my pants. Parking at the main gate he told me he’d find me when I was done and sent me on my way. I paid 10 kuai for a ticket and went in.

I was here last year and pretty much knew what to expect. The park is decorated with all kinds of what I would label “immoveable floats” depicting Chinese themes constructed out of brightly colored fabrics. The overall theme is whatever annual zodiac animal it happens to be, and this year it’s the Year of the Tiger. I wandered around photographing this and that and not really getting a good vibe from the place because the weather was just so gray. It was crowded but not so much so that it was hard to get around. It was impossible though to photograph anything without a couple of young people standing in my way while flashing a “V” sign for whoever was taking their picture. I went down an avenue crowned with a series of tiger faces, the road forming a giant asphalt tongue, and took a left through the one place that was the same as last year – the tunnel of round red lanterns. I like this spot – the flow of it is quite beautiful and very cheery and would be a great place to stop and just soak in if you happened to be in a bad mood. No unhappy person can make it from one end of the tunnel to the other without cracking a smile and finding themselves thankful for something.

Running up the center of Labor Park is a long flight of stairs that climbs a hill to a giant red and white soccer ball that also happens to be the door to an underground disco. Lining the stairs is a series of bronze statues depicting the 12 animals that form the zodiac, each of them having a bright golden spot or two showing through their natural brown patina from the Chinese rubbing them for good luck. I always wink at the horse when I walk by. Behind the animals were floats with dragons, drummers, Beijing Opera masks and even one depicting the Chinese space program. At the top, the path was flanked by two sinuous golden dragons framing a giant blue and white inflatable Ming dynasty vase. Off to the side were green Saguaro cacti, toadstools and some tall, stalky mushrooms, one of which was suffering from erectile dysfunction. Here and there were little green, pink and yellow cartoon tigers, waiting to pounce. Down the hill someone was tolling the big bronze bell which gave the place a bit of a mystical, ponderous bent until suddenly, at 5:30 PM, the lights came on. And everything changed.

There is just something special about colorful lights on a cold and gray winter’s eve. For me it was funny – I had already been to the top and was pretty much satisfied with the pictures I’d taken and so was heading down. But now I had to start up again because everything had to be seen a second time. Climbing up as it got darker it became more and more beautiful with each step I took. I had not stayed for the lighting on my last visit and so this was special. Everything I had seen on the way in was transformed into something else, far more beautiful. I simply wandered around gazing and appreciating every little bright detail. Once again at the top of the stairs, the giant vase at my back, I looked down upon the park – the sky was the deepest clear blue offering a backdrop to what were now the black outlines of the city skyscrapers. Big firework explosions were going off behind and between the buildings – red, green, gold and silver. Spread out below me in the dying light was a panorama of brightly colored displays, each more eye catching than the next.

I slowly walked back down marveling at how everything had changed so much in such a short span of time. At the bottom of the hill I turned left knowing where I had to go – back to the tunnel of round red lanterns, now changed from just beautiful to breathtaking; such a simple yet powerful thing, electricity.

It was getting dark so I headed off to the one part of the park I’d not yet visited, stopping to enjoy a float covered with whimsical representations of the zodiac animals. One big rooster and a bright pink horse caught my eye and sent my thoughts far around the planet to people safely tucked in their beds back in the world.

Walking out I again passed one last time under the tiger heads now brightly lit and like everything else in the park nothing like they were on my way in. I found my driver at the gate and we headed off to the car, next stop dinner with friends and the promise of even more fireworks. 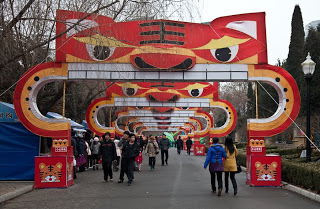 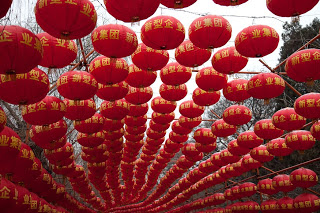 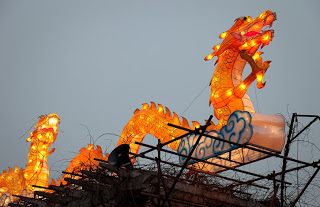 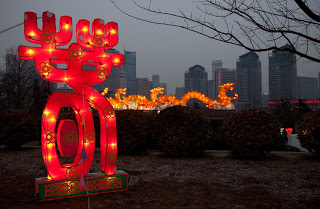 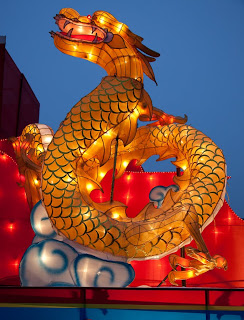 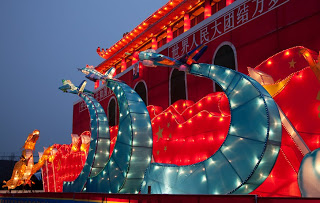 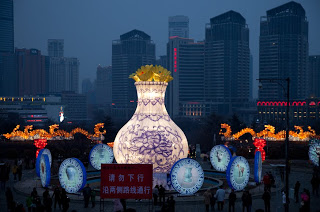 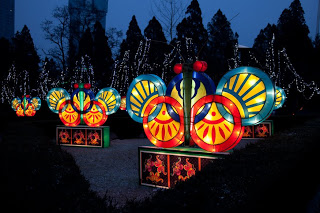 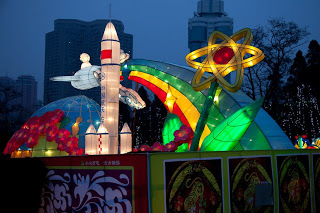 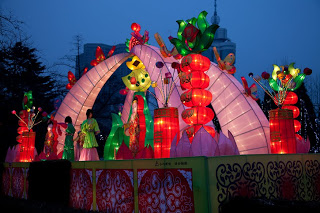 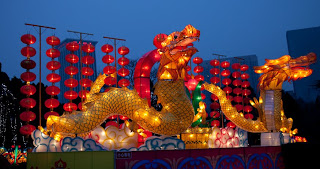 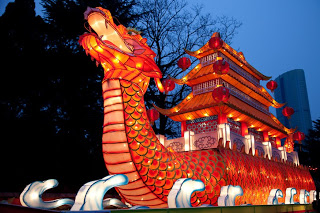 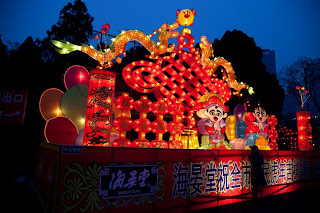 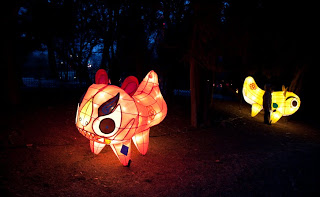 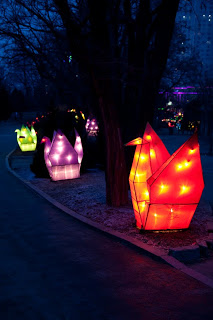 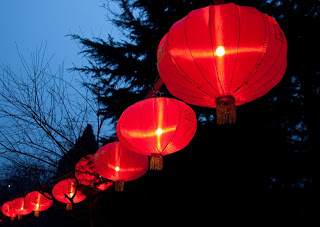 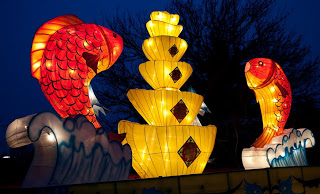 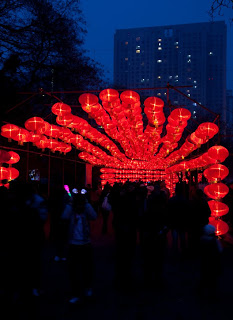 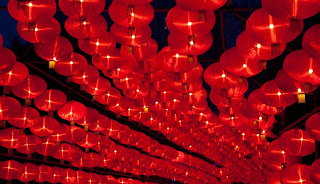 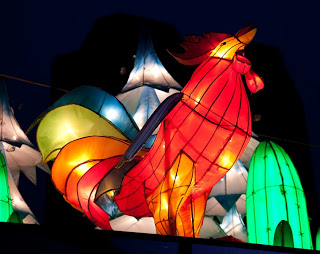 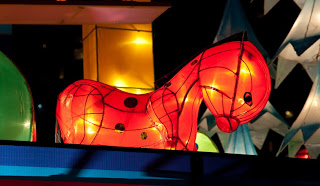 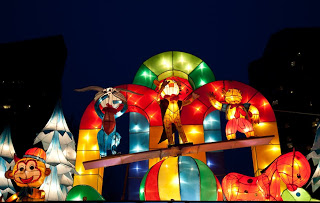 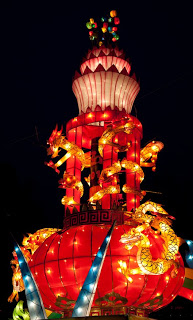 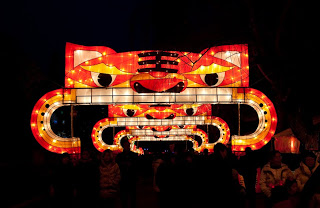 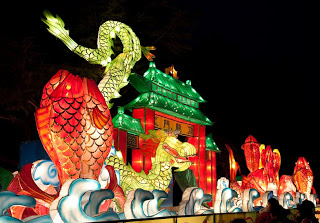