We spent the first part of Saturday at L’Almoina, a little museum a block away from our place and recommended by one of our guidebooks. You can look down into it through a pool of water that is located just behind the Basilica on the far side of the Place of the Virgens. We’d stopped in on our first night here (many museums are open until 8 AM) but were too tired. We were refused at our second visit because it was too busy and they like to limit the amount of visitors. Number three a few days later also failed to be a charm, but only because entry on the hour means you must use a tour. We cooled our heels over a cup of coffee and returned at 11:30 for a few ticket.Completely underground, the museum catalogs the history of Valencia from Roman times (2nd century B.C.) through Visigoth (6th century A.D.) through the Islamic era and up to the Reconquista in the 13th century. You walk among ruins of the original foundations of the Roman Forum and baths, as well as the original intersection of the two main roads of the regions, paved in big stone slabs. Dotted here and there with architectural elements from temples, mosques and churches as well as excellent video stations with depictions of what things looked like, you get a great sense of the history of the city. At times it was a bit crowded, chiefly at the moment I had to tell 6 teenage boys that standing on the narrowest pass-through was not the best place to admire someone’s cell phone, the flow was okay but it was clear why they wanted to limit the attendance at any given moment. Upon leaving I told the guy working the desk that it was a wonderful place and he gave me a pen to sign the guest book.Next we spent a couple of hours walking the Jardín de la Turia in the opposite direction from what we had done the other day. Talking these long walks through the districts really gives you a great sense of a city, much more so than simply visiting recommended sights. We found a main shopping district, a giant grocery store with the “cheapest gas in town” at $8.25 a gallon, the Bioparc Zoo, a lake brimming with swan boats and the end of the Jardín, close to where the city engineers had re-routed the Turia following a disastrous flood in 1957. We turned our backs to the wind and headed back to the old quarter for a lunch of bocadillo (jamon, lomo and queso) and a rest.As evening appeared we went for a walk in another new neighborhood just off the Plaza de la Reina where we found a fancier shopping district and a portable Horchateria. We went back to the original paella restaurant to sample their Paella de Pato – duck rice. I was hoping for a local beer but all they had was Amstel so we went around again with a couple of glasses of their Rioja. Following dinner he crossed the plaza to see if we could have a look at the Holy Grail, missed on our earlier in the cathedral, but the chapel that houses it was closed. There was a small bonfire burning on the church steps and people in white vestments were gathering along with tourists, each with a white candle as part of some soon to embark holy procession. We took candles but decided not to march – we’d had enough walking for one day and the wind was picking up cold and blustery. We passed by our little orange tree park and headed home. 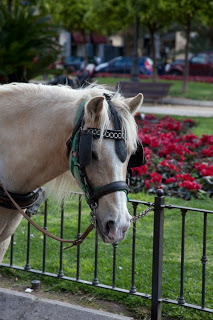 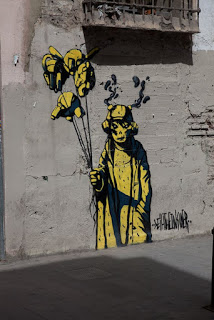 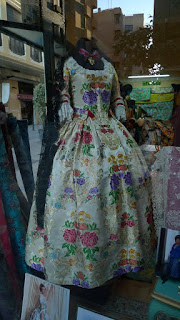 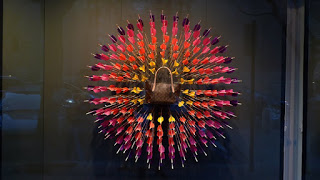 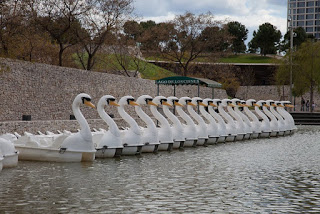