Our train was due to depart at 12:40 so we got up early, packed what was left and went out for a stroll, stopped at the old Horchateria one last time for a drink and a farton. Emilia, our landlord, met us promptly at 11:15 to return my deposit and to say goodbye. We spent 15 minutes talking about travel and exchanging double cheek kisses before we went out the door. There were cabs waiting at Plaza de la Reina and 15 minutes later we were in the train station. Of course we had a debate about whether we could have walked but sometimes $10 is a worthwhile expense to avoid walking a mile or so while dragging a carryon bag over an uneven sidewalk trailing behind a throng of German tourists.The train boarded a half hour early and left on time. Rail travel is just so civilized for this short stuff, a commuter flight would have been faster but cost more and in the end a longer trip due to the time it takes to get to the airport and pass security. I wish our country had more of it, but the American mindset simply is not in a place that would make high speed rail travel feasible. No one want to give up their truck.The countryside from Valencia to Madrid looks much the same as that in Northern New Mexico – scrub, junipers, rocks. The only real differences are the acres of vineyards and olive trees and the bright red earth. We were cruising along at 300 KPH and I was trying to get a photo of the speedometer if it should hit 301. I missed it on the way down. There was a television screen dropped down from the ceiling of the cabin, and it was showing the local news. They went to an interview segment and the background looked vaguely familiar – it was the promenade along the beach in Valencia. Sure enough, 3 seconds into the spot there we were, My Lovely Wife and me, being interviewed. With Spanish subtitles explaining our Spanish in which we were talking about the weather and how the rain didn’t ruin our Semana Santa. I quickly fired off a few pictures to capture that most serendipitous moment. Truly, talk about the odds of all that coming together.

Finding a taxi at the Puerta de Atocha station required some walking since we picked the completely wrong door to exit. We got a nice guy who drove us to our destination and then got completely turned around in the warren of old streets. He turned off the meter to avoid running up charges while he drove up and down all these crazy little calles until we finally found our place. We asked him how long we should plan for a taxi on our departure day and he gave us his phone number and offered a ride if we called him. Juan, the apartment handler was there to meet us, a nice young guy from Mexico City who showed us around, collected the money and handed over the keys. It was lunch so we went searching for food, stopping first at the Mercado San Miguel and deciding to pass because all the eating required standing up. We settled on an outside café where I had the most unusual sandwich – three layers of bread, a gallon of mayonnaise, ham, bacon, salad and a fried egg. It wasn’t what I wanted but it was okay. Next stop was a grimy little supermercado for some breakfast supplies. The cashier was so fast that every customer’s purchases got mixed up at the end of the belt. Thankfully My Lovely Wife is a world class bagger.

We spent the next couple of hours wandering through some parks, the Palace Real and up and down some streets, actually managing to end up in Chinatown. How ironic and fitting. After dropping our stuff off we went in search of a meal and were drowned in the choices – Madrid is certainly a city of restaurants. An Italian restaurant off of the Opera Plaza was our ultimate choice where we dined on tapas – calamari, potatoes in garlic mayonnaise, manchego cheese and ham croquettes with a couple of glasses of Rioja. That not being enough dinner, we stopped for desert at Chocolateria Gines, the most famous chocolate place in the city for a cup and some Churros. Its reputation precedes it, it was mobbed and we struggled to find a table. As we ate, a group of teenagers came in and I asked them where they were from. Alberta and here on spring break in a class tour. They say near us and we handed over our remaining Churros as we left.

One thing I find interesting and annoying is the aggressive nature of the restaurant workers who try their best to drag in new customers. In Valencia and Barcelona, they hand you a business card and ask you to stop by. Here, they corral you with a menu and pull out a chair. On our way home one guy sort of accosted us and we stopped to have a look. He was not terribly annoying so we got chatting and told him we’d eaten and so didn’t need to do so again. My Lovely Wife asked him what kind of beer he had since every single restaurant we’ve eaten at, save one, only served Amstel. With great dignity he said “Cerveza de Espagña” and asked me inside to have a sample. We stood and had a great conversation with the bartender about the sad state of a country where the restaurants only serve Dutch beer and bad Dutch beer at that. His explanation – “it’s cheap.” I enjoyed my short glass of Cruzcampo and we promised to return for dinner tomorrow night.

My first impressions of Madrid are sort of confused – it’s a beautiful city but very loud, busy and active. In other words incredibly different that the old quarter in Valencia which was all about a slow way of life, quiet (at least before bars closed) and the sweet smell of orange blossoms. I think we’ll enjoy it here, but it’s going to be a different kind of week. 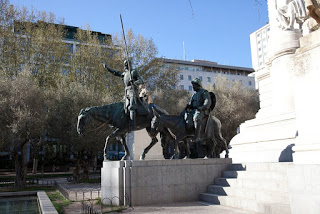