Today was museum day and after a stroll down Calle Arenal and a stop for coffee, and a chat with a mounted policewoman about her PRE mount, we went to the Thyssen-Bornemisza Museum. The Baron whose name graces the place sold his private collection to Spain for $350 million and today it’s housed in a very nice building just across the street from the Prado. Covering the span from 12th century religious retablos to 1970’s pop art, it is said to be the museum of major works by minor artists and minor works by major artists. We spent about 2 hours taking in the collection and it was very, very impressive. Nicely laid out, pleasantly presented and worthy of a long visit. After lunch at that universal purveyor of tourist food – Starbucks – we decided to head to the Reina Sofia Museum a few blocks down the street. The Prado was closer, but we thought it might be better to save it for a day when we had more time. Rather than walk on the crowded streets we paid 3 Euro and wound our way through the Royal Botanical Gardens. It was a good choice, far more peaceful and relaxing than the main streets. The spring tulips were in and the colors were splendid. The wind came up suddenly and the sky was turning a bit black so after completing a decent circuit of the gardens we decided to head back in the direction of our apartment to collect our umbrellas on the off chance that the weather forecast (calling for showers) would actually come true. We crossed a new neighborhood – Las Huertas – and stopped to chat with a young woman intent on getting us to visit her Flamenco restaurant. That thought was filed away for another night. It was now sprinkling a bit so we picked up the pace and made it home to collect our weather insurance.It was not yet raining so we decided to take in a couple of sights close to our neighborhood. The first stop was the last remnant of the original Muslim walls that surrounded the city in the 9th century. There is an interesting story about them, formidable and imposing from the outside, they presented a daunting challenge to the attacking Christian armies. In truth, they were poorly built on the inside, in order to save money and could have been easily breeched. But the ruse worked and the city was not taken for many years. From there we took a quick tour of the crypts below Madrid’s Cathedral (modern) and the Cathedral itself (also modern) before moving on to the Palacio Real. The church was a good stop, not nearly as imposing as the Gothic piles in other cities but nice enough. The Palacio Real was stunning in its obscenity. When you look at the way Europe’s monarchs lived, it’s not a wonder that so many of them fell victim to revolution. Room after room of stunning opulence, far more ornate than any person should need to retain their feeling of importance. The Palacio was completed in the late 18th century and has more than 2800 rooms; we visited somewhere in the vicinity of 50, each more unbelievable than the prior. Unfortunately no photography was allowed inside so the best I could do was the forum outside and a few streetlamps. Which were bad enough. The last section of the tour covered the armory, a most impressive collection of armor, weapons and saddles. As we left, it began to rain in earnest, and the wind made it almost impossible to use the umbrella effectively. We made it home before getting too soaked.For dinner, we went back to the restaurant where the host had graciously given me a taste of beer the night before. He wasn’t there, but the chief waiter took good care of us. Beer, water, tomatoes in olive oil and sea salt, an Iberian ham and cheese sampler and wonderful sautéed artichoke hearts accompanied by a great soundtrack of Spanish music made for a nice, nice evening. We closed out the day with a trip to the Mercado San Miguel for some homemade pastries for desert. 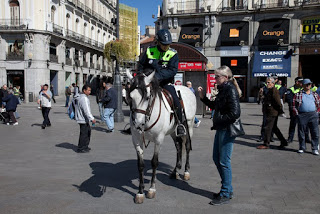 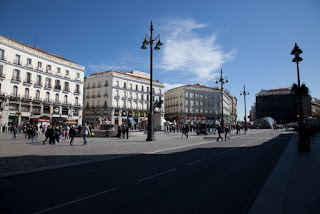 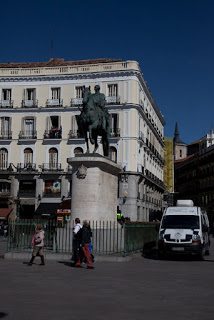 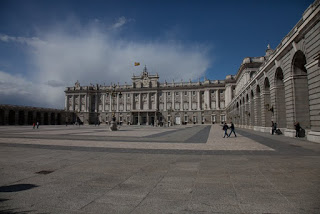 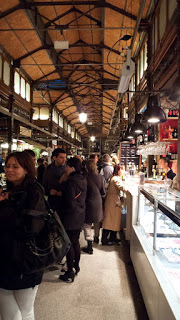