We’ve been having a bit of struggle here with jet lag, both of us seem to be unable to get on the right clock. It’s a first, we’ve never had that problem before especially with the modest 8 hour change to Europe. What it has meant is sleeping later in the night and getting up later in the morning and getting out and about around noon instead of our normal “the day begins at 7” routine down on the ranch. Friday though it paid off because by the time we did get rolling, the sun was out. The actual sun! And it was glorious, a bright blue sky and wonderful light on all the streets and buildings. I’ll admit, I was struggling a bit with the City of Light these past few days. It was comparing unfavorably to the sun-kissed wonder of Madrid or Valencia. On this day though, it took its place among sights for the eyes.

Our plan was to walk east for the length of Blvd. Saint-Germain from where it intersects with our street (Rue de Sévres) to its end at the Seine, then cross over and walk back to the west on the Île St-Louis and then Île de la Cité, stopping at Notre-Dame. Saint-Germain is a major shopping street so there were lots of things to look at. We stopped at a patisserie and bought a neat ropey thing filled with chocolate. The woman behind the counter laughed at my pronunciation of “une” as did the other customer. Moving on we passed stands selling fruits, vegetables, flowers and seafood, stopping to investigate a big tub of the largest scallops (Coquilles locally) I’d ever seen. I was carrying a handful of useless Euros (1, 2 and 5¢ pieces) that I figured I’d unload on some hapless beggar when one came into sight – a middle-aged woman wrapped in blankets with a brown and white pinto rabbit nobly standing guard on the front edge of her cardboard base. I handed them over took a moment to pet the rabbit between its ears and went on as she thanked us in 4 languages. I figure a beggar with a rabbit merits more consideration than one without.

The boulevard eventually curved to the north and we crossed onto the first island, purportedly home to the most expensive real estate in the city. The view up the left bank was spectacular, Notre-Dame on the tip of its Île, and the skyline of Paris to the right and beyond. I imagine the main drag, Rue St. Louis en l’Île hasn’t changed much since it was home to the Parisii and the Romans outside of the current resident population of tourist shops and crêperies. We watched as three gendarmes discussed where to place the ticket on an illegally parked Audi A6.

Once across the river again we took some photos of Notre-Dame from the Parc Jean XXIII, paying particular attention to the famous gargoyles. Like every major cathedral I’ve seen, this one is spectacular in its details. Between the embellishments, the actual support elements and everything they threw into it, it was hard to take enough photos to dig deeply into its details. Again, the improved weather made this the perfect day for our visit.

The inside was even more amazing, particularly the stained glass which I think the grand cathedrals in Spain do not do as well. Here they we not only incredible but active participants in the overall beauty of the interior. We wandered up one side and down the other, stopping to light a candle for my mother at the Chapel de St. Jacques and to take a lot of detail photos. The interior choir was lined with incredible painted carvings depicting bible stories.

The foundation of the cathedral was laid in 1163 and construction was largely completed by the mid 14th century although it was remained an ongoing project throughout the subsequent 5 centuries. In addition to expansions and revisions a lot of repairs were done due to destruction associated with the French Revolution.

By the time we got back outside, the weather was no longer my friend. Gray clouds were rolling in, the wind had picked up and the temperature dropped. Continuing on across the
Île de la Cite we stopped to admire the incredible gilded gates in front of the Palais de Justice. Large construction tarps wrapping some project on the buttresses of Ste.-Chapelle whipped in the wind.

We chose a bridge and crossed over to the Right Bank on our way to the Musée du Louvre. We had chosen this day for our visit due to visiting hours that extend to 9:45PM and a suggestion in the guidebooks that Friday even is a less maddening time to visit.

The first thing that strikes you about the place is its size – it’s enormous. The interior courtyards are so large that it was almost a struggle to make ourselves across them in the cold wind. Begun in the 12th century by Philip II as a fortress, it has undergone a long history of building and remodeling. The improvements peaked under Francis I when it was redecorated in French Renaissance style and became the home to his collection of art and antiquities. Leonardo da Vinci’s Mona Lisa was acquired during this period, a fact I find sort of interesting as I have always tended to think of museums as something built recently and filled up in the last century or so. In this case, the Mona Lisa has been hanging pretty much in the same place for almost 600 years. Work on the place more or less ended in 1482 when Louis XIV moved the royal household to the less limiting Versailles. Since then its been associated with art and artists almost exclusively. It became a public museum during the French Revolution and officially opened to visitors in 1793.

Today the entrance is located beneath two glass pyramids designed by I.M. Pei and added in 1993.

Based on the size of the place and the collection, we knew well in advance that a single 5 or 6 hour visit wasn’t going to cut it so we picked the Venus de Milo and the Mona Lisa as our two “must sees.” With that in mind we struck out for the Denon wing where they were both conveniently located. And this is where we ran into the much acclaimed Louvre Map. The designers are very proud of it and it is quite pretty. But like some well designed museum maps, it’s not quite as user friendly as they’d have you believe. I recall the Prado map, also pretty and concise, that often gave the impression that you could get to Gallery 38 from Gallery 37 when in fact that route meant retracing your route back through 36, 35 and 34, into 19 and then out again into 40, and 39 before arriving at your destination. This was much the same, and not helped by the fact that many times galleries were closed and so the route was blocked altogether. We spent far too much time standing against the wall at gallery intersections trying to hold the map in a way the made the tiny drawings look like what was actually on the ground in front of us. But we finally did find the Venus standing majestically in the center of her own room. I took one quick photograph before a group of Chinese tourists moved in behind her to listen to their guide. While I waited for them to evaporate, I watched teenaged Chinese girl in a classic pose. Holding the arm of her father, she had that canonical pout so common on young Chinese women being forced to do something she didn’t want to do. She had long bangs tucked under her oversize designer glasses and had her head resting on daddy’s shoulder. She just exuded privileged boredom. I think my entire 5 years in China were summed up in that sight and the contrast between her and the Venus was amazing. As the Chinese become more and more wealthy and head out into the world to absorb our culture, scenes like this will become very commonplace. I would guess that the museum crowd yesterday was at least 30% Chinese, almost all young and well-dressed in that silly Chinese cartoonish sort of way and spending their time either playing with their cell phones or taking photos of everything with their very fancy Canon cameras, including  in one case of the end of an ice cream cone.

Once the Venus was checked off the list it was off to find the Mona Lisa. Once again the map sent us down a long series of twisty-turny corridors that brought to mind Dungeons and Dragons. This time though there was an unexpected benefit – we got completely lost in the Egyptian Antiquities collection (after getting pre-lost in the basement display of the original 12th century building foundations.) Talk about serendipity, I could not have been happier to be off the grid in such a place. Parchments, mummies, carvings, sarcophagus, temple rooms – it was spectacular and if I never saw another piece, I was happy to spend a couple of hours roaming around in this part of the place.

We eventually did find out way to the Mona and she was notably crowded by a throng of admirers but with a little diligence I was able to sidle my way directly in front of her. While beautiful, I was struck by two things – her size (small) and her coloration (drab.) I think my expectations were greater than the reality but I’m still glad we made the time to find her.

After coffee at the museum cafe, we decided to have one last go at a one piece I discovered while reading the map over my museum Americano – Vermeer’s The Lacemaker. She was housed in the one wing we’d not yet visited so I plotted a course from where we were to where we wanted to be only to discover that through a series of misunderstandings and closed corridors, we couldn’t get there from here. The upside was a pass through yet more Egyptian Antiquities we’d missed the first time (apparently Egyptian art is strategically placed to entertain the lost) along with an incredible collection of Etruscan terra cotta figurines that I would not have been sorry to miss if it had meant a faster route to where we wanted to be. Eventually it became clear that the only hope was to just go out to the very beginning and enter through the main hall which we did.

As it turned out, this part of the museum became my favorite. It was quiet, nearly empty and more or less clear in its layout. Dedicated to the “Northern School” or Dutch and Flemish painters, the collection was wonderful. And the peace and quiet were well appreciated. A nice way to cap the visit.

We left through the Tulleries exit and via a mall that we didn’t know existed. Some sort of Chinese New Year celebration was going on that involved a petite woman sealed inside a confetti filled bubble walking through the crowd. After absorbing 20 centuries of culture, I wasn’t quite sure how to interpret that sight. We made our way outside where now it was night, an odd sensation having entered during the daylight. Off to the distance the Eiffel Tower was brightly lit and the spotlight on its top was doing jerky circles across the city. We made our way home through the chilly streets, stopping for a takeout dinner of gallette du pomme de terre, quiche lorraine, quiche l’oignan and a bottle of Bourgogne. 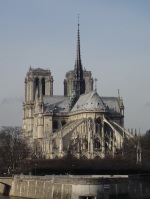 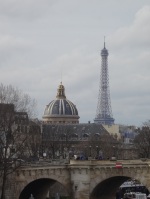 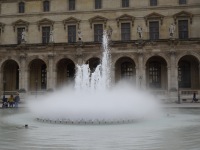 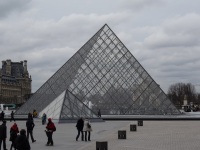 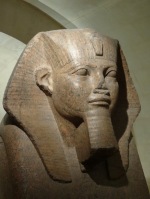 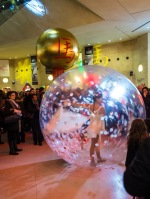