Or last day in the City of Light. The weather was not wonderful and neither was our collective so we decided to minimize the beat down and visit Sainte-Chapelle, one of the last fine churches we’d not seen. It was founded in 1248 by King Louis IX, ostensibly to house his collection of holy relics, including the Crown of Thorns and a piece of the One True Cross. At the time, there was a big market among the royal and wealthy so many of these genuine articles were in fact sold to many kings of Christendom. In any event, what’s special about this particular church is that its soaring walls are almost entirely comprised of stained glass.

To avoid that one last walk, we took the subway although sometimes I wonder if the amount of stairs involved in switching lines doesn’t equal the number of steps it would take to just walk there. We jumped on at Vaneau, across the street from our house and jumped off at Cité, across the street from the chapel. The station at this end was interesting, built out of riveted steel plates that gave the effect of being in a giant boiler.

Naturally it had started to rain and the wind had picked up so I was glad of the umbrella I brought. We had a short line to navigate and a thorough security check as the chapel is enclosed in the Palais de Justice, itself an old building formerly known as the Concierge. Formerly a prison, it was where most of the high profile prisoners were held during the French Revolution prior to their heads being lopped off.

It’s never a good sign when there is a poster in front of a site apologizing for the inconvenience of construction noise and dust. Today was no different. Once inside it turned out that half the church was shrouded in scaffolding and tarps and so we were unable to fully appreciate the beauty of the place. Most interesting was a documentary film crew using a drone to film from above, quite a juxtaposition of times and technologies, right before our very eyes. We spent little time, took a few photos and headed back home on the Métro.

Given MLW state of illness and this being our last day, I decided I would try to put what time I had left and took off for the Pompidou Center to see just how good their collection of modern art was. Again on the Métro, this time stuffed with secondary students on their way home from school. I got out at Etienne Marcel and walked down the Rue of the same name until I finally found a sign pointing the the center. It was kind of an odd approach, sort of through a tunnel formed by seedy apartment blocks, the kind of place I would not walk at night. One thing was immediately clear, here in the 7th arrondissement, we’d been living in residential Paris. The center is on the edge of the 3rd and 4th and in the Marais and what a difference. Dozens more restaurants, coffee shops and opportunities for interesting ethnic food. Far grittier, far more alive. Something to consider should we decide to come back in the future.

The Pompidou Center is a very large and unattractive building, looking much like the interior of a power plant. Opened in 1977, the exterior is covered with (yet more) scaffolding and pipes. The courtyard features 6 large white cruise ship funnels and you are carried to the upper galleries via escalators in large clear ducts attached to the outside of the building. The view from the top was quite spectacular and must be really glorious on a sunny day. I caught a lot of rain and gray but it was still stunning.

The collection is limited to 20th century modern art, something I generally like. But I didn’t think it was earth shattering. I’ve been to many modern collections and this one was not even in the top 5. Probably the most interesting for me was discovering where the other half of the population of China had been hiding when I was in the Louvre on Friday. Today the place was filled with young people who had flown halfway around the world to sit in a museum and play with their cell phones. I actually stood by one couple and ran the words over in my head thinking that I’d say it if I could get it right, but they were so rapt by texting that I hated to break the spell.

I covered 3 floors and headed back down. It was now really raining and blowing but I decided I’d had enough underground travel for one day and so decided to walk. The worst of it conveniently stopped by the time I hit the Seine and the rest of the way home was not too bad. I took a couple of different routes and managed to find two walking streets lined with small cafes and coffee bars, just the thing we could have used if we’d had a bit more time and better health.

On the whole, the trip was “okay.” We started out being cheated by a fake cab, arrived at a freezing albeit nice apartment and then got sick two days into the visit. We had some nice weather, two good meals out, good museum visits – Louvre, D’Orsay, Cluny, many good walks, great visits with my friends from China and some excellent food from Le Bon Marché. I had churros which makes any trip a success and I think we’re ending with a nice Paris overview. One key learning – perhaps early February isn’t the best time to visit northern Europe, although given the importance of our anniversary and my “big” birthday, I can’t imagine spending it another way. 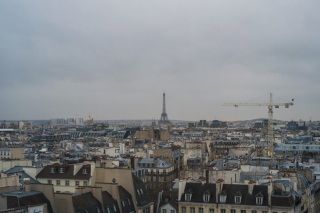 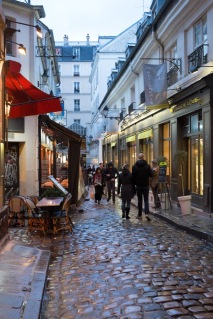