Another sort of half day of recovery. We went out with the intention of visiting the Institute du Monde Arabe, and excellent Islamic art museum, got about half way there, stopped for coffee (where I said “dui bu qi” for cutting in front of a Chinese student which made her jump and respond “Thank-you in English,) spent some time assessing our health and decided to head back inside out of the cold. Instead of walking all the way back down Blvd. Saint-Germain though, we caught the Métro at Odeon station and rode it back. What a fun adventure, it was easy, the ticket machine made decent sense and you didn’t need to retain the pass to get out of the station. Far better than Shanghai or Beijing albeit not nearly so shiny and new. One interesting thing – the trains are far smaller in terms of length and car size than what I’ve ridden elsewhere.

MLW was really worn so I dropped her at the apartment with the daily edition of the International New York Times (no more Herald Tribune) and went back out, figuring I’d head to the Jardins du Trocadéro, the park on the far side of the Eiffel Tower. And figuring it was cold enough, I’d continue in that Métro vibe that I’d just discovered. So down the block the M10 Vaneau station, a quick transfer to the M6 at La Motte-Picquet-Grenelle and 4 stops later I was there. The last section of the line was above ground, offering a great view of the city and down the Seine.

From the Left Bank, the Trocadéro looks very interesting, at least at night. There are a couple of carousels and lights and fountains that make it seem quite enticing. On a cold winter’s afternoon though, not so much. Just a lot of marble and cold fountain water blowing across the sidewalk. Tons and tons of people though, most doing one of those goofy shots were the subject lines up their hand with the side of the tower. Many Chinese also, by far the most common tourist breed. As it turns out, we read an article a couple of days ago that cited an extraordinary number traveling to Europe for their Spring Festival, a holiday I’d completely forgotten about. In China, it’s a time to get out, or stay home because the travel during those weeks is known as the “Greatest Human Migration in History” for good reason. Seems now there’s a spur route to Paris.

I stood at the top of the hill and took a few photos of the Tower. The sun was coming and going through holes in the clouds but none seemed to line up properly. The dome of the Hôtel des Invalides did catch the rays on occasion, gleaming gold against the broken sky. A bright fitting tribute to L’Empereur Napoléon who rests there peacefully. The wind was far more harsh up where I was so I went down the stairs towards the tower, avoiding the spray from the fountain. It was there that I spotted Churros in the hand of some tourist. Scanning the area I spotted the source – a small trailer by the name alluring name of aux delìces du pont d’iéna or “The Delights of Lena Bridge” which I think could not have better described their fare. Why the sign on the trailer misspelled it is unclear to me as the name commemorates Napoleon’s victory over Prussia in the Battle of Jena and so you’d think the might have gotten it right. But no matter, I sauntered over and pointed at the giant Churro model and said “Une” to which the man behind the counter said “Churros” and to which I responded “Si, churros” which made a couple of French customers laugh at me.

The guy in the booth had a big drill-press-like machine hovering over a vat of boiling oil. He’d lower the handle an churro dough would cascade into the oil, each piece just the proper length. He’d fish them out, put them in a cardboard cone, dust them with powdered sugar and then dollop them with a big ball of Nutella. Okay, so why haven’t the Spaniards thought of that yet? I mean Churros and Nutella? I was so excited to start eating that I took off without the complementary paper towel, an oversight that proved propitious as the amount of now molten Nutella on my hands and face increased with each step and bite. The cone proved wholly inadequate to the task of containing the churros and so I became the tourist stumbling along under the Eiffel Tower, face masked in Nutella, leaving a trail of churros on the ground to the delight of the crows and pigeons. Eventually it got so bad I just threw away the remainder used my Kleenex supply to clean up the best I could and went off in the direction of home wondering what kinds of diseases I’d picked up by licking Nutella off the fingers that had recently grasped a subway pole.

If you don’t pay attention, you add a lot of distance to your Point A to Point B journey in a city like this. The streets and boulevards all radiate from fixed points, roughly following the course of the Seine. So if you’re heading SE for example, sometimes you end up walking NE before heading S which means a lot of extra steps. I knew where I was going but really didn’t pay attention to how I was getting there and so my giant zig-zag walk home was probably longer than it should have been. But no matter, I got there eventually.

Last night was the final one for my friends Dermot and Hui and so we wanted to do something. Neither of us really felt like going hunting and gathering for a restaurant, and so when Dermot suggested we dine in at our apartment, the answer was “why not?” I met them at the Métro station, we shopped at Bon Marché collecting quiche, baguette, risotto and duck confit and then had a nice dinner in. Far better than hunting in the cold for an adequate menu. 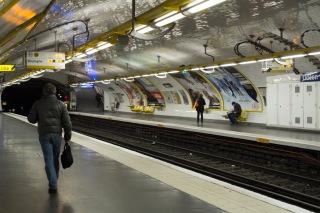 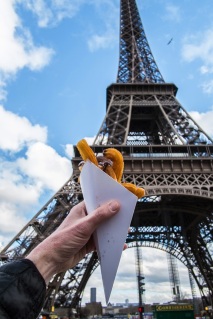