Skip to content
Date: March 29, 2017Author: tbaroundtheworld 0 Comments
We finally found where they’ve been hiding the restaurants.
We took a long walk our first night here and ended up in the Brera district. It was getting dark and we thought it would be best to head back in the direction of our apartment, so we turned off the street we were on without investigating what appeared to be a block of outside cafes. We filed the thought away for another night.
Well, tonight was the other night. Having done a bit of research, and discovering an alternate, shorter route back to the place, off we went around 7 PM. I forgot my camera, so iPhone photos would have to do.
This is business-like neighborhood. Lots of traffic and no charm. But as big cities go, it’s not too bad. We passed many interesting stores, the only remaining gate to the 12th century city, the most amazing kitchen store I’d ever scene (Officine Gullo Firenze) and some other interesting things.

Half-hour later and we found ourselves in Milan’s street-side café district. Stopping at the first place we found, we decided to give it a whirl. It was nice, sitting inside to avoid the smokers was like being in a neighborhood joint in the North End of Boston. Italian pop on the radio, checkered tablecloths, grandpa filling the wine glasses. MLW had Pennetta al Salmon and I had risotto Milanese with Oso Bucco. Mine was excellent, hers was not as good as the previous restaurants. A couple of glasses of wine, some bread and acqua frazante (bubbly water) and it was a nice evening. I paid the 45 € tab with a 100€ and the waiter asked me (jokingly) if it was all set.
We decided to check out the remaining restaurants as we were leaving, filing them away for future choices. I had a friendly conversation with the maître d’ at the next place up the street who complimented me on my Italian, saying that he could understand me. I rattled off some Chinese and he declared himself incapable of judging me in that language. We wandered around for a bit, and found many more places on the side streets. Not Sevilla or Madrid “many,” but enough to keep us busy for the remaining time. I decided that the evening would be incomplete without gelato so I stopped into an artisanal place, where a young woman with a giant black chef’s hat was serving. I had two flavors, chocolate and black cherry.
A nice night, a good dinner, a walk through some different neighborhood, a stop to read the bar menu at the Carleton Hotel (lots of Benzs and Bentleys and 21€ “breakfast martinis”) and home at last. 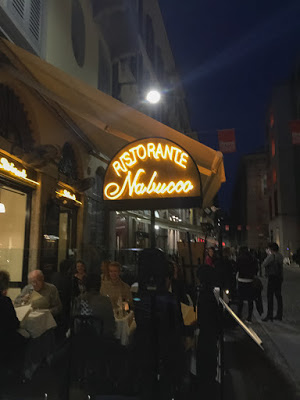