Skip to content
Date: March 30, 2017Author: tbaroundtheworld 0 Comments
The area around Como has been inhabited since at least the Bronze Age. A Celtic tribe known (to the Romans) as the Orobii had small settlements in the woods around the present city. It came under the control of the Romans in the 1st century BC, and the town center was moved and consolidated on its present location by order of Julius Caesar. The swampy southern tip of the lake was drained, and a traditional Roman grid was imposed. The town was named Novum Comum.
Its fortunes ebbed with the fall of the Roman Empire and it was captured in 774 by Charlemagne who turned it into a commercial center for the region. 400 years later it was on the losing end of a long war with Milan, but that setback was overcome in 1162 when Frederic I Barbarossa destroyed Milan. He rebuilt the city’s fortifications, some of which remain today on the south side of the old city center.
From then on, Como’s importance waned as it came more and more under the control of Milan, and followed its history of conquest by the Spanish, French and Austrians. In 1859, Garibaldi chased the Austrians out of the area and Como became part of the newly formed Kingdom of Italy.
Having largely conquered the sites of Milan we decided that today would be a lovely day for a road trip. There are many choices within an hour or two of here, Pavia, Bergamo, even Florence on a stretch. But with the goal of less train and more sightseeing, Como seemed like an excellent choice. So, I did a bit of research on Google Maps and plotted a course that conveniently started at the subway station just around the block from our apartment. After coffee and brioche, we were on our way.
The Milan Metro is among the best I have ridden. Easy to navigate, nice cars, clean and fast. We took the Red Line all the way to its end in the northern industrial part of town where we switched to a regional train at Sesto San Giovanni. There was a bit of time to kill so we wandered outside the station. Not a compelling neighborhood, shabby apartments, a flea market and many abandoned factories on the other side of the tracks.
The train was a lot like our local Rail Runner in size and speed, just a bit older. We wound our way out of the tired northern suburbs and out into the countryside, but being a train line the scenery wasn’t that attractive. Aside from one stretch that had a handful of colorful Italian villas at the top of a heavily wooded hill. The trip took about 45 minutes and ended at (another) San Giovanni station on the west side of Como. From there it was a quarter-mile walk downhill to the lake.
The lake itself is glacial in origin and was known to the Romans at Larius Larius. It is 56 sq. miles in size, and the 3rdlargest in Italy. Its depth extends to more than 1,300 feet, making it one of the deepest lakes in all of Europe and its absolute bottom is more than 600 feet below sea level. The area has been a popular getaway for the rich and famous since Roman times.
We went straight to the water and sat for a bit, looking at the villas, watching the big water taxis come and go along with the occasional sea plane. The Como-Brunate Funicular (hillside train) could be see crawling up the hill through groves of trees that had not yet greened up. Tourists seemed a bit scarcer here – some Germans, some Italians, but mostly locals sitting and enjoying the spring morning. After a bit, we decided to go find lunch, passing by many waterfront spots before settling on Lantica Riva, a very posh spot serving out of a 200-year-old stone house. The waiters were all in suits, the tablecloths linen, and the location just ideal. We started thinking “pizza” but the menu looked so elegant and interesting that we decided to go with the surroundings and have an appropriate meal. I had gnocchi in a saffron cream sauce served on a bed of pureed asparagus, MLW went local with a risotto served with sautéed lake fish. A couple of glasses of Lombardy wine finished it off. It was an excellent meal in every way, and the more we sat there, the more we thought we needed to find a way to here. 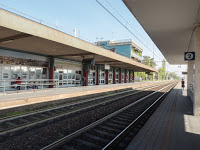 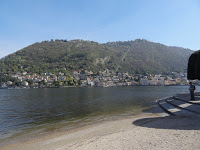 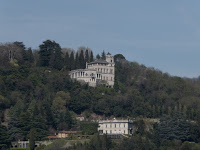 The town isn’t very big and doesn’t have a lot of features so we wandered up the main pedestrian street and stopped in at the cathedral. Also known as The Duomo, it is reputed to be the final Gothic cathedral built in Italy. Constructed on the site of an earlier Romanesque church, building began in 1396 and completed nearly 400 years later in 1770. It holds a modest art collection that includes some important 16th century tapestries. The center cupola is very beautiful. A nice church, not too overwhelming in scope or decoration, many areas being closed for worship which allows it to retain a small community feeling.
From there we made our way up and down the streets, the town reminded us of Barcelona, with the age and style of the architecture being very similar. The southern end of the old city center is bounded by the remains of Roman and medieval walls, including a couple of nicely maintained watch towers. 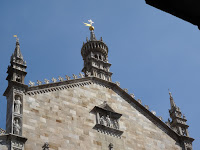 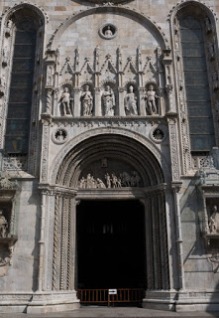 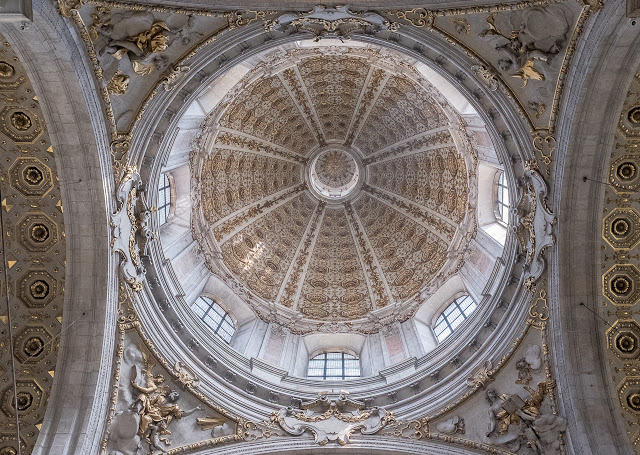 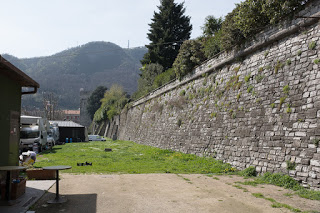 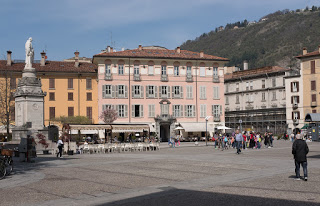 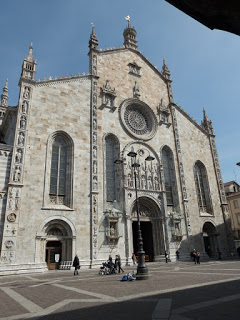 We’d purchased open tickets for trains that run every 30 minutes so we were not exactly pressed for time. We took a leisurely wander back to the station, sadly having to go up the 100 or so stairs we had cheerfully descended at the beginning of the day, arriving 9 minutes before the arrival of our train. Perfect timing. The ride back on it made me wonder what it would be like in July, it was that hot. And I never thought I’d find myself happy to be back in the subway where the atmosphere was better. But there we were, roasting topside across the plains of Lombardy and rewarded with a cold ride home under the city of Milan. 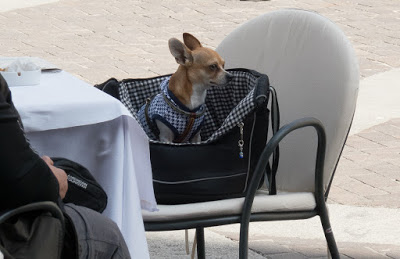